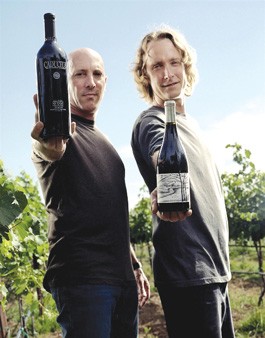 Blood into Wine is a documentary about Maynard James Keenan, the singer from Tool, Puscifer and A Perfect Circle, and his experiment making wine from the limestone and volcanic ash-riddled soil in Jerome, Ariz., where he’s hung his hat since 1995. Rock stars making wine is not a new concept, but Keenan has a refreshing obliviousness combined with a down-to-earth passion throughout a film that’s long on vineyards and short on such songs as “Prison Sex” and “Stinkfist” that helped define Keenan to his many fans. As he says to the camera, “We’re out here digging in the dirt. No dog-collared, eyeliner chicks allowed.”

Keenan and his partner Eric Glomski, pictured above, spend much of the film debunking myths about Arizona’s dry climate and barren soil, and successfully convincing writers from Vinography and Wine Spectator that their crazy experiment in the desert is worthwhile. In one of the film’s most moving scenes, Keenan breaks down talking about his mother, who lived as an invalid for 29 years before passing away in 2003; later, when the Spectator‘s James Suckling tastes the wine named for her, opens his eyes wide and approvingly exclaims “Finally!,” it’s hard not to share in the emotional victory.

Familiar passages on the winemaking process will bore most Sonoma County residents; this is a documentary for the Tool fans who lined up at Whole Foods markets last year to have their bottles of Keenan’s Caduceus label signed in person. Much of it comes off as an advertisement for them while being a critique of the snooty wine world (“If you have a Wal-Mart-y palate, you have a Wal-Mart palate,” Keenan says, “That’s fine. You have to trust what you like.”). References to The Royal Tenenbaums and tipsy talk with actress Milla Jojovich and comedian Patton Oswalt, who offers Keenan offbeat marketing tips, enforces the left-field approach.

Whether or not Tool fans will embrace the documentary is dependent on how far they’ve been willing to follow Keenan thus far. Perpetually uncomfortable with fame, the singer uses a recurring fake talk show and a blatantly staged reality-show pitch in the film to underscore his unease. One thing rises above these gimmicks, though, and that’s Keenan’s honest, no-bullshit passion. He says it best when discussing what Tool fans can get out of his new career: “They’ll discover a world that has more to do with wine and art and cuisine,” he says, “than with short-tempered rock stars.”