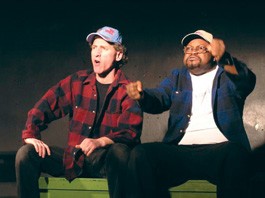 Larry Jay Tish and Ron Jones were two actors who booked themselves into the Edinburgh Fringe Festival before they even had a script. They did, however, have an idea. Namely, that the black and Jewish communities, once united by exile and persecution, had grown increasingly apart since the 1970s. How could they convey the need to repair that growing rift? And while they were at it, address the need to heal all people while sparking a serious discussion? But, you know, have it be funny too?

The bar was set high, and after writing furiously in a hotel room for three days straight, the duo emerged with “The Black / Jew Dialogues,” a series of sketch-vignettes that explore prejudice and bias head-on. The show was an instant hit, and for the last four years Tish and Jones have been criss-crossing the country performing what Jones calls “an American cultural discussion about the changing face of who we are.”

Using comedy to cover a timeline from the Pharaohs in Egypt to gangsta rap, Jones remains resolutely serious about the show’s message. “When people hear that we’re talking about race in America, they freak out,” he says on the phone between East Coast tour stops. “They see King Kong knocking over buildings and kicking over cars, and everyone is terrified that the very idea that we’re going to have this conversation is going to destroy us all. But we say this in the show, everybody’s dirty here in America, everybody’s stepping on somebody’s neck, just like at some point, someone’s been stepping on your neck.”

The show itself, featuring over-the-top stereotypes laid bare for all their lunacy, lasts about an hour. What happens afterward is the insisted-upon discussion time, where Jones and Tish moderate a frank, open discussion about people’s prejudices. This discussion sometimes lasts longer than the show itself, and Jones says he’s learned an enormous amount about people by just listening.

“One thing that resonates very strongly in me is that a lot of the fear, angst and concerns that people have across the country are pretty uniform,” he says. “It’s the same thing coming from all corners in the country. People are worried about getting theirs, so to speak. People hate the idea that somebody is getting something for nothing.”