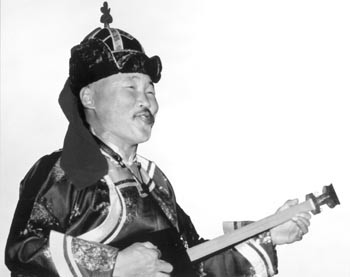 CALL IT AN EPIPHANY. Looking for a way to keep his mind off his wife’s debilitating illness, Paul Pena in 1984 turned to searching short-wave radio broadcasts for foreign-language lessons. “Rather than crawl into a bottle for the rest of my life, I wanted something to occupy my mind,” says Pena, noting that his wife’s long illness and subsequent death had left him severely depressed. One night he encountered eerie, oscillating whistles that immediately caught his ear. “At first, I thought the radio’s diode had blown out,” says Pena, a blind bluesman who penned the 1977 Steve Miller hit “Jet Airliner,” “but then I realized there was a discernible melody. So I listened some more and discovered it was Radio Moscow and the sound was a guy singing two notes at once.

“Oh, man, all my training told me that was impossible, but I became determined to learn it!”

It took years to track down (the announcer had given the wrong pronunciation of the singer’s origin), but Pena eventually traced the strange sounds he heard that night to a polyphonic throat-singer from the isolated Republic of Tuva in Central Asia.

And, most remarkably, he even mastered the difficult technique.

The rest is history, thanks to a recent film documentary by Roko Belic. His Genghis Blues–which premiered last fall at the Mill Valley Film Festival–chronicles the amazing journey that in 1995 took Pena from urban San Francisco to a remote region of the Asian continent, where he became the first Westerner to participate in a rigorous throat-singing symposium.

The documentary is one a several recent projects to put the remote Central Asian republic in the spotlight. Once all but forgotten, the Tuvans–including Huun-Huur-Tu, a group of Tuvan throat-singers who will perform Feb. 16 at the Luther Burbank Center for the Arts–rode into town on the hems of the Gyuto Monks of Tibet. Those purveyors of guttural polytonal chanting were “discovered” in the mid-’60s by Huston Smith, UC Berkeley professor of comparative religion, during a trip to Nepal. The monks’ art–the ability of one person to sing multinote chords–was considered a physical impossibility by Westerners.

THE MONKS ARRIVED in the States through the back door, so to speak, when Windham Hill Records founder Will Ackerman recorded them in the mid-’80’s. The monks, in turn, found a receptive audience among fans of New Age music in the then-emerging world music scene.

But neighboring Tuva–a simple horse culture on the Asian steppes that was the home of Genghis Khan and was under iron-fisted Soviet rule since Joseph Stalin’s 1936 invasion–remained shrouded in mystery and closed to travelers. In 1990, the Smithsonian Institution through its newly acquired Folkways Records subsidiary released Tuva: Voices from the Center of Asia, a collection of short tracks–including a 15-second imitation of a reindeer–demonstrating various Tuvan throat-singing techniques, but offering few full songs. However, these haunting sounds got a further boost in 1994 when PBS-TV’s Nova science series profiled Nobel Prize-winning physicist Richard Feynman, who had developed a fascination with Tuva. Feynman’s plans to travel there were cut short by his 1988 death. Ironically, permission to travel to Tuva arrived at his home just weeks after the physicist’s funeral.

Still, even in death Feynman introduced millions of TV viewers to polyphonic singing. By 1992, Tuva became a free nation of 300,000, mostly practicing Buddhists with a strong shamanic orientation. In 1994, a group of Tuvan throat-singers–led by the legendary Kongar-ool Ondar–journeyed to San Francisco’s Palace of the Legion of Honor, where they met Paul Pena and later invited him to their homeland.

At that point, things began moving fast–at least in terms of Tuvan musical history. Huun-Huur-Tu followed in Ondar’s footsteps with a series of Bay Area appearances. In 1996, the New Jersey-based Ellipsis Arts label released the definitive Deep in the Heart of Tuva: Cowboy Music from the Wild East, a single-CD and book set that included tracks from a variety of Tuvan throat-singers–including Ondar, Pena, and Huun-Huur-Tu–and a full-color booklet that traces the history of this faraway land and even offers recipes for the native blood sausage.

That was followed by Huun-Huur-Tu’s 1997 release If I’d Been Born an Eagle (Shanachie), a blend of Tuvan throat singing and haunting Russian melodies.

This year already has seen a double whammy. Tuva, Among the Spirits: Sound, Music, and Nature in Sakha and Tuva (Smithsonian Folkways) offers unprecedented field recordings of songs and nature sounds from the southern Siberian region that serves as a musical wellspring for Tuva. And Ondar gets the glittering Hollywood treatment on the newly released Back Tuva Future: The Adventure Continues (Warner Bros.), a collection of remixes that teams Ondar with the likes of country stars Willie Nelson and Randy Scruggs (a couple of tracks even feature samples of Richard Feynman), all cloaked in beat-heavy techno arrangements tailor-made for the rave dance set.

The strange thing is, it worksÑthough world music purists may want to run for cover.

Meanwhile, with Genghis Blues playing the film festival circuit nationwide and destined for home video release, expect the Tuvan cultural expedition to the West to thrive. Indeed, Pena believes that Genghis Blues and the recent CD releases could open a whole new world for Western audiences. “I think this is an important musical technology that for the most part we haven’t been made aware of,” he says. “I’d like to see someone who is well known use it to make more people aware of it.

“For all intents and purposes, this is a wholly new instrument. I’d like to see it develop.”