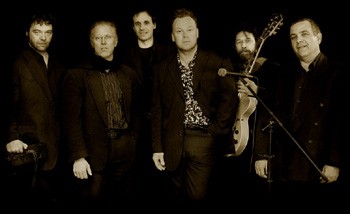 Boys in the band: TPR frontman David Carter, third from right, describes his band’s sound as hybrid of jazz and country.

Imagine if, after completing his landmark album King of America 20 years ago, Elvis Costello had continued working with those legendary session players, delving deeper into American roots music. Then imagine that his lyrics were more funny than angry. Next, imagine that all the different styles were combined into each song, with blues guitar, bluegrass fiddle and shuffling jazz drums melding in a seamless Americana orgy. Now, imagine this blend with Leonard Cohen and XTC’s Andy Partridge trading lead vocals. Add the Beach Boys to backing vocals, and you’re still only scratching the surface of the sound of the Trailer Park Rangers, a western Sonoma County sextet that fuse American musical forms like never before–and continue to evade adequate classification.

Even singer-songwriter David T. Carter can’t describe his band properly. “It’s lyrical and it’s musical,” he says, with his blunted Australian accent. “You can dance to it, or you can watch it.” During a recent show at the Tiburon International Film Festival, Carter simply told the slightly puzzled but still-dancing crowd, “We’re influenced by ’50s and ’60s American groups.” Then he took a request for a waltz number.

Labels are pointless for Carter’s exhilarating music, which coalesces bluegrass, rockabilly, jazz, country-and-western, blues and rock and roll into his own creation. Even ska finds its way into the mix on the song “Drag Queen,” where fiddles and swing horns trade licks over an unrelenting drumbeat. “There is a connection between reggae, ska and country that I always thought was evident,” says Carter. This would be a crazy statement had Willie Nelson not released a reggae album last year.

It was a long trailer ride to the North Bay—style roots-fusion for Carter, but music is in his genes. Born in 1964 in Sydney, Australia, he was raised in a very harmonious household–his mother was a choir singer and his father was a jazz musician. The constantly spinning jazz records were a point of contention between him and his dad. “I liked jazz, but for me, jazz did not have enough humor in it,” recalls Carter, who also relished hearing country singers Charlie Rich and George Jones on the radio. His father, he says, “did not appreciate somebody like Johnny Cash and understand his musical worth.”

At age 14, Carter was “inflicted” with what he calls “the language of song” when he watched a film of Neil Young performing. But after picking up a guitar, he soon learned his eclectic taste was out of step with his peers in England, where his family had moved. “While everybody was listening to punk, I was listening to Slim Whitman,” Carter says. “This is a man who wore a pair of white loafers and a cardigan, and I thought he was darker than any of those punk guys–this guy was generally a dark soul.” He eventually found success in genre-mixing when he heard Australian guitarists the Emmanuel Brothers. “Tommy [Emmanuel] was a Chet Atkins disciple,” he says. “That was the perfect hybrid of jazz and country, and that’s exactly what I loved.”

After stints in several wide-ranging but artistically unfulfilling bands, Carter finally made his pilgrimage to America. “I was trying to create something that is uniquely mine,” he says of his move to L.A. “I just wanted to play my music.” But once again Carter was out of step, as hair metal still ruled the local music scene. “It only took me three months to drink all my money away,” he remembers. “By the time I came to San Francisco, I had $60 in my pocket.”

The Bay Area music scene proved more heterogeneous for Carter, and he started playing open mics around the city. Soon, he added a fiddle player, then a mandolin player and before he knew it, he had formed a full band of like-minded players. “The rhythm section was the hardest thing to put together,” he recalls. “I remember going through a lot of drummers, trying to find so many different takes, rhythm-wise.”

With a great band willing to indulge his diverse musical fancy, Carter needed just one more thing: a name. His then-wife thought of the name Trailer Park Rangers, which Carter loves as a tool for surprise. “[The band] has everything that perhaps you would not be expecting from white trash people,” he says.

Although the band name may sound like an episode of The Jerry Springer Show, Carter doesn’t subscribe to the pervasive snobbery directed toward impoverished mobile-home residents. “Look at where I was raised,” says Carter, who grew up around refineries, a prison and directly next door to a garbage dump. “We were about as low down on the ladder as you could possibly get, but we were a happy family–by no means were my parents white trash.” Actually, the band’s name is benign compared to one of his former groups back in Sydney, the Mudbuttons. “‘Mudbutton,'” he explains, “is another term we use for a dog’s asshole.”

The name certainly evokes the rural origins of all the styles’ respective sources, and is perfect for Carter’s migrant lyrical themes. “It’s road music,” says Michael Houlihan, offering his own definition of the band’s sound. The founder of Barefoot Wine Cellars has been a very active supporter of the band ever since they first played a winery event back in 2004. Houlihan believes they’re the antidote to the poison of today’s unoriginal lyrical landscape. “So much music today seems to be trite, you know, ‘I’m going to put a cap in your head’ or ‘My girlfriend’s ran off with my dog.’ I’ve heard it before.”

One of Houlihan’s favorite Rangers songs is “California,” which explores the disillusion of our state’s paradise-seeking newcomers. This motif of mobility makes sense, considering Carter’s life. “I got used to being that dude that walked into the classroom with everybody staring at me,” he says of his many childhood relocations. Carter even drives a white Bronco, a car infamous as a getaway vehicle. He feels kinship with his band mates in this regard, both literally and musically. “We’re very much drifters and wanderers,” he says. “We don’t really belong to any one thing.”

Houlihan has dubbed the group’s music “the soundtrack to the wine country,” a circuit that usually books cover bands. Carter recalls that the Sonoma County music scene was just as unexciting. “At the time I moved up here in ’96, most of the circuit up here was comprised of white blues bands,” he remembers. “Granted, they’re all good, but we were the only really cutting-edge, original band that was around.” Carter has seen some progress, though. “Over the past 10 years, we’ve seen the scene get better and better,” he says optimistically. “I think that Sonoma County is really starting to become a little like Austin.” But there is still no band that sounds like the Rangers, Houlihan reminds. “It isn’t rap, it isn’t country, it’s not jazz, it’s not blues, but it is certainly a fusion, evocative of all those roots,” he says, giving proper description another shot.

“I call it progressive roots music.”

Some may see their experimentation as part of the ongoing alternative country phenomenon. Their new song “Missing My Baby Somehow” sounds very Wilco-like with its midsong crescendo, rising for nearly 30 seconds before crashing back down into the danceable melody. But if there’s a connection, Carter doesn’t see it. “I like the odd song that I hear from those bands, but they’re almost a little too aware of a genre rather than the song,” he says. “Rather than to prove something genre-wise, my goal is to always find that song.”

While purists may criticize the Rangers’ fusion, Carter is undeterred. “I love pure forms of music,” he says. “I can’t listen to bluegrass all night long, though, and I can’t listen to jazz all night long.” The Rangers have certainly found allies in diversity: their audience. “You’d see people with Mohawks standing in front of me, then the old blue-haired lady, all in the audience at the same time,” says Carter, remembering a show at the now-defunct Old Vic. “That’s one of the most successful things to do as a writer, which is not to create a private little club for one set of humans.”

With a growing fan base and recent talks with Sacramento’s Dig Records, there soon may be even more fans trying to find a fitting description. But it’s getting more difficult by the day. “It’s kind of a dark, loungy, sexy, more of a soul groovy thing,” Carter says of their upcoming album Let the Cards Pick the Winners. Sigh. OK music lovers, let’s try again.