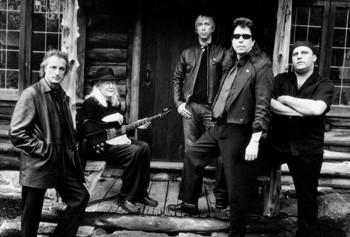 Bluesmen: The taciturn guitarist Johnny Winter brings his new band to the Mystic on April 4.

Johnny Winter lets his fingers do the talking

Johnny Winter doesn’t mind doing interviews. He just doesn’t say much. Calling from his current home in Connecticut, the veteran Texas blues guitarist is game but reserved, often giving answers that are shorter than the questions he is posed.

Asked about his upcoming 10-day, eight-show tour of California, which brings Winter and his road-tested four-man band to the Mystic Theatre April 4, Winter replies that his gigging schedule these days is “usually just on weekends.”

“I don’t know when the last time we played California was,” he adds in what, for him, represents a burst of loquaciousness. “I’m lookin’ forward to it.” (For the record, that last trip to the Left Coast was just in 2004, but confined to the southern part of the state.)

It’s all part of a musical career that reaches back as far as 1949, when Johnny, now 62, was just five years old. “My daddy taught me how to play the ukulele,” he recalls. “I played ukulele first, before my hands were big enough to play guitar.” His first guitar arrived when he was 12, a gift from his great-grandfather.

By the time that Johnny roared onto the national scene with his self-titled debut album in 1968, he was a seasoned player and bandleader, well versed in the blues stylings of Texas, Mississippi and Chicago. After seeing him perform, Rolling Stone reviewer Larry Sepulvado described Winter as “a hundred-and-thirty-pound cross-eyed albino with long fleecy hair, playing some of the gutsiest fluid blues guitar you have ever heard,” a rave that landed Johnny his first dates in New York. Soon he was on the bill at Woodstock, and was a full-fledged guitar star, rivaling Mike Bloomfield as America’s leading answer to Eric Clapton and the other British “blooze” players of that era.

His follow-up recording, Second Winter, cemented his reputation. Beyond the novelty of being a three-sided double LP, it straddled blues and rock, and introduced Johnny’s scorching version of Bob Dylan’s “Highway 61 Revisited,” the song he still uses to close his live shows. The 2004 CD reissue of Second Winter added a second disc with a previously unreleased live set recorded at the Royal Albert Hall in 1970.

Winter’s most recent recording, 2004’s I’m a Bluesman, was also released two years ago, and showcases his touring band (harmonica ace James Montgomery, second guitarist Paul Nelson, Scott Spray on bass and drummer Wayne June) working over an agreeable set of new tunes in which his concise solos accent the songs rather than dominating them.

Although he has penned dozens of his own numbers for the 20-plus albums in his catalogue, he generally sticks to standards and covers. “I don’t really write that much stuff,” he says. “I’m not a very good writer.” Several of the new songs, however, were contributed by band members after passing a simple test. “I just have to like it,” Winter says. “I just have to feel like it’s something I can do, that I can relate to.”

Always rail thin, and the survivor of an epic heroin habit, Winter has also weathered a pair of recent physical setbacks. By playing while seated, he was able to perform limited dates while recovering from a hip injury. That eventually mended, but then a more serious problem directly affected his playing. “I had carpal tunnel for a while,” he explains, “but everything is fine now. I had an operation on my hand last year.”

Winter continues to embody the title of his 1973 album, Still Alive and Well. “Most of the stuff I do is fairly old,” he says, which befits the lifelong bluesman. But don’t expect to hear “Rock ‘n’ Roll Hoochie Koo,” even though that was one of his signature songs back in the day. On this tour, Winter says firmly, “we’re not playing any rock and roll at all.”