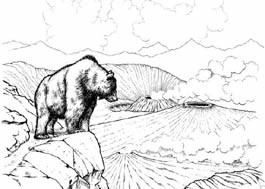 
Smoke Signals: Oh, come on. How would you illustrate this? By commissioning a photograph of the main interview subject? Yeah, well. Point taken.

Between 2.7 and 8 million years ago, while the Sierra Nevada burst up nearby and our early ancestors, the australopithecines, evolved in Africa, the valleys that define modern-day Napa and Sonoma had just formed. Going through a rebellious and pimply stage, they periodically gave way to powerful, volcanic fireworks and sprays of ash. The local landscape was fiery, explosive and mean; each volcano could vomit forth a square mile or two of hot ash and lava.

As the Miocene epoch gave way to the Pliocene, the valleys, primarily those in Napa, probably hosted upwards of 100 spewing volcanoes. As the volcanoes slowly became extinct, they left behind headstones of sorts, dotting the 300-square mile area stretching from Mount St. Helena to the San Francisco Bay and from the Santa Rosa Plain all the way across the Napa Valley with fields of tuff (ash) and igneous rock. From the Mayacamas to Sonoma Mountain to Mount St. Helena, these are now known as the Sonoma Volcanics, and are a major reason why Napa and Sonoma wines are so prized.

But what’s usually ignored is why they occurred in the first place. Napa and Sonoma valleys are both pull-apart basins that formed when the San Andreas Fault family, which originally started in Southern California, shook its way north about 10 million years ago. As tectonic plates under the area slid back and forth against each other, they also pulled away from each other in a special type of transform fault.

This movement opened the mountains up, creating the valleys, swaths of stretched earth crust, like thin-crust pizza, between them. The molten mantle from below rose up and out through the weak surface of the newly formed valleys, erupting through the formation of volcanoes. Faulting played a large part in laying the foundations of the local terroir, beginning with its parent role in the Sonoma Volcanics.

But what makes this volcanic field so important? Must be the wine.

Terry Wright, a ruddy-faced and gray-bearded geology and soil consultant and retired professor of structural geology at SSU, illustrates the great lengths vintners will go to in order to grow their grapes in the highly desirable Sonoma Volcanics. “Sometimes, there’s virtually no soil at all; you just drill a hole, plant a stick of dynamite, then plant a vine in there,” he says.

Volcanic soil is good for two things: mineral content and drainage ability. Wright waxes Sandburg-like for a moment. “Vines are like cats. They don’t like to get their feet wet.” In other words, too much water will bring too many nutrients to the grape vines, resulting in big berries with diluted flavors. Volcanic soil, however, hurries the water through, stressing the vines so that they’ll produce small berries that pack a concentrated punch.

At Darioush Winery, a hair’s-breadth away from the Stags’ Leap American viticultural area (AVA) in the southern Napa Valley, just as one steps out of the elevator leading into the underground barrel chai, there is an exposed wall of excavated volcanic material. The grape vines planted in this soil snake down through crevices in the rough, gray crags of the rock, eventually staking out their own water and nutrient sources up to 30 feet below ground.

The San Andreas Fault family, generally composed of strike-slip faults where two tectonic plates slide back and forth against one another, also operates as a compression fault in the North Bay, jamming plates together. When parts of the Sonoma Volcanics were uplifted, exposure to the elements eroded the material, spreading its grape-friendly texture and chemistry into sedimentary layers that form the slopes of Sonoma Mountain and top the east ridge of the Napa Valley. Faults are also responsible for slicing apart different kinds of rock and putting them back together in a new arrangement, making many terroirs possible in a small area.

“Without faulting and folding, we wouldn’t have the variety of grapes we do today. Faulting and folding were responsible for bringing volcanic soil and sedimentary soil to the surface, generally speaking,” says Wright. These earth activities have helped to produce a reputed 140 different soil types in the Napa Valley alone, while Sonoma County’s total number of soil types far surpasses that of France.

Faulting is also what initially created the topographical features that help dictate climate conditions, a large factor that growers consider when determining where to plant different grape varietals. “Without topography,” Wright says, “there would be all uniformly cool temperatures here, like it is as you go inland from Monterey, where they grow artichokes.”

The lowland of Carneros (on the Napa-Sonoma border) is an area that sunk down when the faults that border it slid apart. Carneros, which invites cool air from the San Francisco Bay to collect between its east and west ridges, maintains a temperature more suitable for the delicate Chardonnay and Pinot Noir grapes that the low-lying region is known for and that compose about 80 percent of its total wine grape crop. Sonoma Mountain, which stands on top of the still-active Rogers Creek Fault, hovers well above the fog level, allowing long sun exposure to the grapes growing there, hence Sonoma Mountain AVA’s specialty: Cabernet Sauvignon.

Wright cautions not to get too fired up about faults and terroir, however. It’s not that faults stand on shaky ground for him; rather, they’re not the entire reason behind Napa’s and Sonoma’s viticultural success. “Even if we hadn’t had the faulting and folding, we’d still have soil and Mediterranean climate,” he assures, “but we wouldn’t have the variety and intensity of grapes and wine.”