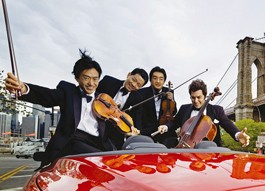 We sigh these words—”the economy”— in a descending tone that is tinged with despair, heavy on the resigned lips. They so much contain the answer to the questions about why things have changed that Gary McLaughlin is weary of bespeaking their disappointment. After five years of presenting free classical concerts, McLaughlin’s Russian River Chamber Music will begin charging admission this season. “No one needs to explain it,” he says resignedly. “Everybody knows why.”The economy. When it was good, it’s what allowed RRCM to offer free classical performances both traditional and cutting-edge. Those with nothing to do on a Saturday night, for example, could drive to Healdsburg, plop into a front-row seat at the Raven Theater, and witness a world-class performance by a New York string quartet experimenting with alternate bowing and tape loops, all for the price of gas and whatever could be spared for the donation jar. Those days may be over, but McLaughlin is certain that Russian River Chamber Music has ample fans who were originally attracted to the series for free and who can keep coming with a modest admission fee.

“We’re going back to the prices we charged five years ago,” McLaughlin notes. “Students are still half price, and $20 is as low or lower than anything in the county.”

This season’s international theme is underscored by the Shanghai Quartet, who open the season this weekend in Healdsburg. Featured in the Woody Allen film Melinda and Melinda, the group includes cellist Nicholas Tzavaras, whose family was the subject of the film Music of the Heart with Meryl Streep. Known for juxtaposing Eastern and Western sounds, the Shanghai Quartet are at home both with the Spanish composer Joaquin Turina, whose work is included in the upcoming program, and Beethoven, whose complete string quartets they’ve recorded for a November release on the Camerata label.Though Shanghai Quartet violinist Yi-Wen Jiang is an avid wine collector, McLaughlin stresses that his concerts aren’t for the “wine country weekender.” The economy is what it is, but he’s still dedicated to presenting serious classical music in a casual setting. “More quartets are performing in bars, in New York and elsewhere,” he says. “Playing with bikers standing around, in full leather, listening to Brahms. With tears in their eyes.”