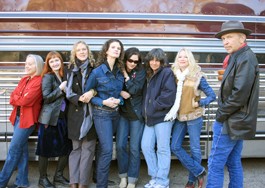 fAew months after his best friend and Guilty Men bandmate Chris Gaffney died in 2008, Dave Alvin was asked to play San Francisco’s Hardly Strictly Bluegrass festival. He couldn’t bring himself to make it a Guilty Men gig so soon after Gaffney’s death, so he recruited a few of his favorite female players: Cindy Cashdollar (steel/Dobro), Nina Gerber (electric guitar), Christy McWilson (vocals), Sarah Brown (bass), Lisa Pankratz (drums), and fiddlers/harmony vocalists Laurie Lewis and Amy Farris. Dave Alvin and the Guilty Women made their debut at that show. They hadn’t even rehearsed beforehand, but within weeks, they had recorded Dave Alvin and the Guilty Women, released in May. The last song on the album is “Que Sera Sera”—a tune Alvin has done as an encore for years, often with Gaffney at his side.

As he prepared to hit the road as the only guy in a band full of women, Alvin—whose musical history includes co-founding the seminal roots rock band the Blasters with his brother, Phil, followed by the cowpunk X offshoot the Knitters, in addition to a prolific solo career—sat down to briefly discuss the vagaries of fame. Bohemian: Could there have been a more perfect song to end the recent Gaffney tribute CD with than “The Guitars of My Dead Friends”? Dave Alvin: I wrestled with the thought of not putting that on and leaving [the album] Chris-free, but it was perfect. The song just summed it all up. In a way, it was Chris’ way of putting his passing into perspective. Boho: So, are the Guilty Women going to be around for a while?

DA: Well, we’ll see if they can stand me. This won’t be luxurious touring. But everybody in the band’s kind of a road dog. Boho: You’re going on what sounds like a great ‘Roots on the Rails’ trip with the Flatlanders this fall. DA: I’m pretty shy, so it’s not normally my idea of a great time. My idea of a great time is hiding. Boho: You never struck me as being a shy guy.

DA: It’s a little known fact. With the right amount of beer, I’m a different guy. I’ve met and worked with some famous people and sometimes it just goes easy and other times I can be a total gush head.Boho: But it’s different coming from a musician. You’re at least speaking the same language at a level above gushing fan. DA: Inside I don’t see myself as that. I’m still a goofball from Downey. I’ve gone out of my way not to meet people that I am a fan of. Literally, I’ve been across the room, which is kind of weird. Just instantly, whatever I’ve accomplished or done just disappears and I’m a 14-year-old kid again. To be honest, it’s that way with Cindy and a lot of the gals in the band. That’s why we all get along. I’m intimidated by them. There are moments onstage that are pretty stunning. Dave Alvin and the Guilty Women perform on Friday, Oct. 2, at the Mystic Theater. Eliza Gilkyson opens. 23 Petaluma Blvd. N., Petaluma. 8pm. $25. 707.765.2121.