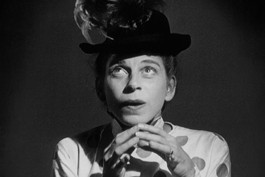 Doc of the Bay

Ask fans of the world’s best film festivals, and they will certainly tell you that a festival is only as good as its films. Star-studded receptions and galas, onstage celebrity appearances, major studio sneak-peaks and advance Oscar buzz are only the icing on the cake, and if the cake isn’t all that tasty, there’s no reason to come to the party. With appearances by Clive Owen, Uma Thurman and Woody Harrelson, a very star-studded opening-night gala and a closing-night party shipboard in the San Francisco Bay, this year’s Mill Valley Film Festival, produced by the California Film Institute and screening at its Christopher B. Smith Rafael Film Center as well as throughout Mill Valley, is one of the best.

Yet the quality of the films remains the definition of a festival’s importance, as evinced by the power of the story they tell, and there are plenty of film fans who have come to the conclusion that a story is even more powerful when it is real. This explains the growing number of documentaries which show up annually at the world’s best cinematic celebrations, including the MVFF, running Oct. 8&–18. This year, nearly one-quarter of the films on display are documentaries, many of them shining their artistically journalistic light on high-profile homo sapiens who’ve made their marks in and around the Bay Area. Of these, the loftiest name—and not the least because it has appeared on a zillion cartons of Ben & Jerry’s ice cream—belongs to Wavy Gravy. This year’s festival includes two screenings of Michelle Esrick’s much-anticipated (and cleverly titled) Saint Misbehavin’: The Wavy Gravy Movie (Oct. 9 at Sequoia; Oct. 13 at the Rafael), an affectionate and eye-opening look at the man who evolved from being Bob Dylan’s standup-comic roommate and the clown-clad master of ceremonies at Woodstock into his current station as spiritual goofball, fundraiser extraordinaire, Berkeley commune dweller and daily practitioner of practical compassion.

Described by Paul Krassner as “the illegitimate child of Harpo Marx and Mother Teresa,” Wavy Gravy is depicted in the film as the unlikeliest of role models, a street-smart activist who practices what he preaches, and preaches mainly by juggling balls, dropping bad puns and dressing like a clown. The film was seven years in the making, and includes interviews with members of the Grateful Dead, Bonnie Raitt, Jackson Browne, Ramblin’ Jack Elliott, Odetta, Patch Adams, Buffy Sainte-Marie and the residents of Wavy Gravy’s Hog Farm commune.While Gravy exemplifies a particular kind of everyday grace in action, Marin County’s Anna Halprin stands as a symbol of another incredibly potent form of grace. In Breath Made Visible (Oct. 10 at the Sequoia; Oct. 12 at the Rafael), Swiss filmmaker Ruedi Gerber explores the life and works of the legendary Mill Valley dancer-choreographer, blending together interviews and archival footage that at times is visually astounding: writhing dancers silhouetted on the Golden Gate bridge; a slow, single-file parade up the side of a mountain; dozens of brightly garbed senior citizens dancing in their rocking chairs. Halprin, now 89, is a co-pioneer of the experimental aesthetic approach known as postmodern dance, based on the view that all movement is dance, and that all humans are by their nature dancers. The film includes footage of Halprin rehearsing on her famously enormous backyard deck, designed to serve as a dance floor, and numerous interviews with those whom she has inspired over her long and boundary-bending career.

Another inspirational name in the Bay Area is that of an institution, not a single human being: the San Francisco Mime Troupe, the radical, outrageous, progressive theater troupe known for its tuneful, politically spot-on musical satires. In 1985, filmmakers Glenn Silber and Claudia Vianello produced a memorable documentary about the Mime Troupe. Titled Troupers (Oct. 16 at 142 Throckmorton), the film followed the group during one particularly powerful road trip with the pro-labor musical Steeltown.

To celebrate the Mime Troupe’s 50th anniversary this year, the MVFF has included a one-night-only screening of the 23-year-old film—with lots of added attractions. Troupers includes a panel discussion featuring former members Peter Coyote, Joan Holden, Wilma Bonet and others, plus a special musical-comedy concert featuring composer and lyricist Bruce Barthol, of the original Country Joe and the Fish.

Other notable local documentaries at this year’s festival include the 27-minute short Hidden Bounty of Marin: Farm Families in Transition (Oct.11 at the Sequoia; Oct. 13 at the Rafael) focused on the 200-plus family farms that stand at the forefront of an agricultural revolution, making pro-sustainability choices that could have a profound impact on the future of everyday food. The film runs with the movie Homegrown, about a small thriving farm in the gangland heart of urban Pasadena.

Though devoid of any overt Bay Area connections, Peter Rodger’s Oh My God (Oct. 17 at the Rafael; Oct. 18 at the Sequoia) looks as if it could be big. Rodger, disturbed by the hate-fueled rhetoric of prominent religious spokespersons, ventured into the world, camera in tow, asking all he encountered, “What is God?” The resulting three-year journey, covering 23 countries, brought Rodger into encounters with tribal Aborigines, Masai dancers, Tibetan monks and more, all eager to offer their answer to the Big Question. Zombie Girl: The Movie (Oct. 10 at 142 Throckmorton; Oct. 16 at the Rafael) by Aaron Marshall, Justin Johnson and Erik Mauck, follows another kind of quest, as 12-year-old would-be filmmaker Emily Hagins struggles to film her own feature-length zombie movie, an improbable task that, in this wildly inspiring documentary, ends up prompting the help of this charmingly blood-obsessed pre-teen’s family and friends, and ultimately the entire filmmaking community of Austin, Texas.

‘Shadow of a Doubt’