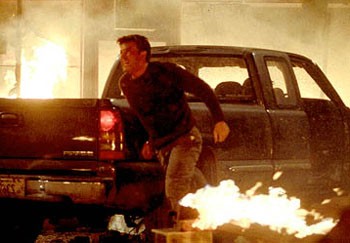 ‘The Sum of All Fears’

‘The Sum of All Fears’ goes boom, but it’s OK

It’s not easy to retrofit an expensive Tom Clancy property, especially when the great man himself is looking over your shoulder as executive producer. So one makes allowances for the scattered quality of Phil Alden Robinson’s thriller The Sum of All Fears. In this heavily rewritten version of the bestseller, a conspiracy to hatch World War III is halted by Jack Ryan (Ben Affleck), who, despite his days played by Harrison Ford in earlier Clancy vehicles (Patriot Games, Clear and Present Danger), is now just a minor clerk without wife or children–but with a seemingly casual girlfriend (Bridget Moynahan). The film has chunks of the novel’s slightly addled mix of East German scientists, weakling American politicians, and Saudi extremists, and it tries to scare us with the notion of an atom bomb in the hands of a Commu-Nazi conspiracy.

The trouble begins when a couple of Arab peasants stub their toes on a derelict nuke misplaced by the Israeli army. These simple, backward folk, thinking it’s a jardinière or something, peddle the weapon to real villains. The America-hating mastermind is a Vienna millionaire (Alan Bates, no relief) with a swastika engraved on the inside of his watch. (Sample rant: “They called Hitler crazy. He wasn’t crazy.”)

I can’t give the film the dignity it seeks (or, rather, that it borrows) from Morgan Freeman, who plays President James Cromwell’s main advisor. Freeman can perform this kind of thing in his sleep, as he may have here. As in Spy Game, Fears is loaded with hushed staff meetings in bunkers and plate-glass chambers, clerks peering at screens, urgent e-mails and teleconferences. To make matters worse, we’re tantalized with a few scenes of a field agent played by Liev Schreiber (Kate & Leopold, Pay It Forward), whose career is far more exciting than anything Ryan gets up to. You don’t get to follow Schreiber’s character, though–that would be too escapist, God forbid.

If the film displays any particular timeliness, it’s that it compliments the Bush consensus that such a bombing is inevitable and we might as well get used to it. The Sum of All Fears does go a step further than the average spy effort. The audience has been teased endlessly by the warhead that almost goes off in the Bond films. Here, the bluff is called, as you can see from the previews. The fireball puts a pall over the adventure, even though the film, using a holocaust for entertainment, makes the claim that an atomic bombing of Baltimore really wouldn’t be that big a deal. We see some burnt cars and an overburdened emergency room as Ryan tries to get to a telephone to forestall world war.

It’s not giving away the ending to say there’s no permanent damage; we overhear a conversation to the effect that the fallout blows out to sea (that’s a relief!), and we end on a solemn but upbeat note. This film, which begins dull, ends lunatic. The Sum of All Fears, which flaunts its realism, is crazier than the craziest James Bond movie.