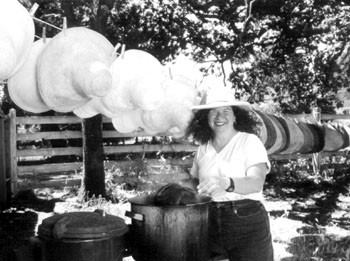 Crowning Glory: Amy Smith, shown here dying her hats, throws open her studio doors to the public for Sebastopol’s Art at the Source.

The source of Amy Smith’s art is a topper

Amy Smith is glad to have a visitor, even if it means cleaning up. She proudly points out that the brightly colored threads in her West County studio are spooled by hue, that her scraps of silk and velvet are tidied away in plastic boxes, her feathers are categorized, and that her large collection of blind, bulbous heads is arranged on new shelving.

The heads, rest assured, are wooden. Some are carved to cunning brims, others bear deep creases in the crown, a few could put the stove in Lincoln’s pipe, and one flirts up at the side, presumably to better allow a flapper’s neat bob to peek out beneath.

Smith practices the old-fashioned art of millinery, or hat making, creating artistic headwear in the airy brightness of her newly neat studio while classical music quietly plays, her ancient dog pants in a stream of sun, and the iron steams its clean, familiar scent.

Exhibiting her work as part of the Sebastopol Center for the Art’s eighth annual Art at the Source open studio tour, running June 1-2 and 8-9, Smith has good reason to straighten up.

According to Sebastopol Center for the Arts executive director Linda Galletta, an estimated 3,000 people took this self-styled tour of artist’s studios last year, resulting in more than $177,000 in total sales over one weekend for the 66 participating artists. This year, the event stretches to two weekends with some 91 souls willing to throw open their doors, pour some cheap wine into plastic cups, and invite hordes of complete strangers into their most private spaceÑwhere they create art. What’s more, once the strangers have arrived, sipped, and looked, they’re going to want to talk about it.

All of which is cheery fun for Smith, who, like most visual artists, works in complete isolation.

“I like having feedback and having visitors in my space,” she insists. “I’ve been trying to find a way not to work so alone.”

But working in a crowd, albeit an underage one, is what led Smith to millinery in the first place. As a young textile artist with two babies underfoot, she quickly realized that printing 100 yards of cloth at a time, hand-painting lingerie, or working with the wet mess of tie-dye was hard to do with curious toddlers threatening to upend the works. “I needed something I could do up here,” she says, patting the large padded worktable where she sits to block her hats. “It’s what wacky female artists did during the turn of the [19th] century. And,” she smiles, “you can finish a hat during naptime.”

A petite, smiling-eyed woman in her 40s, Smith grew up in a family of crafty women. Her mother had her own small hat-making business, and an entrepreneurial aunt had two retail stores devoted to handicrafts. “While my aunt would show my sisters or cousins how to make something, she’d just give me a pattern and hand me the wool,” Smith remembers. “I don’t even remember learning how to knit; it was just something I could always do. If I needed money in college, I’d crochet someone a bikini.”

Pulling a favorite mold down from her line of heads, Smith chats while she casually fashions a hat. Taking an undyed Panama from a bag, she pushes it firmly down upon the faceless mannequin. “I make vintage-style hats, so I use vintage molds,” she says as she squirts the brim quickly with water. “But I also make my hats larger. People seem to have bigger heads these days.”

The water settled into the leaf-frond weave of the Panama, Smith sprays the brim with such ordinary starch as would stiffen a shirtfront. Working quickly as she talks, she rolls the brim over in a small curl all the way around, pinning the roll deftly in place before it rebounds. “I don’t so much block a hat as sculpt it,” she explains, scrunching the crown with both hands so that three finger-made ridges appear. “I love the process of sculpting; it’s working with materials and moving them into shape. You have to get into a different mindset for finishing. Hand-sewing the edges, adding the ribbon . . . ,” she drifts off. Those are clearly chores. Making the entity that will grace a face is her pleasure.

And Smith is all for pleasure. Having previously created 700 to 800 hats a year, sitting, spritzing, starching, and sculpting as a one-woman sweat shop all alone in the studio, she’s now content to produce only 200 annually. “It’s been nice to introduce myself to my kids again,” she says. Retailing for between $75 and $250, Smith’s hats are favored by gosh-dang unnamed celebrities as well as local clients and are generally sold in art galleries, rather than clothing stores, across the country. Her own husband, however, has to wait. “Every time I finish his hat,” she smiles, “someone buys it.”

More seriously, Smith explains that her work is important to her because “those of us who baked ourselves in the sun are now being told that we need to cover up. I think we should do it in style.” She’s also developing a line of hats specifically for those who have lost their hair to the ravages of chemotherapy. “People want to stay looking beautiful.” She explains that she watches old movies for inspiration, considering indeed such soft, close-fitting beauty as the word “cloche” conveys.

Almost as many men as women purchase Smith’s work, so she has developed two steady lines, “Joe” and “Maria”Ñmore like old friends than headwear. “People come to me for that chic-but-casual look,” she says, modeling Joe, a handsome, straw, gardening-to-jazz-festival model. “Mine aren’t as crisp as store-bought hats, because I don’t lacquer them. They feel better that way and you’re not afraid to put them on.”

Taking Joe off, she turns again to the Panama. Gripping the brim edge tightly, she grimaces with effort and begins to crank the straw into a rosette. The rest of the hat pulls into shape, attaining a high haughty back and a dipped front, the finger-ridges of the crown deepening dramatically. Working swiftly, Smith pins the rosette into place and spritzes it with starch. “Everyone looks good in a hat,” she assures.

“This,” Smith chuckles as she cocks her head to admire her fast-drying work, “is the first time I’ve ever stuck with anything long enough for it to come back in style.”