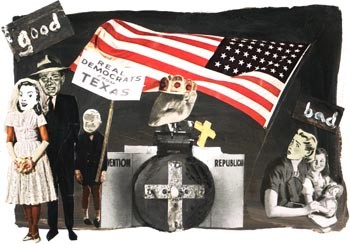 Why I’m resisting the New Morality

THE RHETORIC of this political season reveals some dubious assumptions that currently seem to prevail in American culture. The emphasis on “family and faith” (especially by the alpha Democrats) as the bedrock of all virtue and morality implies that secular and/or single persons are somehow morally inferior and socially suspect. Even married couples without children or religious affiliation–let alone unmarried couples–are likely, in the present climate, to be regarded as vaguely unsavory or at least far enough outside the imagined mainstream to deserve little or no acknowledgment as valued contributors to the commonwealth. And if you happen to be gay, forget it.

By declining to breed, you are obviously out of bounds; you may be tolerated in the big tent of happy-face cosmetic diversity that even the Republicans have fabricated, but when it comes to “family values,” yours are at best questionable.

Now, I don’t mind if Al Gore wants to ask himself what Jesus would do about the budget surplus or the strategic oil reserve, or whether he’d run for president. And if Joe Lieberman would like to declare every Saturday a national day of rest, I don’t consider that such a bad idea. And even if that big-league Bible-hugger George W. Bush believes he’s exercising Christ’s compassion as he signs off on one more Texas execution, that’s a moral riddle I leave to scholars of deeper Talmudic wisdom than mine.

But when these guys suggest that rational faithlessness and deliberate or circumstantial singleness are less than moral, or maybe un-American, that gets my goat.

How many scheming evangelists and pedophilic priests and adulterous rabbis have to be publicly busted before the virtue-mongers are forced to acknowledge that there’s no correlation between proclamations of righteousness and actual ethical or moral conduct? Didn’t Jesus himself expose the Pharisees as a bunch of pious hypocrites? And wasn’t Jesus single?

ONE LIKELY source of this new moralism is a backlash against the perceived excesses of the 1960s–the pot-smoking, draft-dodging, sexually promiscuous self-indulgers personified by our lame-duck scapegoat president. Never mind that the greatest obscenity of that era was an insane war that some people had the good sense to resist.

“The sixties” are still being bashed by those too old or young to have been tormented by that decade’s terrible contradictions and by those who used the turmoil of the times as a smokescreen for their own irresponsible experiments and who now, unable to govern their own children, are desperately reaching for some controlling moral authority.

Religious institutions, with their “thou shalt nots,” are an appealing refuge from the dizzying changes currently wracking the planet. Some folks who sought spirituality in drugs or exotic cults or Eastern religions or the Internet are returning with relief to their Judeo-Christian roots

But one philosophical movement that gained currency in the 1960s and remains, for me, a wellspring of ethical and moral inspiration–with or without God–is existentialism. Without reducing this various and complex body of thought to some simple formula for living, I would say that one of its core principles is that of personal choice and responsibility. If God’s existence is in question and, as Dostoyevsky noted with anguish, “everything is permitted,” the burden of moral conduct is on the individual rather than the rules of some higher authority.

It is up to each of us to live in accord with our conscience and in conscious consideration of those around us.

This assumption of the power to shape our lives without the benefit of institutional guidelines is, in my experience, both humbling and exhilarating. The freedom to become what we are and do as we will, without the comforting fiction of a Supreme Being, affords us, as humans, a certain modest dignity. It is this existential dignity that I invoke against those who claim that morals are impossible without religion. Any thinking adult should be able to respect the integrity of those who consciously choose to live without false faith.

Better to remain honestly apart from hollow ritual than mindlessly go through the motions.

AS FOR THE FAMILY and its apotheosis as the model of wholesome citizenship, sure, it’s hard to raise kids and to support, both materially and emotionally, such a volatile and complicated biosocial unit. But it’s also hard to live alone in a culture that promotes marriage and children as the natural goal of anyone who wants to be considered normal. If contemporary memoirs are to be believed, the average family is steeped in destructive psychodrama and hardly the paradigm for a harmonious social order.

The joys of family life, like the joys of independence, are mixed with its agonies. The Democratic presidential ticket appears to take for granted the support of a majority of single voters, so it’s strategically understandable for Gore and Lieberman to court the “family” vote.

But a lot of single people are struggling, too, and at a time when half of all marriages end badly, it seems a bit myopic to ignore the legions of the unmarried. Certainly being a husband or wife or parent, while imposing an array of serious obligations, has historically failed to force people into virtuousness.

And there are enough lousy parents out there to raise the troubling question of whether some couples are morally fit to procreate.

Maybe once the election is over we’ll be spared the bully-pulpiteering of the self-righteous. One redeeming aspect of Bill Clinton’s moral lapses has been to disqualify him from copping a holier-than-thou attitude. He’s a flawed person, like the rest of us, and everyone knows it, so instead of pretending to have a hotline to heaven he has proceeded, for better or worse, to attend to business in the earthly realm. His public humiliation in the Lewinsky fiasco–not to mention his continuing legal problems–has had the ironic effect of making him far more likable than the sanctimonious obsessives who tried in vain to evict him from the presidency.

One lesson, or “moral,” of the impeachment spectacle was that most of this country’s citizens don’t look to the nation’s chief executive as a role model. Even Martin Luther King Jr., that icon of righteousness, was famously unfaithful to his wife. Does this diminish him as a heroic figure, a man of honor, and a fighter for justice?

Not as far as history is concerned.

In the secular Jewish tradition that I come from, doubt is no obstacle to goodness. One’s deeds in working for a better world, one’s contribution to the community, one’s ethical conduct in dealing with other people, are infinitely more valuable than self-serving declarations of faith.

In matters of religion, as of politics, I choose to cultivate a scrupulous skepticism.