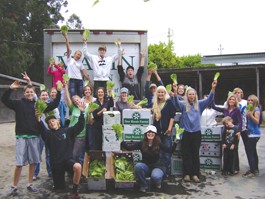 It all started seven years ago with 200 slightly imperfect zucchinis.

Helge Hellberg had just taken up his position as the executive director of the nonprofit Marin Organic, and in an effort to better know the community he represented, he set out to tour the farms of Marin. As he stood in one of the fields of Peter Martinelli’s Fresh Run Farms in Bolinas, Hellberg noticed a slew of gorgeous “photo-contest-sized” zucchinis clipped off the vine. He asked Martinelli why this was. The farmer explained that they’d grown too fast and were already too large to meet the market’s strict aesthetic requirements, so they were clipped to conserve the soil’s valuable nutrients.

“Peter said that an eight-inch zucchini about the thickness of two thumbs is called a ‘super fancy,'” recalls Hellberg. “Everything beyond that is called a ‘fancy’—and in today’s marketplace, no one will buy a fancy.”

As a result, beautiful healthy organic fruits and vegetables are regularly plowed back into the soil simply because they are too large, too small, a bit crooked or slightly discolored. In fact, a whopping 20 percent of all produce grown for human consumption in the United States never leaves the field. “I just thought that was crazy,” says Hellberg. “All that energy and care, the water and nutrients that go into cultivating those crops, and they’re plowed under?” So with Martinelli’s permission, Marin Organic carted off those orphaned zucchinis and donated them to a local community center—and the seed for the Organic School Lunch and Gleaning Program was planted.

In the program’s first year, the goal was to glean enough organic produce to supply three local public schools. To date, under the oversight of Marin Organic’s Scott Davidson, the nonprofit has collected over 150,000 pounds of local vegetables, eggs and dairy products and donated it to over half the schools in Marin, and is now gleaning enough to feed 10,000 of the county’s 30,000 students a week. “If 30 percent of surplus produce was collected,” says Hellberg, “we could feed Marin’s entire student population.”

The numbers are persuasive, and last year, the Marin Organic team spread their gospel countrywide by founding the first National Gleaning Day; 15 other states joined their cause on Sept. 20, 2010, to glean for local schools.

Gleaning, the act of collecting the leftovers from harvested crops, is an age-old practice dating back to Biblical times. In the Book of Leviticus, God instructs Moses to leave the corners of the fields untouched after the land is reaped: “thou shalt leave them unto the poor, and to the stranger.” Today, the tradition remains alive through a growing number of nonprofits around the country partnering with farmers, retailers and private garden owners to collect and donate unused food to those in need.

Chester Densmore, who drives the Marin Organic delivery truck, says he’s privileged to have his job—”I feel like the school-lunch Robin Hood.” The personal gratification is a great motivation, but Marin Organic also champions the importance of financial viability. In addition to supplying organic products gratis, the organization facilitates direct sales between participating farmers and schools to supplement what’s donated, which puts money in the growers’ pockets and gives the schools more bang for their buck. “Everybody benefits,” explains Adrienne Baumann, who replaced Hellberg at the helm as Marin Organic’s executive director this past April.

One of the first to recognize the value in such a program was the Novato Unified School District’s food and nutritional services director Miguel Villarreal. “It was the perfect opportunity to help educate our community about the value of buying and eating local organic food,” says Villarreal, who’s held his position since 2002. At the height of the agricultural season in August and September,

Previous ArticleEvolution of Karaoke Over the Years

Next ArticleAcross the Bridge: June 15-22