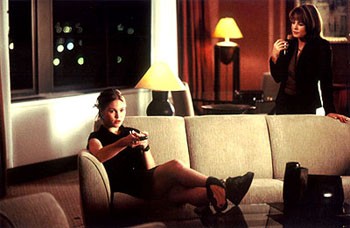 ‘The Business of Strangers’

Channing shines in ‘The Business of Strangers’

The plot of Patrick Stettner’s debut film, The Business of Strangers, sounds brutal in the Neil LaBute mode. At the film festivals, the film was frequently compared to LaBute’s dire In the Company of Men.

Note, though, the opening shot under the titles: the tall median grasses lining an airport runway, combed by the exhaust of a descending jet. That soft brushing of the grass is one sign of offbeat sensuality to come, as is the way photographer Ted Maniaci gets a cold thrill out of the alien cleanliness of hotels and airports.

The Business of Strangers begins at this Edward Hopper International Airport, with executive Julie Styron (Stockard Channing) hitting the ground running. We don’t know what business Julie’s in, but it’s clear Stettner knows the drill. His workplace lingo isn’t overwritten or overprofane; Stettner is not just another Mamet’s boy.

Some skullduggery is going on at the home office, which Julie is monitoring desperately via cell phone. Against this distraction, her business presentation is screwed up by the late arrival of a visual-aids helper named Paula (Julia Stiles). The older woman fires her tardy assistant on the spot.

By chance, Julie encounters Paula later at the airport hotel. By then, the executive Julie has received some good news, and so she decides to be nice and buy Paula a drink.

And after we get to know Paula, we can see she’s an ambisexual, hard-partying girl who fancies herself a writer. She’s as arrogant as a racehorse, but good at telling people what they want to hear–a female version of Patricia Highsmith’s amoral Ripley. The drinking continues into the night, ending in a seductive tug of war between the two.

Channing’s Julie is bottled-up to the point of androgyny. Stettner teases us, in a civilized fashion, with what exactly the older woman’s love life is like. Soon the two women come together in choosing a target: a full-of-himself headhunter named Nick (Frederick Weller) with a derisive smile and porn-star sideburns.

If what happens later among the three of them seems improbable at times, blame the miscasting of Stiles. Yes, Stiles’ disdainful face has the sexy sourness of the actress that critic Manny Farber used to refer to as “Jeanne Morose.”

But unlike Jeanne Moreau, Stiles doesn’t yield in playing her character: You can’t get under Paula’s tattooed skin, because there wouldn’t be room in there for anyone else. (As a rule in the movies, any character with a tarantula tattoo is probably not going to turn out to be a misunderstood, vulnerable soul.) Because Channing isn’t matched by someone of her own caliber, The Business of Strangers isn’t a complete success.

It’s Stettner’s barbed, sparse dialogue–and Channing’s inflections of it–that make The Business of Strangers gripping. Thanks to Channing, we don’t see a bitch; we see what her character would want us to see: an unself-pitying business professional, working twice as hard because she’s aging and because she’s a woman.

While I’m not likening the looks of a handsome actress to a homely actor, Channing seems like Edward G. Robinson at his best: all tension and muscular power, which frays, in quiet moments, into neurotic frailty.