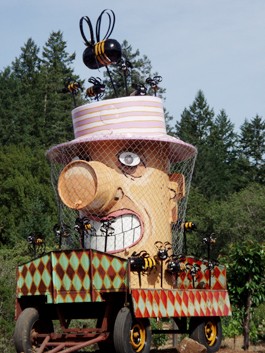 It’s no secret that bees are disappearing at a startling rate. What is a secret, though, is where exactly they’ve gone. Best-case scenario? They’ve all relocated to the Melissa Garden, a 40-acre refuge for our striped and fuzzy pollinator friends tucked into the edge of the Russian River Valley in Healdsburg.

A sign that reads “Bee Crossing” welcomes visitors to the property, and the dusty road crunches underfoot amid a quiet buzzing. A fountain trickles away in the center of an explosion of color—purples, yellows and reds all clamor for the eye’s attention—and sunflowers of all shapes reach toward the early morning sun. When Barbara Schlumberger, the driving force behind the gardens, appears in a woven sun hat and a big smile, it’s easy to understand why the bees seem to love it here.

Not only do the central botanical gardens evoke a natural and protective environment for the bees, educational tours and classes are offered for any aspiring beekeeper: plants to plant, hive management, the benefits of bee products and ways to spread the buzz on sustaining the bee community at large.

After meeting at a biodynamic beekeeping workshop in 2006, Schlumberger, Priscilla Coe and Michael Thiele began to weave ideas together for a sanctuary that would allow them to take care of their bees in the most natural and green way possible.

“We decided that we needed to make a bee sanctuary that would be a paragon, so that people around the world could see that they could do it themselves,” says Schlumberger, who lives on the Melissa Garden property with her vintner husband, Jacques.

“Sort of like a bee hospital,” she adds with a laugh. She bends to replace a cover on one of the hives, which are hand-painted by Schlumberger and look like something out of an art gallery, almost hidden among the hues of the flowers.

The farmers took a cue from the gods in naming the gardens—”Melissa,” the Greek word for honeybee, is said to have been a nymph who fed Zeus honey as a child—and are now taking bee survival into their own hands.

“Last year, we lost a third of the bees in the United States. It’s pretty amazing when you think about the consequences of that,” she says. “We’ve been using the bees as our slaves for years, and they’re dying now, their immune systems are down. It’s just a total collapse.”

Schlumberger attributes a large part of the bee disappearance to the use of pesticides and fatigue. Collectively, she says, the bees have around 80 to 90 diseases running rampant in their tiny systems.

The bees currently residing at the Melissa Garden—about 60,000 per hive in peak season, with a total of six hives on the property—take no notice of onlookers, being as busy, well, as bees as they crawl in and out of the hives carrying pollen on their back legs.

This bee oasis has big dreams. In the works since 2007, the grounds currently include an iconic garden, orchard and bee yard, an herb garden and a pond, not to mention the surrounding forest full of native vegetation; a medicinal garden is slated for installation in late 2008. Each element of the landscape is planned using biodynamic gardening methods, providing the most organic and sustainable setting for humans and insects alike.

“One of the most important things is how we prepare the garden,” Schlumberger says. “We add minerals and medicinal herbs to cow manure, and we do different sprays. The main idea is that the invisible world is taken into consideration as well. The moon, the sun, all of the natural elements are incorporated.”

One of the many unique benefits of the Melissa Garden is its dedication to holistic beekeeping, a practice that originated in Germany.

“Holistic beekeeping is looking to the bees to see what they need, instead of what humans need,” Schlumberger explains. “We give them large hives that are sized in a very natural way, instead of in traditional boxes, and we let them make their own comb, instead of putting in sheets of plastic. “And we don’t take all of their honey, if any at all,” she says.

The beekeepers also place an emphasis on only planting botanicals that bees are known to love, not simply like. Each plant is selected based on its nectar and pollen quality, as well as its ability to nourish the bees’ needs. The current list of “core plants” stands at about 113 or more different species of plant life, both annual and perennial, and new varieties are constantly being added depending on the season.

Happy bees and honey aside, these gardens are downright heavenly.