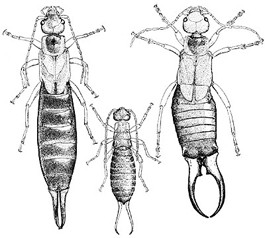 Bugs that gardeners love to hate

From a certain global, neo-Zen perspective, no bugs are really bad; they merely have interests that are counter to our own.

According to Donna Diehl, a trained master gardener, bugs and insects inspire many of the questions and concerns she confronts while on duty. On the website for the Sonoma County Master Gardeners, a program of the agriculture and natural resources department of the University of California at Davis, there is a list of the “Top Ten Most Wanted Pests,” a veritable who’s who of miniature garden terrorists. Diehl, who makes it clear she is no pest expert, but who does have access to a large library of useful information, spent some time recently describing all 10 of these irritating organisms, in reverse order of nastiness, with the help of a few of her favorite textbooks.

10. Apple Coddling Moth “Here in West County, where apples used to be the No. 1 crop, the apple coddling moth is especially problematic,” Diehl says to the sound of quickly flipping pages. She explains that the moth’s method of attack is to breed larvae, which then penetrate the fruit and work their way to the cores of apples, pears, walnuts and plums. “The apple coddling moth,” she adds, “is a very common pest.”

9. Cucumber Beetle “The Western spotted cucumber beetle,” Diehl says, “is a very common pest. It looks much like a ladybug—and ladybugs are my favorites—but the cucumber beetle is green, so it’s a case of red versus green, with red being the good guys and green being the bad guys.” The cucumber beetle, the reference book says, primarily attacks squash, watermelon and pumpkins, and reproduces very quickly. “Their secret weapon,” she says, “is that they make so many of themselves that they are difficult to eradicate.”

8. Stink Bug Shaped like a shield, as if it were wearing a large triangle on its back, the stink bug gets its name from the offensive smell it emits when disturbed. Though it is destructive to tomatoes and all fruits with pits, it also eats smaller bugs, which makes it not entirely bad. “Most of the guys who eat insects,” says Diehl, “are good guys, so they are a mixed blessing. They leave blemishes from the little bites they make on the fruit, and they also leave little brown drops of excrement. So they are sort of disgusting, but not all that destructive. It would take a huge swarm of these to do a lot of damage. They actually annoy the fruit rather than kill it.”

7. Spider Mite Named for the fact it has eight legs and spins webs, the spider mite eats almost anything, and multiplies rapidly. “You don’t find just one spider mite,” Diehl says. “You find hundreds of thousands of them.”

6. Olive Fruit Fly “There are many kinds of fruit flies,” Diehl says, succinctly. “These ones like olives.”

5. Argentine Ant “The most common ant we have here is the Argentine ant,” Diehl explains, pointing out that the primary problem with ants is not what they do to fruits and vegetables, but that they raise aphids (“They milk them,” she says), and aphids are bad for plants.

4 & 3. Snails and Slugs Snails are problematic for reasons most people might not expect. “Snails like to live in ivy,” Diehl says. “And rats like to eat snails, so ivy is often full of rats.” Slugs, she says, especially the little brown garden slugs, are a problem because you can’t see them as easily as snails. “Snails leave a slime trail that is clear evidence of their presence,” she says, “but slugs leave no visible traces, beyond the damage they do to your garden.”

2. Aphids “Aphids also multiply really quickly,” Diehl explains. “You might see one little patch on a leaf this morning, and by tomorrow it’s covered. They suck out the plant’s fluid. They’re like vampires.”

1. Earwigs “Oh, yuck,” Diehl laughs. “Nasty little critters. Earwigs have a real hold here. They can reduce a marigold to nothing but a stem in no time. These are my least favorite because they are so hard to kill. You can step on them, and they just crawl away. To kill an earwig, you have to step on them—and then twist your foot. It’s a little dance we do.”

To learn more about the master gardener program and other pests, go to http://groups.ucanr.org/sonomamg.