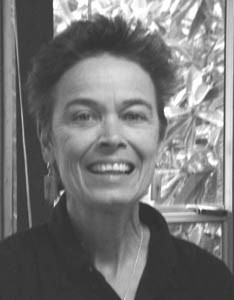 Tanya Brannan honored for her work

When you ask Tanya Brannan, head of grass-roots, in-your-face women’s rights group the Purple Berets, about the controversy she’s endured as an activist, she just laughs.

“Well, when you go up against some of the most powerful people in Sonoma County, people want to silence you,” she says. “And the easiest way for them to do that is to undermine you. We don’t have a budget, so there’s no money they can take from us. So they launch a campaign of discrediting.”

“I can’t tell you how many times I’ve been called a liar.”

Brannan can afford to smile, having spearheaded the first-ever successful lawsuit against a police department for not protecting a woman against domestic violence. For that and her other work as a women’s rights activist, the ACLU of Sonoma County will be presenting Brannan with the Jack Green Civil Liberties Award on Feb. 6 at its annual dinner.

“Tanya is not only there pushing women’s rights in the political arena, but she’s also there for Sonoma County women, ready to answer that 11th-hour phone call from a woman in distress,” says ACLU activist Judith Volkart. “She’s done so much for women’s rights, and she does it in the face of controversy.”

Brannan, who grew up in Florida, notes that growing up in the South gave her a “wide-eyed look” at racial and sexual injustices firsthand and partly inspired her activism, as did the political atmosphere surrounding the Vietnam War.

But perhaps the most profound effect on her activism came from the four years she lived in Central America. During that time, she saw how important women are as the workers and childbearers but also how little power they have over their environment.

“Women are essential to a society, yet they have so little control,” she says. “But nobody is going to change that but the women.”

Brannan formed the Purple Berets in 1991 with three other activists who are no longer with the group. Angeredby the Clarence Thomas case, they knew they wanted to start a group acting for women’s rights.

Soon they were drawn to the criminal justice system. In 1992 only 11 of the 181 forcible rapes reported in Sonoma County ended in rape convictions, and out of 1,998 domestic violence calls, only 30 cases were charged as felonies. After seeing domestic violence and sexual assault cases being repeatedly dropped without investigation, it became clear to Brannan that the legal system was failing women.

“At first we thought it was a bad cop or lazy prosecutor, but after a while, we realized it was a systemic problem,” she says. “There’s just an utter lack of legal protection for women.”

The Purple Berets have helped hundreds of low-income women get their cases successfully prosecuted by the criminal justice system. But perhaps the biggest success for the Purple Berets so far was the case of Maria Theresa Macias, a Hispanic woman who was murdered in 1996 by her husband Avelino in Sonoma. Though Macias repeatedly tried to get the Sonoma County Sheriff’s Department to protect her against her husband, Avelino finally killed Macias and then shot himself.

“If the police had showed they were sorry for Macias, there never would have been a lawsuit,” says Brannan. “But they lied repeatedly and said they were comfortable with how they handled the case. When we saw we weren’t going to get justice from the system, we encouraged Theresa’s mother to sue.”

Last summer, Sonoma County was ordered to pay Macias’ survivors $15 million, the second largest legal settlement ever paid by the county. More importantly, it set a national precedence that showed that women now have the right to hold law enforcement accountable for not enforcing domestic violence laws.

Since the Macias case, the police department has created several new programs and policies for domestic violence.

After 12 years heading the Purple Berets, Brannan can vouch for the success of grass-roots activism.

“People think that activism doesn’t work and when the government does something, it’s a done deal and there’s nothing they can do about it,” she says. “But our group proves that’s not true. A small group of people can make a huge difference. You have to be smart and tenacious, but you can win.”

The ACLU of Sonoma County annual dinner will be held Thursday, Feb. 6, at Santa Rosa Veterans Memorial Auditorium at 5:30pm.