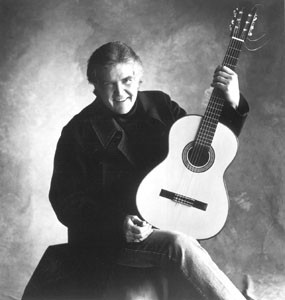 Buy ‘The Essential Guy Clark,’ which contains both the ‘Old No. 1’ and ‘Texas Cookin’ ‘ albums.

“Growing up in West Texas, the first thing you get is a pocket knife and a whetstone,” says singer and songwriter Guy Clark in a soft, Southern drawl, sipping a morning cup of coffee during a phone interview as he explains his interest in guitar building. “All you need is the end of a fruit box, and you can make all your own toys.”

“During high school,” he adds, recalling his stint as a carpenter’s helper in the sweltering Gulf Coast town of Rockport, Texas, “I had a summer job at a shipyard, building the last big wooden shrimp boats that were made before they switched over to steel. Those guys were master craftsmen and carpenters. Just to watch them work was a life-changing experience–seeing the finesse and the way they went about it. Their attitude was ‘faster is not better.’ I try to take that same approach with my songs, with quality taking precedence over quantity.”

Sure enough, Clark–who has been hailed as everything from “the common man’s poet laureate” to “the 13th Apostle”–has recorded just a dozen albums in the past 28 years. His songs are front-porch simple, often tinged with sadness and resignation and just a hint of hope.

“He remains the kind of songwriter,” the All Music Guide notes, “whom young artists study and seasoned writers (and listeners) admire.”

While Clark isn’t exactly a household name, his songs–including “The Last Gunfighter Ballad,” “Desperados Waiting for a Train,” “Heartbroke,” and “Oklahoma Borderline”–have scored hits for such country luminaries as Ricky Skaggs, the Highwaymen, Vince Gill, and Rodney Crowell. Progressive country singers and songwriters like Crowell, Lovett, and Nanci Griffith often cite Clark as a major influence.

Few in the country genre have the same knack for storytelling as Clark, whose folksy vignettes and character studies often resonate with a gritty realism reminiscent of the novels of John Steinbeck. “A lot of my songs are based on real people, although there’s a certain amount of dramatic and poetic license, which I assume I’m entitled to take,” he explains with a laugh.

In the past, those songs often spoke longingly of broken lives and unfulfilled dreams. For instance, “Let Him Roll,” from his classic 1975 debut Old No. 1 (Sugar Hill), tells the story of a flophouse elevator operator and dying wino who’s been jilted by a Dallas whore. It was inspired by a salty merchant seaman named Sinbad whom Clark and fellow Texan Townes Van Zandt had once met in a Houston bar.

His most recent album, The Dark (Sugar Hill), is filled with sparsely produced, simple ruminations on a world-weary homeless veteran, the death of a beloved dog, and growing old gracefully. The lone cover song is “Rex’s Blues” by the late Van Zandt.

“I love his songs,” Clark offers. “I’ve always sung them, and I probably always will.”

The reflective nature and recurrent themes on The Dark–loss, love, and friendship–and the fact that the album was released on the first anniversary of the 9-11 terrorist attacks, has led some critics to assume that it’s a concept album inspired by the events of 9-11.

“The title song is a little deceptive because it actually is a positive, upbeat song,” he says. “It’s about all the stuff you can see in the dark but never realize. Certainly there was no intent on my part to write a concept album. My approach to making albums is to get 12 good songs and record them. And the common denominator is me. My taste in songs is the thread.”

And his West Texas roots are close at hand. The source of that inspiration is the vast West Texas prairie, a spiritual touchstone where Clark visits families and friends and “savors the real barbecue” sold in local rib joints.

“Being a songwriter, there’s a certain independent stance you have to take–you’re not copying other people’s songs, you’re trying to create something of your own,” Clark says. “That’s the kind of thing you’re raised with in West Texas, or any other part of Texas–that you can do anything you put your mind to. After all, we’re just two or three generations away from being an independent nation in the Lone Star State. You’re imbued with that spirit growing up, and I think it spills over into songwriting as well as a lot of other fields of endeavor.