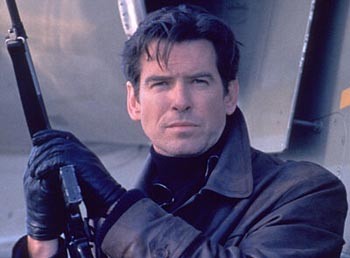 I GUESS IT’S OBVIOUS that this is the Wizard of Oz room,” says Jeff Rubin, an articulate, soft-spoken man in his early 30s, waving his arm toward one wall of his spacious, memorabilia-packed, two-bedroom Marin County apartment. A museum’s worth of authentic posters and old framed photos hangs in an immaculate display, including autographed pictures of all Oz‘s stars, except for Judy Garland. “I’ll finally get my signed photo of Judy next month,” he beams. “I’ve been making payments on it for months.”

“Now let me show you the Bond room.” Just around the corner, a jarring transition occurs, as the fairy-tale whimsy of Oz gives way to the giddy machismo of Ian Fleming’s notoriously womanizing superspy. “James Bond has been featured in 18 movies, not counting spoofs like Casino Royale,” Rubin explains, as he points out each of the vast number of artifacts–pictures, posters, and models–that inhabit his self-created monument to the myth of Agent 007. “I’ve got original posters of all but the first two films. And these,” says Rubin, who is employed as a worker’s comp claims adjuster, “are my prize possessions.”

All in a row are three movie posters: The Spy Who Loved Me with Roger Moore as Bond, On Her Majesty’s Secret Service with George Lazenby, and Diamonds Are Forever, featuring everyone’s favorite Bond–Sean Connery. Each framed poster is signed by its respective star. Each bears the inscription “To Jeff.”

“I had to wait six hours in the cold to get Sean’s autograph,” Rubin recalls. “He was in San Francisco filming The Presidio, so I hauled the poster down there and just waited. People say, ‘Oh, why’d you get it personalized? Now it’s not worth as much.’ But I’m never going to sell these. It may be devalued for a collector, but, you know, it’s more special to me.”

The Connery poster, I observe, is prominently placed, shrinelike, over the room’s only bed. “Bold of you to place an image of James Bond above the bed,” I remark, “he being an ultimate symbol of virile masculinity and all.”

“I agree,” Rubin bobs his head amiably. “That’s why the other room is my bedroom.”

Back out in the living room–in a state of mild disarray following a party the previous night to celebrate the opening of the latest Bond film, Tomorrow Never Dies, with Pierce Brosnan making his second saunter through the role–Rubin shows off a display case crammed with even more items: a Bond action figure; a model of the secret agent’s famous Aston Martin miracle car; more Wizard of Oz stuff.

(Of the odd disparity between his two filmic obsessions, Rubin only shrugs. “I like both of ’em,” he sensibly explains. “I don’t think it means anything.”)

He takes a seat on the couch.

“I thought the new movie was a lot like the 1960s Bond movies,” he says. “I think it was really geared to James Bond fans. The supervillain–Jonathan Pryce–was properly insane. And Brosnan is more like Connery than any of the others. He even makes his little quips out of one side of his mouth, like Sean, where Roger Moore would just stand there and enunciate so everyone could hear exactly what he was saying. But the overall feeling I had was, ‘Wow! Bond is back!’ “

Rubin does not mean to suggest that the new film is perfect. Like most Bond fans, he holds some pretty strong opinions about how Bond is handled in these movies.

“I think Brosnan needs to fill out a little,” Rubin says, referring to the lanky British actor’s build. “And I think the k.d. lang song that played at the end should have played over the opening instead of that Sheryl Crow song.”

He even displays a mild touch of indignation about the audience with which he saw the film. “There was that end credit, in memory of [long-time Bond producer] Cubby Broccoli. I don’t think that many people picked up on it,” he says, shaking his head. “People didn’t really clap, yet he could have dissolved the series back in the late ’70s. He even hand-picked Pierce Brosnan, as the last act before he died. He deserved a little more respect than he got from that audience. I shouldn’t be so sensitive about it,” he adds. “It’s not like the theater was packed with film history majors or anything.”

He plugs in a video of Dr. No, the first Bond film, to illustrate a point about the evolution of the series’ distinctive credit sequences, with all but No featuring scantily clad women dancing in silhouette as the theme song plays.

“The new film still features the dancing women in the credits,” Rubin says, “but it’s gotten a lot artsier. The whole series is slowly making its way into the 1990s. Back in the ’60s, during the Cold War, he represented the good boys, everything that was good about NATO, the promise of someday crushing the Evil Empire. We don’t have that threat anymore, so now he’s just perceived as the cool spy guy. He still ‘gets the girl’ and stuff like that, but he also gets slapped by the occasional woman.”

Rubin admits that, as a boy, he saw Bond as a role model. He even had a special secret-agent pocket telescope he carried everywhere.

“Oh yeah, I wanted to be James Bond,” he laughs.

“But will he be a suitable role model for young men of the 21st century?” I wonder.

“From one standpoint, no,” Rubin replies. “I mean, he’s still a womanizer who apparently doesn’t practice safe sex. But there’s the fact that he really believes in what he’s doing. He believes in protecting those who are close to him. He sticks to his principles, and he puts his own life on the line for those principles. I don’t know about you, but I think that’s a pretty good message.”