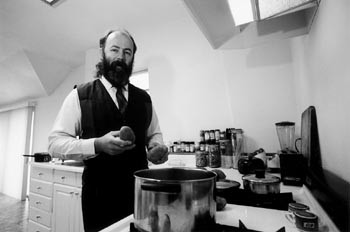 Chieftain of the Pudding

AUTHENTIC SCOTTISH cuisine has much in common with Scottish athletic games: They both seem to have risen from an intense and heightened level of reckless bravado. Scottish dress, too–the wearing of loin-flaunting kilts with animal heads dangling from the belt–seems born of the same good-natured, swaggering, I-dare-you mindset that led our burly Scot ancestors to start flinging 100-pound poles through the air and call it a sport, or to boil a sheep’s stomach stuffed with leftovers and serve it up as food.

Robert Burns–the beloved, 18th-century national poet of Scotland, whose vernacular poems sang the praises of every aspect of Scottish life and land–wrote numerous odes to the brazenness of his homeland’s cuisine.

The most famous of these is the brash “To a Haggis,” a giddy delight that praises that most famous of Scottish dishes–traditionally a puddingesque assemblage of “pluck” (various sheep organs), oatmeal, and savory spices cooked inside a sheep’s belly–with words so lofty and appreciative as to raise the much-misunderstood haggis to the level of myth.

The haggis, in fact, is reportedly named after a mythical Highland beast with two long legs and two short legs, and has become so enmeshed in Burns’ own legend that it is the centerpiece of the annual Scottish bashes known as Burns Night suppers, held on or around the bonnie bard’s birthday on Jan. 25 (he was born in 1759 and lived just 37 years).

Wherever Burns Night is observed, the steaming haggis is always served with a ceremonial splendor, carried triumphantly to the table as a bagpiper plays a rousing tune and the cook follows behind, wielding a pair of whiskey bottles crossed before him like swords. The platter is placed before the host or guest of honor who, turning to face the haggis itself, grandly recites Burns’ famous poem that begins, “Fair fa’ your honest sonsie face/ great chieftain of the puddin’ race!/ Weel are ye wordy of a grace/ as lang’s my arm.”

“Then he pulls a knife from somewhere and slashes open the haggis,” explains author and historian Steven Blamires, himself a Scot now residing in Sebastopol, “as a huge cloud of steam billows up from the table and everyone cheers. It’s a pretty good show, that’s for sure.”

Blamires, who was born three miles from Burns’ own birthplace in Ayrshire, will be putting on just such a show when he hosts a massive Burns supper Jan. 16 at Sebastopol’s Masonic Center. A benefit for the Highland Clearances Memorial Fund–Blamires’ own educational group that seeks to raise awareness of the genocidal attacks on Highland Scots at the hands of the British beginning in the early 1800s–the event will hit all the proper marks of a traditional Burns blowout, including the haggis.

“We’ll be serving around 120 people, we hope, which is about 35 haggises altogether,” he relates happily, his thick brogue wrapping itself around every spoken syllable. “So there’ll be plenty of the stuff to go around.” Not an easy entrée to come by in squeamish America, the haggis will be provided by the Scottish Meat Pie Co. in Davis, one of the few such operations this side of the Atlantic. “They make a good haggis,” Blamires says. “Good and spicy, the way I like it. In Scotland, every butcher makes their own version, and they all claim theirs is the only haggis worth eating.”

For non-haggis-eaters, other fare will be served as well: sizzling servings of “neeps and tatties” (turnips and potatoes), Scottish shortbreads, oatcakes with cheese, and other authentic dishes. In true Burns Night form, the plentiful food and drink will be interspersed with speeches–“I’ll begin with a short bit about the Clearances and then be done with all the depressing stuff,” Blamires laughs–most of them honoring the self-educated farmboy whose writings include one of the most often-sung songs in the world, “Auld Lang Syne.” Following the depressing stuff is “The Immortal Memory,” as it has come to be known, an often lengthy recitation of the many fascinating facts of Burns’ life. Blamires–who is also a co-founder of Sebastopol’s annual Celtic Festival–promises that this will be observed in greatly condensed form.

“I must say,” he says, lowering his voice, “but I’ve been to Burns suppers that are absolutely tedious. They dissect every word that the man wrote. There’s certainly a place for that, but my rule of thumb for these events is to ask, ‘Would Robbie Burns himself have enjoyed it?’ If he wouldn’t have, then I’m not about to be a part of it.

“Robert Burns was a man who liked to enjoy himself,” Blamires says. “He liked good food and good company and good strong drink, so let’s remember the man, and have fun doing it.”

It’s fair to say that the thing most likely to be etched into the immortal memories of the partygoers–especially to non-Celts and first-timers to such events–is the haggis itself. With its hearty nature and inexpensive ingredients, haggis was once a dependable necessity for the hard-working farmers and peasantry of Scotland. Though often described as tasting somewhat like sausage, haggis has a puddinglike texture and a surprisingly non-meaty flavor that place it in a different category entirely.

“Haggis is haggis. And I’m certainly partial to the stuff,” Blamires robustly says. “It was a regular part of our diet growing up. I know that some people find it strange or odd or downright disgusting.”

And what about leftovers?

“Oh, leftovers are one of my perks,” he says brightly. “The stuff actually keeps very well, so I expect to be eating haggis for quite a few days afterward. I’m a very lucky man.”

From the January 8-14, 1998 issue of the Sonoma County Independent.