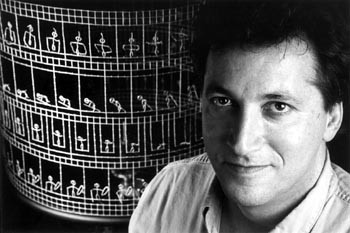 Shadows and Light: The static kinesis of filmmaker Michael Rudnick’s sculptures resonate with the vintage hand-cranked work of the Lumière brothers.

THE CONTRAPTION that filmmaker and sculptor Michael Rudnick is standing next to doesn’t reveal itself easily. A cylinder constructed of hardware cloth–that fencing most commonly seen around bug lights and saplings in city parks–is set atop a horizontal bicycle tire that turns when the motor to which it is wired is switched on. Cut from the square frames of the hardware cloth are little figures that lean and leap and leer from their individual cells, each caught in a different and minutely separate moment of movement.

But when, in this darkened room of Santa Rosa’s California Museum of Art, Rudnick switches on the “contraption,” there is more to look at than the eye can literally hold. Casting swift shadows on the walls, the cylinder turns rapidly, the figures appearing to bend, twirl a circle on a pole, or jump rope. The light trained on the images flicker 24 times each second, adding a giddy hallucinatory quality to the show. Well, actually, to the film.

Because in this age of new media squawk boxes–when video screens atop white pedestals show tape loops made with the rarefied technology of the late 20th century–what this sculptor-turned-filmmaker-turned-sculptor-again does is to deconstruct the whole notion of what a film is, until we’re back with the Lumière brothers in the stone age of cinema.

Hand-cranked movies, anyone? Rudnick’s made three such looping devices.

Examining the driving qualities of motion, narrative, and the relationships of image to viewer, Rudnick–with East Bay sculptor Lucy Puls, whose exhibit “Diction” captures thrift-store girlhood in resin and tulle–shows his “Wire Works” through March 1 at the museum.

“I think that taking my films out of the small venue, the traditional venue, and putting them in non-traditional venues is why I’ve decided to go beyond film,” says Rudnick, a San Francisco-based artist who has taught at UC Davis and who has run the alternative cinema NoNothing in the city for the past 15 years. “I thought that it would be nice to see light and expose my work to a lot broader audience other than at just art houses.”

Enrolling at the San Francisco Art Institute as a sculptor because he spied a good-looking woodshop through the window of the school, Rudnick transferred to filmmaking when he learned that the only working woodsaw in the institute belonged to the maintenance crew. In spending years making experimental works, each of them dealing more abstractly with the traditions of cinema, Rudnick dismantled both the equipment and his notions of film in the process.

“I was attempting to make films that were sculptures, to make films that had a three-dimensional quality to them. Basically, what I did was to take apart projectors and make them into sculptures. And through doing that, I learned a little bit about electricity and lights. But,” he chuckles, “I don’t own any tools and am really scared of them–I’d get shocked all the time. The technology aspect wasn’t the driving force at all. It got in the way and I had to overcome it. I continued to just try to strip away at all of that technology,” he says, pointing to his hardware cloth constructions, built in 1992. “I wanted to actually get to the point where I could make a sculpture that works as a sculpture or that has that aspect of working in motion, other than just sitting there not doing anything.”

Rudnick hasn’t been just sitting there not doing anything, either. His three hand-motored film loop machines are being used by visitors at San Francisco’s Valhalla of art and science, the Exploratorium, and at two other institutions. “I simplified [film] so much,” he says, “slowed the mechanics, demystified, and showed the relationship between individual frames, which has really become my interest. It’s something you can’t do when you’re watching a [traditional] film, but it’s the way I go about filmmaking now.

“To put things together image by image, and to think that the cutting doesn’t happen at cuts–it happens at every frame. Every frame is distinct. So in these loops that I made, every image is different, but there is an overall similarity. They work on both levels: frame-to-frame or as a story.

“Some people spend only two to three minutes with it,” he says, noting that others spend up to an hour. “Everybody who interacts with it is going to have a different experience, and I like that idea. It’s OK if you want to go through it fast or if you want to go through it slow. That’s not important to me. I like that fact that it has a tactile quality, whereas if you’re working with video or the electronic mediums, you have to use this machine, and I don’t feel that you have the same kind of control. I like the idea of getting in there with my hands.”

RUDNICK IS ALSO AWAITING final word on a patent application for an animation device he constructed “for pennies,” using materials found in most home kitchens. Because of the pending patent, he declines to specifically reveal his invention, saying simply that “it doesn’t involve motors. … It’s something that I knew deep down existed. In the end, I knew that it was something I was looking for.”

Once the visitor grasps that the three twirling, light-driven, animated cylinders whirling away in the museum’s black back room are intended to be sculptural films, ones whose stories are trapped in the cylinders, forever repeating the same actions, one begins to wonder what the rules are. What qualifies as a film; what as a sculpture? Does a story need be told–and indeed are three plotted stories playing themselves out in the shadows and light on the wall?

“I have no notions about what the limits are,” Rudnick replies. “I know that I have to make sure that I’m not slipping backwards. You can look back and see how some work reflects earlier thinking, and that to me is a starting point. But there are,” he repeats, “no limits.”

Previous ArticleWhy Has Bodhi-Dharma Left for the East?