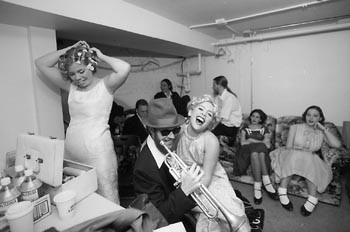 COOLNESS is a curious quality that, like liquids, takes on the shape of its container. Anything can be cool as long as cool people say it is. For example: A band of local 20-somethings enthusiastically straddling the stage at Petaluma’s Mystic Theater plays the sentimental World War II tune “Don’t Sit Under the Apple Tree.” Incredibly, the audience offers the ultimate seal of approval: they get up and dance–wildly. “If people see you’re excited about something,” explains singer Heather Ellison of the Savoy Swingers, “they’re not going to put you down, because then they‘ll look dumb.”

Since the sad demise last year of the talented Tiny James and the Swing Kings, Sonoma County had been without a band for the retro-hip to rally around. That was until last fall, when members of the avant-garde jazzsters Cannonball (who are also in several other bands) decided to form yet another subsidiary, but not one for passively listening. This music would be dance-till-you-drop interactive.

The Savoy Swingers crank out their own, often spontaneous, arrangements of swing standards, tunes made famous by Glenn Miller, Benny Goodman, and others. Bassist/trombonist Adam Theis, who has won national recognition from Jazziz magazine, founded the band, which includes Jeremy Hartley on trumpet, Jason Robinson on sax, Paul Spira on drums, and two alternating pianists: Jason Sherbundy and Ethan Herr.

Ellison and other diva Emily Schmidt (affectionately known as the Pin-Ups), are the featured vocalists–two platinum blondes who don evening gowns and costume jewelry and writhe coquettishly in their best impersonations of Betty Grable. One can almost picture them immortalized on a fighter jet.

Within a month of its inception the band began gracing some of San Francisco’s hippest swing venues, including the Hi-Ball Lounge and Coconut Grove. But to help ease Sonoma County through the tricky transition from free-form nightclub gyrations to cooperative swing dancing, the Savoy Swingers have dance instructors on hand at every show to teach during breaks. They’ve even revitalized that long-dead tradition known as the Dance Contest, complete with prizes. “With so many bands it’s about their ego,” says Ellison. “But we are just servants to the dancers. We wouldn’t be anything without them.”

Theis is quick to dub swing “real” music, as distinct from the fabricated variety that dominates radio frequencies. “It requires all the musical training you’ve had,” he says. “You can’t nonchalantly play this music,” he adds. “It engulfs you.”

The engulfing goes far. Ellison is an outspoken apologist for the good old days when life’s coarseness was mitigated by elegance and civility. In describing the appeal of swing, her words create a blurry distinction between fantasy and reality, as if she were simultaneously an ironic role-player escaping her postmodern milieu and a heartfelt arbiter on a mission to reform the masses through taste.

Indeed, a few musicians playing at a local club can rarely claim to be a part of something larger. But swing has risen to the status of a full-fledged movement pregnant with its own rituals (cheeks get kissed); fashions (two-tone shoes are everywhere); magic potions (gin and tonic); and philosophies–chief among them the belief that something very precious, some exquisite cultural gem saturated with style and substance, got lost somewhere along the path of time.

No generation ever aspires to the conventions of its parents, but grandparents are fair game, and perhaps swing is the homage, however circuitous, that youth must inevitably pay to age.

And so, now the young–society’s most ravenous consumers of popular culture–have an enthusiastic and organized following extolling music and fashion that is not new but old. Ultimately, however, historical context evaporates like yesterday’s rain, and what remains is the cheerful rainbow of swing’s upbeat tempos and witty lyrics. “You can listen to a song and forget your troubles,” coos Ellison. “It’s uplifting, instead of ‘I hate the world.'”

And it should come as no surprise that swing, the quintessential music of American optimism, can bring a smile to the cynically curled lips of Generation X.

It already got us through a war.