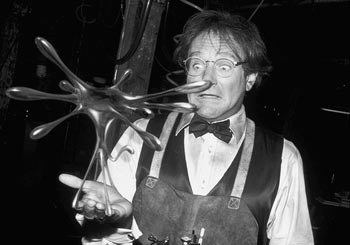 Just how many fart jokes does it take to make ‘Flubber’ a winner?

David Templeton takes interesting people to interesting movies in his ongoing quest for the ultimate post-film conversation. This time around, he phones up Mark Young–editor of The Guinness Book of World Records–for a bouncy discussion of the slapstick comedy Flubber.

MARK YOUNG has a cold, which leads him to mention that the world record for consecutive sneezes is held by Donna Griffiths of Pershore, England, near the place where the British-born Young grew up.

He explains this almost immediately after answering the phone at the Connecticut offices of the Guinness Book of World Records, of which he is publisher, editor, and CEO. “She sneezed for well over two years,” he informs me. “Something like that. Quite a long time.”

Nine hundred and seventy-eight days, to be exact. That’s according to the gleaming new 1998 edition of Guinness’ fanciful record-breaking tome (Guinness Publishing; $24.95), in which the exhausted Griffiths is said to have logged more than a million sneezes in the first year of her epic nasal snit-fit–establishing a record that has been unbeaten for 15 years.

And 15 years is about how long it felt to sit through a recent screening of Flubber, Disney’s dreadful, mean-spirited remake of The Absentminded Professor. The new film stars Robin Williams as the brilliant but forgetful inventor of flubber, a weird, bouncy glob of gunk that is possessed with unstoppable energy; the eponymous substance causes cars to fly and allows basketball players to leap from one end of the court to other.

Flubber can even be ingested and expelled, flatulently, as is demonstrated by a snarly bad guy in what is surely the most outrageous fart joke in the history of cinema.

The goo is violent, too. Applied to a bowling ball, the go-getting glob bounces thousands of feet in the air, never losing momentum even after crashing (repeatedly) onto the skulls of weapon-wielding thugs.

“I sat there thinking, ‘You gotta be kidding me,'” says Young (who might qualify for his own book as the “only living Englishman who has never seen either the TV series or the movie of Bean,” a similarly low-brow brand of slapstickish mayhem). “I mean, I like slapstick,” he insists. “It’s a very English kind of thing. But a guy being hit with a bowling ball from 20,000 feet … The first time I suppose you could say it was cute, but five times?”

“What is the record for most times being hit by a bowling ball?” I wonder.

“If it exists,” Young shoots back amiably, “I don’t want to know about it.”

Now that we’re on the subject, the movie Flubber–were it a documentary of a serious scientific discovery–could be seen as a veritable parade of world records being broken one after another: the bowling ball, certainly; the first flying car; the longest jump through a basketball hoop.

And the flimsiest excuse for missing your own wedding.

“Right,” Young laughs. “What did WIlliams say? ‘I’m only absent-minded because I love you so much.’ That’s why he missed his wedding three times. Tell you what, I’m gonna try that one on my wife, you try it on yours, and let’s see what happens. That’s when the bowling ball will come into play for us, no doubt,” he adds.

“Flubber itself, the invention, would qualify for Guinness, wouldn’t it?” I ask.

“Oh yeah,” he affirms. “We certainly have lots of entries for science; the lowest coefficient of friction, the smelliest substance, and all this kind of business. That is an area where we find more and more interesting things. In fact, somebody–we just found out recently–has made the world’s smallest guitar out of subatomic particles. It’s a nanometer long or something.

“Wait a minute,” he interrupts himself. “I want to go get a copy of the book. I gave mine to Kenny G this morning.” The famous soft jazz saxophonist had met with Young and other Guinness officials to establish the world record for the longest sustained note on a musical instrument. His record: over 45 minutes.

“Here it is,” Young says on returning. “Page 181. ‘Harold Craighead and Dustin Carr of Cornell University sculpted the “nanoguitar” out of a single crystal of silicon. The guitar measures 10 micrometers long, about the size of a human blood cell.’ These guys must have had nothing to do that day.”

“Back to the bowling ball,” I say, “is there anything about ‘most bounces by a 10-pound ball’ or anything?”

“There are plenty of pogo-stick records, that’s for sure,” he replies. “We used to have the largest rubber-band ball, but I don’t think we have that anymore.” He admits that a flubberized bowling ball would easily rate a mention in the book.

“Though I’m not sure I’d put it in,” he sighs. “I just personally disliked that whole scene so much that maybe I would just use my line-item veto and just say no.

“I don’t know how principled a character I am,” he continues, “but that scene did bug me. Today, we’re bombarded with so much violence that we’re not quite sure what the line is anymore. God, I’m sounding so preachy here, but in Flubber there was a real crudity to all the head whacking. There was no style to it.”

“Oh, come on,” I insist. “There was style to that flubberized fart scene.”

“We’ve never seen anything like that before, have we?” he chuckles. “You’re right about that.”

“Does that mean it qualifies for the book?” I wonder.

“Hmmm,” Young ponders. “I suppose we’ll just use the line-item veto on that one as well, don’t you think?”