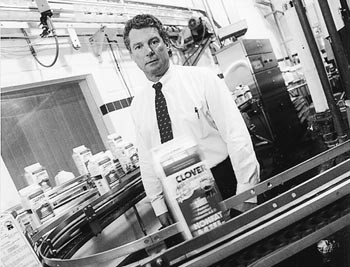 Clo’s Call: Clover Stornetta executive Dan Benedetti believes that sourcing milk like wine will reforge the bond between consumer and producer. In fact, he’s bet the farm on it.

Getting to the source of premium milk

SHE APPEARS everywhere, as “Cowpernicus and the Milky Way,” or as Chief Justice of the “Supreme Quart,” or as the “Cloreogrheifer” with her dancing cows. Clo, the cartoon cow of the whimsical puns, is the udderly divine creation of the Clover Stornetta dairy, whose offices are located in a collection of buildings a few blocks from downtown Petaluma. A utilitarian corridor in one of these buildings leads to the small office of the company president.

The man who occupies that office is Dan Benedetti, one of the company’s eight owners and its most frequent spokesman. Lean and dynamic, Benedetti speaks of the time, a few years ago, when a dark cloud appeared on Clo’s cheerful horizon.

The manner in which the company avoided the storm, and became even more successful, is a story with a very Sonoma County (Cownty?) twist.

What worried Clover Stornetta can be summed up in four letters: rBGH (recombinant bovine growth hormone). A genetically engineered way to increase milk production, rBGH has been banned in Europe as unnecessary and possibly harmful, but it is legal in the United States.

“It was an ugly scenario for consumers, especially in California,” says Benedetti. “Our customer base is the most active and informed in the country.” He didn’t think his customers would want rBGH-grown milk.

A simple problem to solve, it seemed. None of the dairies supplying Clover Stornetta used the hormone, so just label the milk rBGH-free, right? Wrong. The FDA, at the behest of rBGH-producer Monsanto, tested rBGH milk and found it identical to non-rBGH milk, and harmless to humans. Since the milk was identical, according to the FDA, it wasn’t possible to label the milk as non-rBGH. Why?

Because milk is a commodity, the equivalent of a jug wine; there isn’t a milk equivalent of “vineyard-designated” wine. It was impossible, according to the government, to say which milk was produced with rBGH, and which was not.

The problem wasn’t just one of how to label milk. Clover Stornetta’s customers think of the dairy as part of their community, and the feeling is mutual. Purchases of local milk keep many family farms viable, and the company is committed to the future of Sonoma County agriculture. Out of this sense of community came a decision to give customers an assurance of quality, but one that went far beyond the absence of rBGH. In a way, they wanted to return to an earlier time. Benedetti says, “We wanted the producer-consumer link back that we’ve lost since the Industrial Revolution.”

Benedetti’s eyes take on a zealous intensity as he describes the result: the North Coast Excellence program. Sonoma County’s wine industry provided a model. A bottle of wine has an appellation that tells the buyer where the grapes came from. This in turn indicates something about the kind of climate and soil that produced the grapes, and a level of quality is implied. North Coast Excellence goes beyond these standards.

“We wanted a program that no one else in the dairy industry could duplicate,” says Benedetti. Clover Stornetta wanted to sell “premium” milk, not “jug” milk.

Virtually no dairy can name the farms a particular batch of milk came from. The exceptions are small dairies, like the Strauss family’s Marin County dairy, which is certified organic. Clover Stornetta now sources its milk, receiving it fresh daily from farms in Marin, Sonoma, and Mendocino counties.

Premium wineries document the sources of their grapes and often specify vineyard practices. Clover Stornetta documents the sources of its milk and requires these farms to meet standards that go beyond even those of the wine industry. Standards include climate, the ratio of acreage to herd size, and even the appearance of the ranch.

Instead of housing 4,000 cows in 50 acres of agribusiness barns, with sprinklers to cool off the cows, the farms supplying Clover Stornetta are more likely to have 300 cows grazing on 500 acres. “I can’t quote you a study that proves it,” says Benedetti, “but it seems to me that a grazing cow, with better muscle tone, is going to produce better milk.” Free-range cows–what a concept! As for rBGH, “It may not be bad for humans,” says Benedetti, “but what about the cows? The jury is still out.”

Farmers supplying North Coast Excellence milk are required to submit a farm plan, to assure that good management and environmental practices are followed. Farmers are then asked, Benedetti says, to “take an aspect of that plan to the next level.”

Clover Stornetta will soon have the North Coast Excellence program certified annually by an independent agency, according to Benedetti, “so that the consumer can see that what we market is real.”

Is the program working? It does for the farmers. Their costs are higher, but they’re being paid more for their milk; they are no longer selling just a commodity.

As for consumers, the program has ensured Clover Stornetta of the highest-quality raw milk in the industry. The bacteria count for Clo’s milk, for example, is 99 percent lower than that permitted by USDA regulations. And the flavor? If Clover Stornetta can apply a few tricks of the wine trade, so can their customers: Buy several brands and do a blind tasting. It won’t even be a Clo’s call.

Like many wineries, Clover Stornetta has produced a cookbook, Sonoma County … Its Bounty. Proceeds go to the Agricultural Fund of the Sonoma County Community Foundation. Available at local bookstores or by sending $24.50 to the author, Ellen Moorehead, at 64 Jesse Lane, Petaluma, CA 94952.