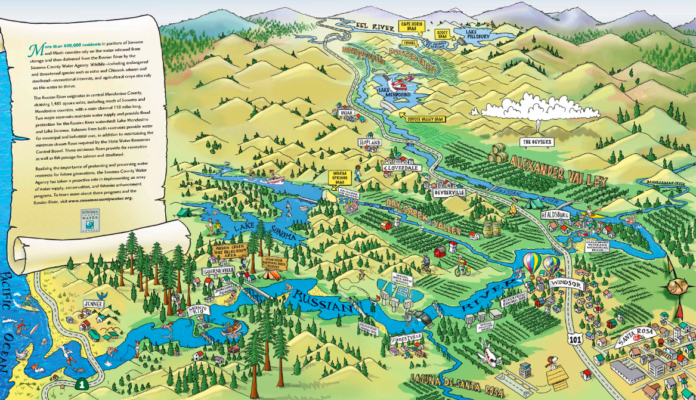 StormPost: Good news on the Russian River; Loose cows on the Drake Blvd

As the winter storm grinds across the region, the good news in Sonoma County is county emergency ops people are “significantly downscaling” their expectation of the high water mark for the Russian River.

After forecasting a possible peak of 37.5 feet, officials now expect about a 34 foot peak in the river, tomorrow at 10 a.m. “There still will be flooding at the Russian River but we expect a much lower impact,” says Rebecca Wachsberg at the emergency ops center.

Still, they’re ready to ramp up evac procedures if needed, Noah, even as the county downscales the voluntary get-out planning and its pre-plan expectations of low-lying residents in light of the re-scaled storm expectations. Emergency workers “have the capacity to scale it up if they need to,” says Wachsberg, “but we’re not anticipating it.”

For commuters: There are still 61 roads closed around the county, says Wachsberg. Take it for what it’s worth, and next time: stay home.

Hey, more good news from Wachsberg: Power’s been restored to about half of the 20,000 who lost it at the high point of darkness earlier today.

In Marin County, there are cows presently blocking the road on Sir Francis Drake Boulevard as crews try to clear power lines that came down with a tree not long ago.

The Drake’s now closed in both directions in Lagunitas, says Talia Smith, a public information officer with the Marin County Emergency Services.

Along with other daylong road closures in West Marin, the closed and then reopened, 37 Connector at Highway 101 is now CLOSED. For the time being, they hope.

The biggest problem in Marin is flooding, downed trees and lines, and Mill Valley is taking the biggest hit on the flood front. Latest to wash out, says Smith, is Sycamore Park, between Miller Ave and East Blithesdale.

No crushed cars anywhere in the county, Smith reports – and one downed branch put some minor damage on a house.

High tide is now, or just about a half our after, as we crank out this blog in Bolinas, where it is pouring even as as the storm moves south, according to Smith and all the weather folks out there.

The biggest damage this reporter could see in Bolinas, at least in the immediate ’hood: The Paul Collet memorial bench along Ocean Parkway, crushed – a fallen branch from the big evergreen that provides shade.

Many days you can see S.F. from this spot. Today?! Hah! There’s brown muck churning at the surge-point as it eats the cliffs below, with sluices of sheer runoff roiling everywhere – piles of debris, water just pouring and tearing the place up. It’s pouring again.