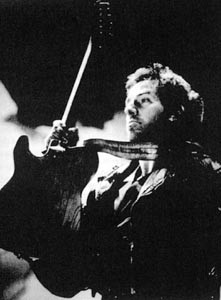 AT HIS BEST, Bruce Springsteen’s songs are mini morality plays, chronicling the lives of what music writer Robert Santelli has called “good people . . . poisoned by bad luck and malice.” For these misfits–whose hard-luck tales, shattered dreams, and broken lives resonate with Sprinsteen’s legion of fans–it is a hard road to the promised land.

As a rock-and-roll working-class hero and plainspoken visionary who rode the downbound train to fame and fortune, Springsteen plumbed his darkest side as a songwriter and storyteller on 1982’s Nebraska, a noncommercial solo acoustic set of 10 songs that serve as the focus of a newly released big-name tribute featuring Los Lobos, Aimee Mann and Michael Penn, Dar Williams, and Ani DeFranco, among others.

The stark original, recorded at home on a four-track tape recorder, was fraught with losers, desperadoes, and killers caught in the cold glare of the headlights and recounted in stripped-down folk arrangements and with no apologies.

Badlands: A Tribute to Bruce Springsteen’s Nebraska (Sub Pop) never tops the original, but plenty of highlights make this worthwhile for any rock fan. (The 13-track CD adds three songs–including two from Born in the U.S.A., Springsteen’s hyper-commercial 1984 release–originally recorded during the Nebraska sessions.)

Some artists manage to reinterpret the songs in interesting fashion–as should the best of any tribute album–bending and reshaping the original songs to their own distinctive style. Others–the Crooked Fingers version of “Mansion on the Hill,” for instance–leave you wondering if the Boss himself wasn’t behind the mic.

Chrissie Hynde and Adam Seymour of the Pretenders kick off the tribute with a dreamy and somewhat dreary rendering of Nebraska‘s title track, a first-person account of mass murderer Charlie Starkweather’s killing spree–filmmaker Terrence Malick had told the same tale in his 1973 film Badlands (a name later used as a Springsteen song title).

But arguably the best track on the CD is Hank Williams III’s take on “Atlantic City,” a full-blown hillbilly reverie replete with country fiddle and passages from Hank Sr.’s oeuvre. In fact, the successful countrified transformation of these Americana classics–Hank III’s aforementioned showstopper, Deanna Carter’s “State Trooper,” Son Volt’s “Open All Night,” Ben Harper’s “My Father’s House,” and Johnny Cash’s “I’m on Fire”–makes you wonder why Nashville has been slow to drink from Springsteen’s well in the past.

Indeed, it’s the songs at the core of these remakes that shine throughout Badlands. As heartland rock, this tribute succeeds in showing why Nebraska remains one of the most challenging recordings ever released by a major rock act.