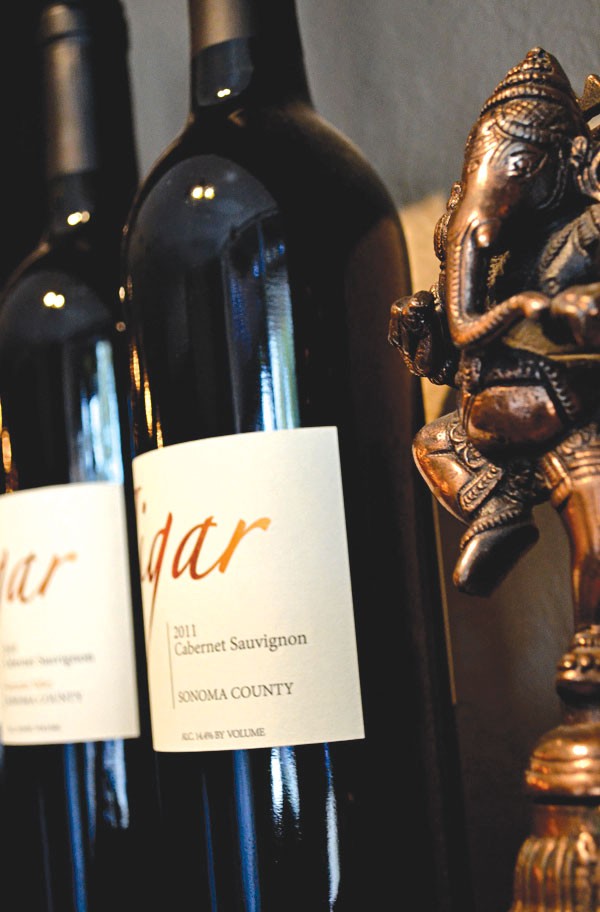 Jigar Wines is a Hoosier heaven blessed by Ganesh

I’ve been passing by the Jigar Wines tasting room in Forestville for two years now, only thinking to myself, huh, never heard of that one—guess I’ll have to stop by sometime. But some folks screech to a halt when they see the sign—they’ve just got to go in and get the story.

In the Indian state of Gujarat, winery owner Jigar Patel’s name is so common, “it’s like Mike Smith,” says Jigar Wines office manager Patrick Lytle, who’s just finished his last case delivery for the day and is sharing the winetasting with our group. Not so common is a winery run by a guy with an Indian name, and that’s why vacationing Indian and Indian-American families on their way up Highway 116 often stop in, just to make sure. Satisfied thus, they usually buy a bottle and continue on their way.

Toronto-born and raised in Chicago, Patel attended Purdue University in Indiana, where he met winemaker Josh Bartels (formerly of Kokomo Winery) and Lytle, as well. One of our group is from the area, and in no time everybody is reminiscing about places like Shelbyville and Batesville. “You can’t escape Hoosiers out here,” says Lytle.

A former service station, the building was spiffed up for its one-time stint as an art gallery. But inside, it’s just casual, walk-up winetasting. Whether it’s power of suggestion from the Ganesh statuette or the Grateful Dead poster, or just the choice of oak barrels, the 2012 Russian River Valley Pinot Noir ($32) makes me think of spicy incense. While Jigar Wines does not choose to highlight Indian food pairings, this might rock with chana masala.

Good news for Cab and Zin fans, the wines get bigger and the prices smaller as we move down the list. I’m told the 2014 Dry Creek Valley Zinfandel ($28) is a “departure” from their usual style, but it’s a departure to boysenberry goodness. Frankly fruity, soft and plush, the 2013 Sonoma County Cabernet Sauvignon ($28) is less claret-like than the silky 2013 Dry Creek Valley Malbec ($28). The northern Rhône-ish 2013 Raja Cuvée ($24) is named for Patel’s dog—”King” being a good name for a boxer. With 48 percent Mendocino County Syrah in the blend, it’s certainly got that animale aroma.