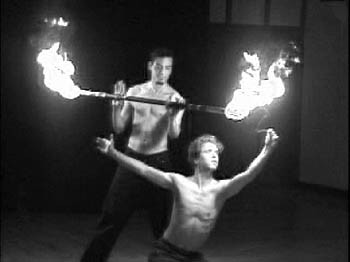 Like the wild art party that inspires it, the exhibit of Burning Man art at the Sonoma Museum of Visual Art is a little disconcerting. It transplants art created for the desert to a green lawn next to the hum and blur of Highway 101. It also strips away the debauchery, leaving works that are both challenging and . . . family friendly?

“This is out in community space,” acknowledges Gay Shelton, director of SMOVA, which is showing six works from Burning Man through July 28. “That community is a different community than Burning Man, and different from museum community. How do you create an intersection for these communities? That’s what this show attempts to do.”

In addition to a G-rating, Shelton and co-curator Sarah Stoller selected for aesthetic values and craftsmanship. But most important, they sought the Burning Man essence: participation. “As an artist, I don’t think you’ll ever get as good an audience as you get at Burning Man,” Shelton says, strolling past Byron Chell’s giant welded Playa Bells. “At an art show or museum, people kind of expect to go in and have it given to them. At Burning Man people expect to complete the piece.”

SMOVA’s Burning Man show–sponsored by the Northern California Bohemian–is the museum’s first totally outdoor exhibit, and a possible prototype for future Burning Man art exhibits outside the borders of Nevada’s Black Rock City. But Shelton is careful to specify that the event is not Burning Man.

“It’s not intended to be Burning Man,” says Shelton, who first visited Burning Man herself last year. “We simply wanted to create a container for this interactive art activity and bring it into the world. A lot of people are never going to go to Burning Man, but they can take a real ride on these works.”

SMOVA’s Burning Man Ignition Party takes place Saturday, July 28, from 6 to 11 p.m. The no-alcohol, family-oriented festivities include drumming, fire and snake dancing, and excerpts from the fire opera Prometheus’ Revenge. Admission is $10; people in costumes get in free. For exhibit info, call 707/527-0297.