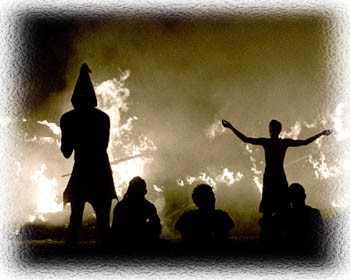 Revel without a Cause

IT WAS MY FIRST night behind the counter at the all-night cafe. In three short hours I had seen a lot, but not enough to prepare me for the blonde man’s simple question. “Will you give me a latte if I stick this steak knife up my nose?”

That’s the kind of place it is, the cafe at the center of Burning Man, the now-legendary outsider arts romp and bonfire that pitches camp in Black Rock Desert, Nev., every summer. In 1999, my first year, I worked at the cafe in exchange for my ticket. It was a matter of finances. But the cafe quickly became my benchmark for craziness amid the brilliant chaos of Burning Man.

Like the time we were held up. The group blocked the counter, their faces masked by bandannas. “Taking money goes against the fundamental spirit of Burning Man,” yelled the leader at the line of bleary-eyed humanity that snaked out of the tent. “No money at Burning Man!”

The barrista, a laconic young man with fast hands and a slow smile, leaned over the counter. “What are your demands?”

The leader rambled on for a few minutes about liberating Black Rock City from the oppressive system of money-based monopoly, but then stopped and said, “We’ll come back tomorrow and perform on our unicycles if you give us a gallon of chai mix.” A jug of chai was passed across the counter, and the band of coffeehouse bandits melted away.

Burned Out? Has Burning Man sold out?

The guerrilla girl was basically right: other than the admission fee, cafe drinks, and ice–which is sold to benefit neighboring towns–there is no commerce at Burning Man. But there are other ways to get what you need out here in the desert. One camp barters with pancake breakfasts, and its parameters for exchange are pretty loose. I watched one hungry gentleman wrestle with an inflatable sex doll for a short stack.

However you get your pancakes, Burning Man organizers are adamant on one point: no spectating. It bothered me mightily that first year. No matter how deftly I handed out change, I couldn’t delude myself that serving coffee was art. Then I saw my chance to break through the veil, a traveling bar that drew photographers like flies to a porta-potty. Clueless voyeurs were grabbed by a dominatrix and brought to face the tipsy tribunal. “SING, DANCE, OR DROP YOUR PANTS!” they roared. Hoping to avoid the humiliating prologue, I walked up to the hostess in leatherette and offered to sing “Happy Birthday to You” in Russian. In return I got a paper cup of vodka and cranberry juice and some weak applause. Didn’t matter. I had officially, through a megaphone, participated.

For this year’s festival (which starts Aug. 27), I’m hooking up with a woman from Southern California who’s creating a temple to the snake goddess, complete with snakes. Whatever. I just want to dance. The woman says choreographed performances are rare, and I think she’s right. Most of Burning Man is an unscripted, uncensored funhouse, full of flame twirlers and croquet lawns and titty bars and adult-sized teeter-totters.

OF ALL THE ARTS, sculpture and assemblage are best represented, with artists from around the world using anything from cow bones to scrap metal to state-of-the-art computer light displays. Everything manmade stands out as though in a spotlight; the desert is an excellent backdrop, blank and unblinking and dusty as hell.

Of course, it takes a lot of work to live and make art in the desert. Labyrinths and geodesic thunderdomes and espresso drinks for 30,000 people are incredibly labor-intensive enterprises. By necessity, Burning Man is an experiment in various levels of community and collaboration. With more than 70 volunteers, the cafe community is loose but lavish with perks: a clean porta-potty, free java, and even free ice from time to time. The ice man took a fancy to me; once, when I was fighting a sore throat, he gave me half of his mango. Now that’s community. Or maybe just lechery. I’m still not sure.

The mango was a rare treat. Fruit doesn’t last long in the desert; the hot wind sucks the juice out of everything. People dress for the heat differently. I went for total coverage (the drag queens next door called me Nanook of the Desert), in contrast to my friend, a naked, green-glittered cowboy who busted through every open outhouse door we passed and shot his special-effects ray gun at the people who forgot to lock behind themselves. “They won’t forget again,” he said, pushing back his hat and ambling on.

That’s about the only enforcement of law or public decency that I’ve seen at Burning Man. People have the right to be as flamboyantly foolish as they like here. Which brings me back to the man with the steak knife.

While the line behind him crowded around, he licked the blade of the knife, tilted his head back and slowly, carefully inserted the blade up his nose to the hilt. The crowd gasped, and I turned to my co-worker as the knife sniffer removed the knife and began flossing his nasal cavity through his mouth. “Give that man a latte,” I murmured. “Make it a triple.”