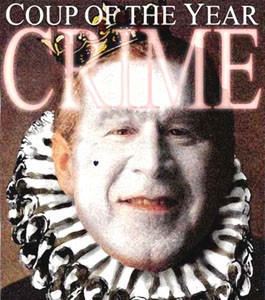 The Internet abounds with Bush-bashing websites

ACCORDING to a Fox News poll taken in late June, 58 percent of Americans are still angry about the 2000 presidential election. That’s Fox News, TV’s most conservative network. And that’s June, more than six months after the Supreme Court handed over the presidency to George W. Bush.

Polls often aren’t reliable. They can be easily manipulated. But a 58 percent anger rating among Americans toward an election that has widely been called a stolen election, an illegitimate election, and an undemocratic election feels right. Americans who reside in the blue states, to put it bluntly, are pissed.

Still, there has been very little press attention on anger about the Florida ballot debacle. No major news documentaries have been made on the subject. A senior producer at Frontline proposed one this spring, but supposedly it was shelved because “there was no story” in it. (However, Globalvision, the New York-based independent media company, is completing an investigative film, Counting on Democracy, that will likely go to the underbelly of the Florida election.)

The corporate-owned media also have been working extra hard to avoid the subject. Only the briefest coverage was given to the June Civil Rights Commission report on the election, which found, among other voting disasters, that black voters’ ballots were 10 times more likely to be thrown out than those of white voters.

Log onto the Web, though, and type “anti-Bush,” and you will be faced with a different vision of American public opinion. There are now approximately 800 sites whose mission is to analyze, attack, and especially ridicule the 43rd president of the United States. Anti-Bush websites may not be visited by all the Americans of the Fox News poll, but they do show that the Internet has become home to the largest, most underreported political coalition in the United States–what I call the anti-Bushies.

FIRST STOP on the anti-Bushie Web tour should be Anti-Bush.com. There you will find links to hundreds of sites that not only give in-depth accounts of Dubya’s past and current dealings (often barely reported by the mainstream press), but offer information about protests, letter-writing campaigns, and strategies to “take back the dark night of American politics.”

Or go to Hated.com, another top anti-Bush hub, whose tag line is “The Will of the People vs. the Never-Elected President,” and from there embarks on what amounts to a cathartic online journey for those who loathe the president. Sites of this sort include GoBackToTexas.com, BushonCrack.com, and LickBush-2000.com, the last of which seeks to put “racy back in democracy.”

What’s amazing about anti-Bush websites is not just their sophomoric humor but the steadfastness with which some follow the president. BushReport.com, for example, offers on a daily basis 20 to 40 “handmade, linked headlines” on any gaffe or guarantee the president makes. And there are a few more, such as DemocraticUnderground.com and Democrats.com, which not only aim to skewer Bush but do so in a sophisticated, hard-news fashion, with tiny staffs who often get no pay. The editors of these sites say they receive on average 200,000 monthly visits.

Why is the readership of these 1- or 2-year-old zines so high? Well, according to the editor of BartCop.com, one of the most irreverent anti-Bush sites, it’s because “people can’t believe the media [are] giving Bush such a free ride.”

David Allen, the editor of DemocraticUnderground.com, also says he is fueled by anger at the press, which he argues is one of the reasons anti-Bush websites are so acerbic. “At first we were typical liberals,” says Allen, “bent on being fair and understanding the opposition’s point of view. But then we said to ourselves: ‘Why should we, when they don’t bother to understand ours?’ ” Democratic Underground’s most popular feature is a weekly column called “The Top 10 Conservative Idiots,” which Allen says is a joy to publish.

Allen is in a good company among those who “get a guilty pleasure” from bashing Bush. I spoke to one woman who lives in a gated community in North Carolina who said that the maintenance of her site, BushIsNotPresident.com, is pure therapy. “It’s so satisfying,” says Kim (who asked her last name be withheld). “I’ve gotten so much e-mail thanking me for my work, which means a lot since I live in an area where there isn’t much outrage against the administration.”

Are the anti-Bushies, then, just a disconnected coterie of angry, tech-oriented liberals? Not so, according to Bob Fertik, editor of Democrats.com, a daily news service and grassroots networking organization. Fertik argues that websites critical of Bush, and the people who are drawn to them, are just one manifestation of the “tremendous anger and frustration felt by an enormous [number] of Americans” toward the White House.

“You have to realize that every place Bush, Cheney, Rumsfeld, Reinquist, and Scalia have gone, there [have been] protests,” he says. “And none of these protests have received the slightest media coverage.”

Fertik argues that the websites, the protests, or any actions or opinions that are highly critical of Bush’s policies are “systematically denied by the mainstream media.”

ANTI-BUSH sites did have a very small day in the media sun in May. Tipped off that he was being eviscerated on the Web, Bush filed a legal complaint with the Federal Communications Commission against the creators of the satirical gwbush.com. And, in an attempt to quash the cyber-rebellion, Karl Rove, Bush’s White House adviser, used his Karl Rove & Company to buy up 57 anti-Bush domain names.

The result: no FCC lawsuit but 6 million visits to gwbush.com and only 30,000 to Bush’s official site. Now when you go to Karl Rove & Company’s BushSux.com or BushBites.com, you are redirected (for an even greater joke) to the placid Bush site. Go anywhere else on the anti-Bush cyber-realm, though, and you get “600 pages of documented lies,” “T-Shirts That Tell the Truth,” and an encyclopedia of Bushisms with hourly additions.

The desire to bash Bush and to read such bashing has also been good for all manner of progressive publications, which have seen their readership increase with every new article damning Dubya. AlterNet.org’s lead story in June was “Bush Speak: An Interview with Mark Crispin Miller,” who also has been enjoying hearty sales of his book The Bush Dyslexicon. The Nation, The American Prospect, and The Progressive assault Bush at every turn. Salon.com can’t seem to get enough of Bush bashing. Its new section, , was conceived of as a journalistically pleasurable moneymaker.

Explains Gary Kamiya, Salon‘s executive editor, “We launched Bushed! because it was just too painful to suffer through the term of this reactionary bumbler in silence, and because we suspected that there were many people across this great country who would pay money to see a whoopee cushion placed under him on a daily or even hourly basis.

“That money would allow us, in Bush’s words, to put food on our family.”

IT IS NOT CLEAR that Salon is putting food on its family by asking its readers to pay for its Bushed! rabble-rousing. Nor does anyone know how many anti-Bushies are out there, or if they even vote. But given the amount of time and energy being expended on sites blasting Bush and the fact that the lead ones have received millions of visitors, there is no doubt that the Internet has replaced the soapbox for left-wing Americans.

“Naturally, Bush websites could not exist without two ingredients, Bush and the Internet,” offers Jerry Politex, editor of BushWatch.com.

“If Bush has not been selected as our president by the Supreme Court, there would be no need for Bush sites. If the Internet did not exist, we would be passing out broadsheets about Bush on street corners.”

But imagine if all the anti-Bush messages went beyond the confines of cyberspace. Imagine if they were echoed by the networks and written about in the mainstream dailies. Then the anti-Bushies would be considered an unavoidable political group.

In fact, a majority coalition in an era of apathy toward politics.