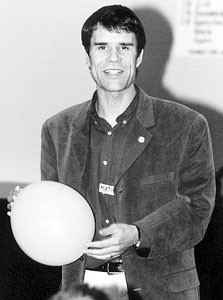 Ballooning Out Of Control: Mathis Wackernagel demonstrates how resources can be stretched to the breaking point.

So how big is yours?” That was the question on everyone’s lips when several dozen environmentalists, scientists, and North Bay community leaders came together on May 10 for a three-hour conference focusing almost entirely on feet. Or to be specific, footprints. Ecological footprints.

The rather unusual public meeting–sponsored by Sustainable Sonoma County, headquartered in Sebastopol, and the Oakland-based Redefining Progress–marked the big moment for the Sonoma County Ecological Footprint Project. As announced last November, the project was launched in order to calculate the size of Sonoma County’s ecological footprint and to compare it to the average national and international footprints and the footprints of neighboring counties.

We’re not talking about shoe sizes.

Simply put, your ecological footprint–an idea developed about 10 years ago by activist and author Mathis Wackernagel, director of Redefining Progress–is a calculation of the demand an individual puts on nature, based on the average amount of resources one consumes. Taking into account such things as transportation, housing, and food, each footprint is expressed in terms of acres. The more stuff one uses up, the bigger one’s footprint. In this case, bigger is not better.

Wackernagel, appearing early on in the conference to announce his findings, provided a bit of context by first informing the crowd that the average American leaves an ecological footprint of 24 acres, which he compared to France where the average is 13 acres. Marin County, it turns out, exceeds the U.S. national average with a footprint of 27 acres, and Sonoma County (drumroll, please) comes in just under the national average with a footprint of 22 acres per person. Think that doesn’t sound so bad?

“Consider this,” explained Ann Hancock, Sonoma County Footprint Project coordinator. “If everyone on the planet consumed like we do in Sonoma [County], it would use up four more Earths.”

The whole concept of the ecological footprint, she explains, has become a common tool among scientists and ecologists studying the earth’s capacity and different populations’ demand on it. The footprint’s greatest value, according to Hancock, is that the concept is rather compelling, relatively simple to understand, and easy to visualize. To date, hundreds of thousands have estimated their own personal ecological footprints by logging on to www.myfootprint.org. There, a simple 16-point questionnaire asks you for such information as how many times a week you eat meat, what size home you live in, and what kind of mileage your automobile gets. A click of a button later, the size of your footprint appears, along with the number of planets that would be chewed through were every human on earth consuming at that same rate.

Lest overwhelmed foot-measurers become despondent and suicidal at the size of their prints, Hancock says there are plenty of fairly painless steps one can take to reduce footprint size. Drive less. Conserve energy. Go to farmers markets more.

Hancock jokingly suggests distributing little buttons to those trying to reduce their own footprints. “Really. They could all say, ‘Mine’s Smaller!'” she laughs.

For an environmentalist in touch with the kind of numbers reported at the conference, Hancock and Wackernagel were both in surprisingly high spirits. Which points to yet another radical idea that emerged at the event: a sense of humor.

Throughout the conference–which was attended by only one North Bay politician, Windsor councilmember Debbie Fudge–a remarkable spirit of lighthearted fun kept popping up among all the furrowed brows and frightening statistics.

Hancock says the levity was intentional.

“I’ve been looking for ways to find humor amidst all of the usual environmentalist doom and gloom.” There’s another reason for injecting humor into the report. Says Hancock, with a laugh, “We’re distributing 500 copies to every elected official and community and business leader in the area. So if we make it fun to pick up, maybe they’ll actually read it.”

Copies of the Sonoma County Ecological Footprint Project report can be obtained by calling Sustainable Sonoma County at 707.829.1224 or by visiting www.sustainablesonoma.org.