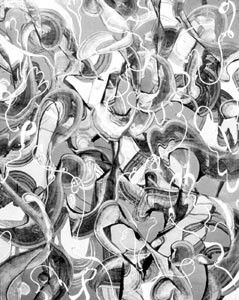 For The Birds: An example of Amy Wilson’s earlier work, ‘Quiver’ flourishes and flirts with bold, macho strokes.

Should we talk about gender when we look at art?

The once bustling Rohnert Park campus of the Next Level Communications offices is now like a ghost village–it’s really too big to just be a town. One building is completely closed, and the other has a few anxious executives and many empty cubicles tuned to the unearthly hum of computer servers stacked in dust-free rooms. The lights are dimmed to save energy, and in this shadowy enclave of sapped enigma quietly glow the energetic, vital forms of an elderly man whose obsession with the line, the triangle, and the circle will evidently never be sapped.

Healdsburg painter Horst Trave, now 83 and one of the founding members of the San Francisco school of Abstract Expressionism, exhibits a full-length retrospective of his career, titled “The Objective Eye,” here through November. Walking the halls, listening to my own heels ring out in the humming silence, I too am gratefully immersed in the line, the triangle, and the circle. Though Trave’s canvases are titled by the date that he completes each one, there is a timelessness to the work that seems to refute one painting being 30 years old and another more recent. Reds put to canvas in 1976 echo the reds he marked in 1958, which harken his crimsons for the new millennium.

The deep rejection Trave has to subjectivity, to representation, to any aesthetic concern that can’t be completely answered and examined within the confines of each individual canvas is relentless and stunning. While entropy reigns in the halls of a devolving tele-economy, a fresh demanding spirit–some of it 60 years old–frankly breathes from the walls.

I turn a corner. The Trave paintings end, and the curatorial team is hanging another’s work. Brightly colored with recognizable forms and an almost giddy air, these paintings contrast sharply with Trave’s luminous world. I give a quick glance and literally sniff to myself in irritation. “Women’s work,” I think with fast disdain and physically turn away.

Stupendously, enormously, shamefully wrong. The work that I so ridiculously dismissed as being a woman’s–and therefore an irritant–is by the late William Morehouse, one of the “Sonoma Four” group that included William Wheeler, Jack Stuppin, and Tony King. These four artists turned the somewhat fey pleasures of plein air painting–a genre itself criticized as being indulged in by Sunday dabblers–into a ripe masculine opportunity for drink, travel, and riotous argument.

My snap error was an instantaneous private thought. But why should the erroneous perception that a painting was created by a woman make me enjoy it any less, particularly since I’ve never been aware of considering an artist’s gender otherwise?

San Francisco artist Amy Wilson is all over this. Exhibiting seven paintings under the title “Curve and Flourish” at the Sonoma Museum of Visual Art through June 30, Wilson sets out to exactly produce “woman’s” work and thereby aims to uproot any such lingering thoughts by simply blasting them out–in the prettiest way possible.

Working on massive canvases, roughly as big as she is at 5’8″, Wilson has carefully chosen a “feminine” color palette of delicate greens, pinks, and purples. And her womanly themes–food, food, sex, food, decoration, food, sex–are in direct opposition to what she feels to be a macho element in painting, best exemplified by the explosive works of such postwar artists practicing Abstract Expressionism as Jackson Pollock.

“I call it Power Puff art,” Wilson says cheerily of her oeuvre by phone from her San Francisco studio. “My premise is that we do interpret form in terms of gender, totally apart from subject matter itself. My idea was to identify colors, shapes, and lines that are perceived as being feminine and then make a painting that could also be identified that way. They’re almost Abstract Expressionist parody paintings,” she says.

Gay Dawson, director of SMOVA, suggests that Abstract Expressionism is known for “an uncontrolled, raw, spontaneous, almost childlike aesthetic” that Wilson upends. According to Dawson, Wilson seems to ask, “How can I make a painting with the opposite values and still have a presence in the room?”

Dr. Susan Landauer, chief curator of the San Jose Museum of Art and author of The San Francisco School of Abstract Expressionism, cites Franz Kline as an example of a gender-based artist of the past. “[He] was known for his big brush and very masculine work,” Landauer says. “His paintings encapsulated the power that was seen to be expressing America’s brawn to the rest of the world after WWII. That kind of muscular heroics was common in the work of the New York school [of Abstract Expressionism]. A lot of it came from a sense of machismo.”

Citing just four women who were involved in the movement centered around the California School of Fine Arts (now the San Francisco Art Institute), Landauer agrees, “there was a definite bias against women.”

But surely that’s changed? Wilson, who received her MFA in 1999, says, “When I was in graduate school, I had done these very decorative works. I showed them in a seminar and the teacher said, ‘These are likeable but not respectable.’ I felt like he was speaking to the prettiness of the work and that, frankly, he wouldn’t have said this to a male student.”

Well, pretty is as pretty does, and such paintings of Wilson’s as Fancy, Sweet Thing, and Bustle do first and foremost please the eye. Mannered, exact, in some cases verging on the obsessive (as with her older decorative abstracts such as Quiver and Creeper), they seem to be about voluptuousness, comfort, and, perhaps, the well-appointed pleasures of a ’50s-era dinner party, the hostess a vision in sheer apron and heels serving one of those froufrou desserts found on old recipe cards.

But my goodness, isn’t that a baby-bottle nipple pierced with lacy fillip in Bustle? Doesn’t Sweet Thing offer two white thighs scooped hugely onto an ice cream dish with a large pink pudendum rising horribly up between them, a pubic frizz scorched atop? Is that bacon snaking nastily up the walls in Quiver? And doesn’t Fancy appear to have a yellowed bone upended in the confectionery fun, a line of merry peppermints cascading innocently right through the marrow?

“They’re subversive,” Wilson agrees with a chuckle. “I want them to be seductive in a way, something that’s offering itself up to be consumed.”

And then perhaps spat out again, when a tasty nugget of poison is gingerly tongued.

But wait, now that I’m having subconscious thoughts bubble to the surface, I wonder why Trave continues to follow a path of objective examination he started some 60 years ago, and why Wilson uses painting to express her modern feminism. Shouldn’t he have done it all by now? Shouldn’t she be making videos or hanging artfully from the rafters in a warehouse somewhere?

Why, in short, paint at all–male or female?

Trave has said that he does it for no better reason than it makes him “feel human,” which is certainly reason enough.

Wilson responds, “I ask myself that question all the time. If you really have some kind of message, traditional art galleries aren’t really the place to get it out. And painting occupies the same place in the art world that women do in the real world, at least in some other countries. But paint,” she pauses, considering the sensual reward of actually using the stuff, “is generous.”

If only we could all be as wide-spirited as a tube of acrylics.