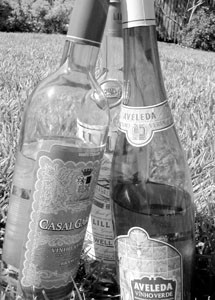 Hints Of Summer: Warm weather is nicer under the influence of a cool Vinho Verde or a refreshing Lillet.

There are more efficient ways to beat the heat then tipping back a relaxing drink–like, say, taking a dip in the pool or cranking up the AC–but what about those who don’t have a pool? Or an air conditioner? Or even a house with decent air circulation? This is when we must literally take matters–matters being cold beverages–into our own hands.

The stifling heat of summer is a marvelous time to indulge your inner lazy slob; i.e., sit around in a lawn chair and do nothing. Keep in mind, though, that a long, hard day of enjoying cool summer drinks can render you asunder faster than you might desire. To keep both the levels of fun and functionality steadily plugging along, here are some low-alcohol, high-pleasure bevies to soothe your inner thermostat.

A sticky Port is the last thing you’d want to drink on a sticky day, so turn to Portugal’s “green” wine–so-called not because it is green, but because it is meant to be drunk young. Most of the Vinho Verde exported from Portugal is white, with no vintage date. Straw-colored and gently fizzy on the tongue, Vinho Verde is a nubile wine with party potential. Acidic but easygoing, it pairs excellently with seafood and spicy foods, and is so well-suited to picnics and cookouts (e.g., grilled fish or chicken) that it seems a crime to drink it indoors. Plus, it’s cheap, as in hella cheap, as in $5 to $6 a bottle.

If you entertain often, Vinho Verde is a great wine to buy by the case. Your guests (and you) can spend a casual afternoon sipping away and not skid under the table. Looking at some old notes documenting my first encounter with Vinho Verde at a winetasting, I noticed the impressions I had carefully recorded: “Wheeee!” I did have a point, albeit a simply worded one: Vinho Verde is all about fun. Casal Garcia and Aveleda are two common Vinhos Verdes; I found three selections at Beverages & More.

Aperitifs (French for “appetizers”) are the best thing ever, and Bordeaux’s Lillet is the aperitif wine. Lillet over ice is just as swanky as a cocktail, but instead of clubbing your palate to death before you even get to dinner, it piques it up. Lillet comes in red and white variations, the red being the sweeter, spicier, and less often tasted of the two.

Sunny but sophisticated, Lillet Blanc screams out “summer!” It’s a pretty pale-gold, off-dry with a hint of orange blossom and honey. Lillet matches up well with cold summer appetizers: shrimp, crudités, little toasted things with dip (the slight sweetness and acidity cuts through brandade expertly). Serving Lillet could not be easier: a chilled glass, a few ice cubes, a twist of orange–boom! It’s also fun with club soda and a lime twist. Once, on a fluke, I even tried it with sparkling mineral water, and that was good, too.

You could easily develop the bad habit of walking around the house in cheap nylon slips, glass of Lillet in hand, pretending you’re Elizabeth Taylor in Butterfield 8. She never drank Lillet in the movie, but that can be overlooked.

Dubonnet is another French aperitif wine with both red and white variations, but lackluster Dubonnet is no Lillet, my friends! A bottle of Lillet (around $15) may be a few dollars more, but it’s a few dollars well-spent.

Is this too obvious? How come a chilly Hamm’s on a 90-degree day hits the spot about a thousand times better than a Hamm’s on a mid-January evening? Cheap beer tastes like water, water quenches our thirst, and summer makes us thirsty. That’s when a shiny, condensation-dappled can of good ol’ American lager beer feels sooo right. And, as implied in the name, it’s cheap.

I’m a big fan of Pabst Blue Ribbon. I don’t like Bud, Corona makes me sick, and Coors shares a nickname with Bob Seeger’s band. In a blind taste test, I bet I wouldn’t be able to tell the difference, but PBR me ASAP, thanks.

Once, a beer authority told me that Bavarian beer (according to the Bavarian Purity Law of 1514) contains no additives and thus will not give you a hangover, because additives are what make your head hurt the next day. He’s probably right, but that has not waylaid me from the hangover-strewn path of fine cheap American beer.

In any case, a cool cheap American beer drunk outdoors is on par with a carefully brewed fine beer drunk indoors. Fine beer outside is all right, but on a lazy day, who wants to be bothered with distractions of quality? Why waste precious great beer when you are not very likely going to put forth the effort to properly appreciate it?

How about a tasty beer and lemonade? Wait–keep reading! This English classic is greater than the sum of its parts. OK, I know mixing lemonade with beer sounds gross–and therefore typically British–but think: What could be more refreshing than to combine the two most refreshing summer beverages known to humankind? It’s sweet but not too sweet, crisp and tart, and fizzy enough to not be distracting.

The shandy has a few how-tos: first, the lemonade part needs to be good lemonade, preferably homemade. And for God’s sake, don’t even think of using Country Time.

Second, the beer: In England, they use pale or light ale. The ratio of beer to lemonade is flexible. I like 1-1, but some prefer one part beer to two parts lemonade. You’ll just have to play around and see what works for you.

An interesting bit of info: according to my friend who went to school in Scotland and married a bona fide Englishman, lemonade in England is sometimes a fizzy, lemon-flavored carbonated beverage. So versions of shandy that replace the lemonade with ginger ale are not totally out of line. I have not tried any, because I am a big fan of lemonade. I have, however, opted to fill the beer portion of my glass with Pabst Blue Ribbon (see above) instead of the requisite ale, and I like this better than the traditional shandy. In England I could be tarred and feathered for such behavior, but at least I’m trad enough to put real lemonade in my shandy rather than fizzy “lemon drink.”