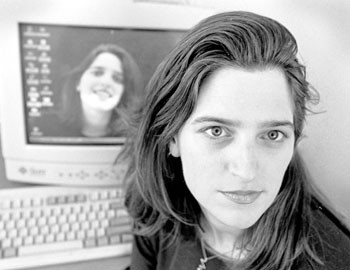 Somebody’s Watching Me: It’s not paranoia; Carli Schultz Kruse is being watched.

Free to Be Me

When technology first started invading our privacy, Americans worried about looming societal changes. If everything we say and do can be recorded and shown to others, how will we lead our lives? Will we all take on the role of saints and conform to some standardized ideal of normalcy? That idea sent chills down our collective, free-spirited spine. And so some self-preserving, intelligent, unconscious life force led the people of this great nation to create The Jerry Springer Show.

The program normalized any behavior that you and I might possibly come up with. So now when you’re in a hotel room or public restroom and you know there’s the chance you might be secretly taped, you can think to yourself, “Eh, whatever.” It’s all rather ordinary and commonplace compared to the stuff we’ve seen before. So don’t worry; do what you need to do. And remember who you have to thank for that freedom.

That’s how Jerry Springer saved life in America, as we know it.

But we’re not ones to let down our guard in the fight for liberty. So while Springer featured obvious freaks, reality TV stepped in and showed us that even those members of society who seem more average are, essentially, a bunch of weirdos as well. And the margins of what constitutes “normal” widened even more.

The newest vanguards for the preservation of America’s freedoms are folks like Carli Schultz Kruse of Mill Valley. They’re not freaks. They’re not weirdos. They’re our neighbors. And they’re reassuring proof that humans are an odd and messy lot.

Not surprisingly, Kruse isn’t even aware of her mission as a warrior; she thinks she’s just an egocentric exhibitionist.

Kruse, 29, greets me at the two-bedroom apartment she shares with her husband and cats. She shows me to the couch, asks if I’d like a glass of water, and tells me to sit down and make myself comfortable. There’s not even a hint of sarcasm in her voice as she says this.

I’m not comfortable. As I sit there, I spy the little camera pointed in my direction, taking a picture every 30 seconds. Those pictures can be viewed and downloaded by anyone who happens to be visiting Kruse’s website at www.lunesse.com. I’m not one of the warriors. If a camera is pointed at me, I sit up straight and suck in my stomach.

Kruse plops down on the couch, tucks her feet under herself, and has absolutely no intention of sitting up straight. She seems oblivious to the one-eyed intruder. Last month, Kruse celebrated the three-year anniversary of the day she pointed three webcams at her life. Two are at home, one’s at her office. They’re on all the time, following her day-to-day life: making breakfast, reading a book, talking on the phone. They cover all work and living spaces except for two private areas.

“No cameras in the bedroom or the bathroom. That’s where I draw the line,” she says. Once again, she says this in all sincerity, as if having a camera in either of these rooms is a viable option. Of course, there are people who make a lot of money doing just that. But Kruse is not that kind of girl. There’s no money or nudity involved in this little endeavor. It’s a labor of love.

Kruse is one of a growing number of online diarists who have taken the next step in exposing their inner selves via modern technology. As if it weren’t enough that they were already writing about their most intimate moments and personal desires online, now these folks are offering up peepholes as well.

The cameras are “just a natural extension” of the online diary Kruse has been keeping for the past six years, she explains. “I know when I read other people’s journals I wonder what they look like and what their house looks like and things like that. And I figured they might have the same feelings about me. So I put up the cameras.”

Kruse says that about 170 people visit her website each day. Although the webcams are an added benefit for her fans, she believes the journal is the main draw.

Unlike some of her contemporaries, Kruse doesn’t entice readers with lurid tales of hedonism by the Bay. Her journal’s strength instead lies in the fact that the entries are so universally human and touching. For example, on the day before her wedding, she wrote about her fears of intimacy and about finally falling in love. (Of course, that someone who fears intimacy would bear so much on the Internet offers a rich playground for any budding psychoanalyst.)

Kruse writes: “I’m absolutely crazy about DLJ [her groom]. I want to see a smile break across his face, have love astound him in its depth–I’m slowly still letting my guard down, and in the past few months, I’ve made big hurdles in letting the old scars show for what they are, and trust him not to pick at them. It was so hard to believe that someone could really care enough to not hurt me, to find joy and pleasure through keeping me safe and happy.”

Though she writes about the euphoria of pure love, Kruse doesn’t shy away from detailing life’s more earthy pleasures as well. She talks about waking up one morning to the delightful sensation of her lover “spooning me, and he was pressing into me, slowly moving, in short, I was being poked.” In another entry she writes: “I was once again lain on my back on my bed, towel beneath me, and treated to a fair amount of attention by DLJ, shaving cream, and a razor.”

Those types of entries are always written in purple font. “My mom and I have a system worked out,” Kruse explains. “She likes reading my diary. And I like her to; it helps us stay close. But neither of us wants her reading the parts about my sex life. So I put all those entries in purple so that she knows to skip them. Sometimes I’ll get e-mails from people complaining that there haven’t been enough purple entries for a while.”

When asked why she would sacrifice so much of her privacy for no tangible reward, Kruse replies, “I don’t really know why I do it.”

The fact that Kruse isn’t completely aware of her motivations isn’t for lack of trying. She tries and tries to understand her intentions, her emotions, her thoughts, her ambitions, her life. And all this introspection finds a place in her journal. “I’m sure that anyone who spends that much time thinking about themselves must be at least a bit of an exhibitionist–and somewhat egocentric,” she muses.

But Kruse’s site isn’t some narcissistic shrine. She doesn’t try to come off as a sex goddess or a genius or a saint. Instead, her goal is to expose her true self–scars and warts and all–as honestly and openly as possible. There are still some parts of herself she keeps private and hidden, but she admires the online diarists who are able to be more revealing. They’re using technology to make all the varied nuances of humanity rather ordinary and commonplace.

Who knows, maybe by the time technology completely invades our privacy and there’s nowhere left to hide, we won’t be frightened into conforming into some standardized ideal. Maybe by then, when we catch a glimpse of Big Brother staring at us, we’ll just think to ourselves, “Eh, whatever.”