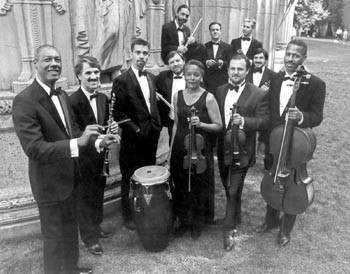 ART, LIKE LOVE, conquers all. It skips lightly over national borders, bridging the gaping holes in cultural understanding left by mere verbal communication. Indeed, as an international language, art seems to have almost cornered the market: How many more people around the globe recognize a Van Gogh or a Warhol than speak one word of Esperanto? Art just might be our only global cultural currency.

Or so we like to think. But the course of art doesn’t always run so smoothly. What happens when something blocks the path of cross-cultural communication–something like the formidable political bulk of Jesse Helms and a big bundle of embargo laws? Point the finger at the intransigent senator from North Carolina or blame that stubborn bearded fellow in Havana, but either way, we don’t often get a chance to see much art from Cuba.

That will change if Joel Bennett has his way. The Forestville artist is the organizing force behind “Beyond Barriers: From Cuba with Love,” a new exhibit opening Oct. 9 at the SoFo2 Gallery in Santa Rosa. The show includes artwork by five printmakers and six ceramists affiliated with a cultural center in Santiago, as well as a mixed-media piece by Bennett himself, who works primarily in ceramics. The exhibit even has a musical component: a performance on Oct. 11 by Orquesta La Moderna Tradición, a Bay Area Cuban dance band.

All told, “Beyond Barriers” might be the best chance many folks in Sonoma County have ever had to see a substantial amount of Cuban art.

“That’s why I’m really excited at the chance to have the exhibit here,” Bennett says. “I think it offers a good cross section of styles that demonstrates the blending of African and European heritage that’s so important in the country.”

Still, Bennett makes no bones about the fact that he wants “Beyond Barriers” to do more than simply introduce people to Cuban art. He speaks with earnest intensity about his desire to educate people about the U.S. laws that have restricted travel to and commerce with Cuba for decades.

“The idea for the show really came about from my desire to express my political feelings about the embargo,” he says. “After making trips to Cuba and really seeing what the embargo is doing to the island, the terrible impact it’s having, I wanted to come back and share my feelings with an art piece.”

But is Sonoma County ready to discuss this touchy subject, which elsewhere has been known to set off firestorms of debate? Barbara Thoulion, curator of the SoFo2 Gallery, says she believes the time is right.

“I think there is a growing interest among both Americans and Cubans in repairing our relationship,” Thoulion says. “Here we have this incredibly close neighbor with this rich artistic history. I think it would be foolish of the United States not to try to understand Cuba better.”

Still, “Beyond Barriers” has already aroused a bit of controversy, according to Thoulion.

“When we presented the idea to our board, they said, ‘We don’t want to have pickets out in front of the museum, so don’t make this whole show about politics. Let’s make the show about the art and not politics,'” she recalls. “I think we’ve made it a marriage of the two.”

For his part, Bennett thinks it’s unlikely that anyone will be angered by the show.

“I haven’t thought much about it,” he says. “My feeling is that, in this country in general, people would like to see things change in Cuba, and I think there is a large portion of the Cuban American population that doesn’t support the embargo. … It’s really hurting the Cuban people.”

Bennett’s strong views on the embargo spring from his own experiences on the island, which began with a trip he took to Cuba four years ago.

“I’d been reading about changes that had been happening there since the collapse of the Soviet Union, and I wanted to really see Cuba before it changed,” Bennett says. “My second visit was really with the idea of researching what’s going on there in ceramics.”

After his trip, Bennett penned an article for Ceramics Monthly about his experiences, whimsically titled, “Rum, Salsa, and the Clay Experience.” The artist has returned several times, building a close relationship with artists at the El Taller Cultural, a government supported art center in Santiago. Bennett even introduced local artists to pit firing.

“They were really intrigued by that,” he remembers. “They’d never seen that type of firing and the kind of work I did, so I led a whole experience in burnishing and pit firing on a beach outside the city.”

In turn, Bennett was impressed by the Cuban art scene, which he says is flourishing despite economic hardships. That’s thanks in part to the Cuban government’s financial support for the arts, which Bennett calls “amazing” in light of the country’s troubled economy. But Cuban artists are also increasingly supported by tourist money, which is a double-edged sword.

“Actually, for visual artists, it’s a good time, because the Cuban economy now is really based on tourism,” Bennett says. “Anybody who can tap into that is going to do pretty well, because they’re earning dollars. … But the change in the work, especially with the ceramic artists, is that they are producing many more small pieces that can be easily carried by tourists.”

On the whole, however, Bennett thinks the growing global appetite for Cuban art is positive. That’s why he was so pleased when artists at the Taller Cultural first suggested to Bennett that he bring back artwork from the center for “Beyond Barriers.” It wasn’t easy, but he did just that, hand-carrying all the pieces, since shipping is outrageously expensive. But transporting the art was child’s play compared to Bennett’s attempt to invite two Cuban artists to Sonoma County for the exhibit, given the daunting maze of bureaucracy involved.

Perhaps it’s a sign of the growing international appreciation for Cuban art that, in the end, the two invited artists could not make it to the United States, for reasons that apparently had more to do with their busy travel schedules than any roadblocks thrown up by either the Cuban government or our own State Department.

“It had nothing to do with the U.S. government,” Bennett says. “We didn’t even get to the point of applying for a visa.”

But the show will go on, complete with art, music, and gallery talks by Tony White, an SSU professor of Latin American history, and by Bennett himself. All this, Bennett hopes, will help focus attention back on the Cuban embargo. But is there really much hope for renewed discussion about our relationship with our Caribbean neighbor?

“It’s hard to say, with things the way they are in Washington right now,” Bennett says. “Maybe once this election period is over, we’ll get back to focusing on the issues. Maybe then we can discuss the embargo.”

“Beyond Barriers: From Cuba with Love” runs from Oct. 9 to Nov. 15 at the SoFo2 Gallery, 602 Wilson St., Santa Rosa. A reception on Oct. 11, from 3 to 5 p.m., will be followed by a dance featuring Orquesta La Moderna Tradición, at New College of California, 99 Sixth St., Santa Rosa. Two gallery talks are scheduled: SSU professor Tony White will speak on Oct. 14, and Joel Bennett on Oct. 21. Both events start at 7:30 p.m. Normal viewing hours are Monday through Friday, 12 to 5 p.m. 579-ARTS.