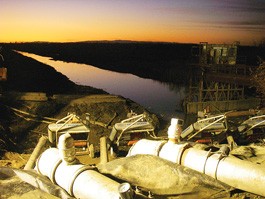 Feinstein's Delta-pumping plan may cost the state its salmon

The future of the state’s Chinook salmon and the ancillary fishing industry grew grimmer this month when Sen. Dianne Feinstein announced intentions to increase water exports from the Sacramento-San Joaquin River Delta to farmers in the San Joaquin Valley.

The proposal to develop the “Emergency Temporary Water Supply amendment,” as Feinstein called it in a Feb. 11 press release, would reverse a federal restoration plan enacted in 2009 that called for a reduction in Delta water exports during the spring months as a preservation measure supporting endangered winter-run Chinook salmon and Delta smelt. Feinstein announced her plan on the same day that the federal government reported 2009’s fall run of Chinook salmon—39,000 fish—to be the lowest ever recorded, a crash that environmentalists blame on mismanaged water exports via two large pumping facilities near Tracy.

Now, critics say, should the federal restrictions on springtime pumping be lifted by Feinstein’s actions, many or most of the tiny offspring from 2009’s meager return—already in the Delta as they move toward the sea—could be lost, and with it, the state’s salmon fishery. They charge that Feinstein has been influenced by wealthy corporate farmer Stewart Resnick, who owns Paramount Farms near Fresno.

Resnick has contributed $29,000 in campaign money to Feinstein and is reported to be a personal friend. Late last year, he called on her to enact a formal review of the federal smelt and salmon restoration plans, which had been designed over several years by the Fish and Wildlife Service and the National Marine Fisheries Service. Feinstein did so promptly, and in January a public hearing took place in Davis where expert witnesses testified against reduced pumping before a panel from the National Academy of Sciences.

To opponents of boosted water exports, it appears that the senator’s new efforts to lift the pumping restrictions are a separate maneuver toward the same goal.

“She certainly seems to be responding to those campaign contributions from Resnick and Westlands Water District, and now she seems 100 percent dedicated to her idea that farm jobs are more important than fishing jobs,” charges Dick Pool, program manager for Water4Fish, a conservation organization in Concord.

Feinstein’s office deflected requests for a quote from the senator, instead sending canned press releases to the media. In a Feb. 11 release, Feinstein is quoted as saying, “The San Joaquin Valley is experiencing an unprecedented economic crisis, a situation so grave it was termed ‘catastrophic’ by a federal judge.

“The unemployment rate is 40 percent in some Valley towns, and people are standing in bread lines. I believe we need a fair compromise that will respect the Endangered Species Act while recognizing the fact that people in California’s breadbasket face complete economic ruin without help.”

Tina Swanson, executive director of the Bay Institute in Novato, calls Feinstein’s proposal a “poor approach” to solving a water crisis caused at its root by over-allocation of the Delta’s limited supply of water.

A study conducted by Southwick Associates, a Florida-based company that analyzes economic matters related to fish and wildlife, found that California’s ongoing salmon fishing closure, which began in 2008, has cost 23,000 jobs. Roger Thomas, captain of the Salty Lady, a sport-fishing vessel in Sausalito, says these include vessel captains, deckhands, fish processors and members of the hospitality trade.

“The economy on the coast has gone down the toilet because of the salmon disaster,” Thomas says. “The harbor at Bodega Bay is like a ghost town.”

But the jobless rate is sky-high in the San Joaquin Valley, too. In her Feb. 11 statement, Feinstein said she hopes to alleviate unemployment in farming towns like Mendota, Huron and San Joaquin, each suffering from above-average jobless rates.

Other sources, however, attribute much of the San Joaquin Valley’s unemployment to collapse of the building industry. An August 2009 report released by the University of the Pacific states that the subprime mortgage crisis cost the San Joaquin Valley 47,000 construction jobs, while water cuts and drought have led to 8,500 farm-related jobs lost.

But for farmers like Joe Del Bosque, the crisis is real in the San Joaquin Valley. Del Bosque, a cantaloupe farmer in Los Banos, believes the unemployment is a direct result of hundreds of thousands of acres that have gone fallow due, he says, to unnecessary water cuts. Del Bosque, who holds lower priority water rights than some other farmers and urban water agencies, has had to fallow half of his own 1,200 acres after the federal government imposed restrictions last year.

Although Del Bosque and others say that they are not receiving the water they need, net water exports from the Delta have increased substantially and steadily in the past two decades, according to figures from the Department of Water Resources. From 1990 to 2007, average annual water pumping rates in the Delta escalated from 4.9 million to 6.2 million acre feet.

Records also show a strong negative correlation between these increased pumping rates and adult salmon abundance in the Sacramento River three years later, a lag time that reflects the average span that Chinook salmon spend in the ocean between the time they leave and reenter the rivers of their birth. In 1999, a relatively low volume of 5 million acre feet was drawn from the Delta via the Tracy pumps.

Three years later, in 2002, the Sacramento saw its largest fall Chinook salmon run ever recorded—almost 770,000 fish. But beginning in 2001, Delta water exports began to rise rapidly. By 2003, the pumps were drawing 6.2 million acre feet per year, an unprecedented volume that held steady through 2006. This abrupt boost of 20 percent was followed almost exactly three years after it began by the current Chinook salmon freefall, which started roughly in 2004.

Dr. Peter Moyle, a fisheries biologist at UC Davis, says the months of February through May are crucial to the survival of the Sacramento River’s Chinook salmon runs. Moyle says that finger-sized juveniles, called smolts, born between October and December, swim through the Delta in the spring on their outmigration to the ocean and are potentially threatened by the pumps.

“The Stockton pumps reverse the water flow direction in the Delta,” Moyle explains. “This confuses these little fish that are trying get to the ocean.”

The smolts may swim directly into the pumps, meeting a certain death. Countless others are eaten first by predatory fish that occupy the Delta’s sloughs and backwaters.

While Feinstein promised in a Feb. 18 release that “we are exploring every possible option to achieve the water flexibility that would make this legislation unnecessary,” few critics are calmed.

“If Feinstein undoes that biological opinion, we’re likely see the extinction of one of our salmon runs,” Pool says, citing the stat that 85 percent of the juvenile salmon that exit the Sacramento for the ocean do so in the spring. “We had only 39,000 fish spawn in the fall, and now almost all their offspring are trying to get through the Delta.” High fish mortality rates this spring could mean another poor return of fall run of salmon in 2013, he adds.

Del Bosque and hundreds of other farmers in the San Joaquin Valley, however, depend on a flow of Delta water all winter and spring to fill the San Luis Reservoir, their major summertime water source.

“Imagine trying to fill a swimming pool with a garden hose,” Del Bosque says. “We need that water flowing now and for the next six months.”

Further endangering the Delta’s fisheries, say Swanson, Moyle, Pool and others, is the prospect of building a canal that would draw water from the northern Delta and transport it to Southern California. The proposed conveyance system could be especially damaging if combined with the current exports via the Tracy pumps, Moyle says, and could extinguish the Sacramento River’s Chinook salmon, striped bass and other fish. The money to build the canal is included in an $11 billion water bond package that will go to the ballot in November.

Barbara Barrigan-Parrilla, executive director of Restore the Delta, a conservation group in Stockton, believes money, not science, is steering the direction of current policy making in Sacramento.

“When you put together [Stewart] Resnick and Westlands Water District and the money they give to campaigns, I believe it leads to real corruption in the process,” she says. “They’re either buying influence through lobbying or by making political campaign contributions.”

Skipper Roger Thomas, who is currently negotiating with lawmakers to come to a compromise that would hopefully save salmon and minimize farmland impacts, would only say, “This is big-money politics.”