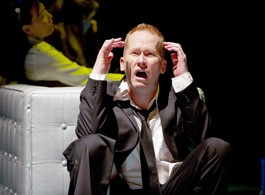 The organizers of the Oregon Shakespeare festival, in Ashland, Ore., have always seen the annual event as a kind of theatrical kaleidoscope, a way to examine the world through multiple colored lenses. Some years, of course, the line-up of plays seems even more kaleidoscope-y than other years, which is certainly the case for 2010, the festival’s 75th consecutive year in operation. When it is up to full speed in the summer, with all three theaters in operation, there will be an original world premiere of a play about Latino-American history, a stage adaptation of the classic Japanese film Throne of Blood, a long-forgotten musical by the creators of Fiddler on the Roof—and even some actual Shakespeare, including outdoor performances of the first two plays staged in Ashland back in 1935 (‘Twelfth Night’ and ‘The Merchant of Venice’).

For now, let’s consider the four very different shows that opened the festival last weekend, Feb. 27-28, an eclectic quartet of plays which fully demonstrate the OSF commitment to something-for-everybody programming, fueled by strong desire to please vast groups of theatergoers while being entirely willing to challenge and/or alienate others.

First, let’s consider the opening night show, the one everyone is sure to be talking about until it closes in late October, William Shakespeare’s moody masterpiece, ‘Hamlet.’ Directed by OSF’s artistic director Bill Rauch as a modern-dress rollercoaster of madness and mayhem, the production is anchored by an unsettling, electrifying performance by Dan Donahue. Though purists will find themselves tangled in knots of irritation by this sneakers-and-jeans, guns-and-scissors staging, the overall production accomplishes something that most Hamlets, even the very good ones, fail to do—it makes sense.

Let’s face it, as written, Hamlet can be incredibly confusing. Hamlet, the character, seems to be pretending to be crazy, all so he can ferret out the mystery of who actually murdered his dad, but then when he starts killing people and spurning innocent women, it’s hard to think of him as sane anymore—or continue to root for him. Actually, as the play is constructed, people seem to lose their sanity at the drop of a hat, and major emotional breakthroughs are wiped away in the very next scene, with characters who just experienced major epiphanies suddenly acting as if they’d rebooted their personalities back to the beginning of the play.

In the OSF production, all of these problems have been cleverly solved, usually through very specific acting choices, and the result is a Hamlet that is breathtakingly exciting, heartbreaking, and consistently bold. As Hamlet, Donahue is riveting from the first scene. Actually, he’s interesting even before the first scene, due to Rauch’s decision to stage the funeral of Hamlet’s father as the audience is entering the theater to take their seats, Hamlet sitting in white-knuckled silence as his fellow mourners gradually drift away, the candles snuffed, the chairs removed. This, clearly, is a Hamlet whose soul is shattered from the very beginning, and it is one of the play’s more daring suggestions; Hamlet is crazy from scene one, and what follows is the rapid infection of the other characters, everyone eventually contaminated with the same insanity that plagues the Prince. As Ophelia, Susannah Flood makes her connection to her father palpable, and her frail, girlish infatuation with Hamlet clear, cleverly setting up Ophelia’s eventual mental disintegration as she becomes torn between two great loves. Also strong are Greta Oglesby and Jeffrey King as Gertrude, Hamlet’s mother, and Claudius, Hamlet’s murderous uncle and brand-new step-dad. Even the usually perfunctory character of Horatio, here played by the great Armando Duran, and the also-ran Rosencratnz and Guldenstern—played as a social-climbing lesbian couple by Vilma Silva and Jeany Park—become powerfully strong characters.

The whole production is packed with inventive, outrageously daring ideas: a deaf, sign-language-employing ghost (played by New York’s amazing deaf actor Howie Seago); a troupe of hip-hop players, rapping the play-within-a-play; Ophelia going uncomfortably undercover, wearing a wire into her confrontation with Hamlet. Obviously, this won’t be everyone’s cup of Earl Gray, but for anyone eager to see Hamlet for the first time—whether they’ve seen it before or not—this brilliant production will more than do the trick.

Even better is Christopher Liam Moore’s jaw-dropping staging of Tennessee Williams ‘Cat on a Hot Tin Roof.’ My personal favorite of the current offerings, this Cat revolves around heart-shredding performances by Stephanie Beatriz as Maggie, Danforth Comins as Brick, and Michael Winters as Big Daddy. Never an easy show to pull off, Williams’ Pulitzer-winning drama demands exceptional performances to avoid devolving into an anguished mess, and under Moore’s steady direction, this production does much more than avoid falling into traps; it transcends itself, embracing the most problematic aspects of each character, and ultimately embracing Williams’ startlingly frank humanity in ways that most productions barely flirt with.

All taking place on one long night, as a wealthy Mississippi family comes together to celebrate Big Daddy’s 65th birthday, everyone aware but him that he has terminal cancer, Williams masterpiece must be perfectly paced to work. Moore achieves this, and much more, by casting actors capable of making us like them and hate them at the same time.

Christopher Acebo’s inventive set dispenses with the usual wallpapered walls and open windows, presenting instead a kind of half-cocoon of sheer curtains, behind which the various conspiring family members hover and move about, better emphasizing the eavesdropping claustrophobia within which the troubled Brick and Maggie clash.

Two of the most difficult characters to play in all of Williams’ canon, Brick (drinking himself to death for unspoken “crimes”) and Maggie (using every seductive trick in her book to save her marriage and her financial security) must be played with perfect balance, and Beatriz and Comins pull it off, making us care about them, and hope for them to finally come together again.

Wit fine supporting performances by Catherine E. Coulson as Big Mama, Rex Young as the duplicitous Gooper, and Kate Mulligan as the desperate Southern Belle Mae, the escalating drama is excruciatingly thrilling, the climax both powerful, satisfying, and beautifully simple, Without question, this is a Cat worth driving 200 miles for.

The same can’t be said for ‘Pride and Prejudice,’ Libby Appel’s bland staging of Jane Austen’s beloved comedy of manners. With a Cliff’s Notes script by J.R. Sullivan and Joseph Hanreddy, the production is perfectly pleasant, and quite pretty (kudos to Mara Blumenfeld’s lovely costumes) but the whole exercise is disappointingly flat.

The elements of the story are familiar. Mr. Bennet (Mark Murphey), has five daughters and no sons. Law requires that property be handed down only to male relatives, so the Bennet girls’ only hope of avoiding eventual poverty is to marry a wealthy suitor. When Elizabeth (Kate Hurster) becomes involved in a passive-aggressive flirtation with the handsome-but-haughty Mr. Darcy (Elijah Alexander), the stage is set for a series of culture-clashing bumps and potholes on the way to true love.

For all the prettiness of the production, sadly, this love story is no more affecting or captivating than watching a series of paper dolls be moved clunkily around the carpet.

Lisa (played by Terri McMahon), is a playwright-actress who, in the opening moments of the show, informs us that we are about to experience a “theatrical exploration” of illness and wellness, and that the woman sleeping in the Laz-Y-Boy chair upstage is here mother, Ann, brought to the theater as an example of illness. Ann (Dee Maaske) is not thrilled to find herself the focus of so much attention, but graciously offers to find drinks for the audience in her kitchen. As Lisa refers to note cards, she brings in a foursome of performers to act out certain scenes from her life, primarily a bizarre stint in a New York allergy clinic—Lisa was once the victim of the same kind of “allergies” that have left her mother incapacitated her entire life—and the short time when Ann galvanized her interracial community to keep from falling apart.

The problem is that Ann doesn’t remember things the way Lisa does, and as the hired actors attempt to play out various scenes of “water tests” and community meetings, they find Ann a more charming and credible witness than the playwright who hired them.

It’s all very weird, but never boring, even when a tiff between mother and daughter leaves Ann sleeping in the chair and Lisa angrily reading a magazine—as nothing else happens on stage. This results in the other actors panicking (“This is some sort of fucked-up New York bullshit,” one of them says), until something traditional starts happening again.That said, there is nothing traditional about Well.

Not only does the one-act play effectively explore issues of illness and health (primarily asking why some people can make themselves well, while others remain ill), Kron’s crafty exercise also deconstructs our basic expectations of theater.

For information about the OSF’s full season, visit orshakes.org.