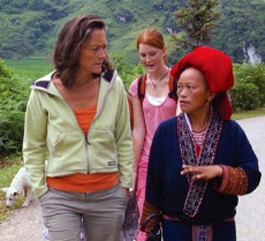 Stephanie Guyer-Stevens has her eye to the telescope. Guyer-Stevens runs Outer Voices, a nonprofit organization based in Healdsburg that reaches as far as the Pacific Islands to make sure that stories of social change are heard and that a digital soapbox is given to activists who would otherwise be left unacknowledged. Outer Voices uses epic radio documentaries to directly source women as “the first line of information in situations of conflict.” While world issues are often left reviewed on a narrow spectrum, Outer Voices’ documentaries can be found on an array of topics from ending military dictatorship on the Thai-Burma border and the sex industry in Cambodia to developing sustainable agriculture in Vietnam and rebuilding in the aftermath of civil war in Bougainville.

Originally, Guyer-Stevens intended her work for print, but realized—with the help of a radio-savvy college friend—that “radio reaches everyone.” Since 2003, Guyer-Stevens, working with a small team of two to four others at any given time, has created six five-hour-long documentaries. “I’m really interested in covering what nonviolent social change is,” she explains. “I want to show women as leaders, not just for their own cause, but just really how they lead. I want to see feminism reinvented. Women are not a special-interest group.”

With her documentary series wrapped, Guyer-Stevens continues to push for change. This month, Outer Voices travels to the United Nations for the Commission on the Status of Women. Outer Voices is collaborating with San Francisco State University to create a communications program that, Guyer-Stevens says, “will teach students our style of journalism: how to use women as spokespeople, especially in situations of conflict. And what the challenges and repercussions of that can be. And the benefits, too. A lot of young women have big decisions to make on their relationship to feminism. There’s stigma. ‘Feminism’ has become the F-word. I’d like to see that change.” www.outervoices.org.

Next ArticleAcross the Bridge: Mar. 3-10