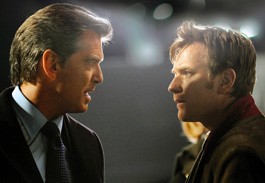 The setting of Roman Polanski’s freezer-burned comedy/thriller The Ghost Writer is a brutal concrete bunker. Here, several people are trapped under constant surveillance beneath cold and stormy skies.

The bunker is beachfront property on a thinly disguised version of Martha’s Vineyard, and it must have cost at least $15 million, but this only adds to the general angst.

A former British prime minister Adam Lang (Pierce Brosnan) has settled in this spot to finish up his memoirs. Robert Harris’ very witty script, not quite up to its promise on paper, has it that the PM got a $10 million advance for an absolutely unpublishable book. It’s reams of boredom about Lang’s Scottish roots, the queen’s little-known sense of humor and his modest hopes for a better world.

Unfortunately, the PM’s last ghost writer met with an accident. So his swine of a publisher (a shaven-headed Jim Belushi) assigns a new hired hand, known as the Ghost (Ewan McGregor), to come in and finish the text.

Troubles are compounded. As soon as the Ghost arrives at this fascist pillbox of a beach house, Lang is subpoenaed by The Hague to discuss his participation in the extraordinary rendition plan, which ended with the death under torture of a British citizen. Meanwhile, the PM’s sexy shrew of a wife, Ruth (Olivia Williams), noses out her husband’s affair with his assistant Amelia (Kim Cattrall).

One admires how much Polanski got out of two TV hobgoblins like Cattrall and Belushi. Cattrall’s tightly packed curves are less important to this film that her mastiff-like jawline. Williams does the older-woman role proud against McGregor, who seems to have been 25 for a decade.

The surprise in this plot is revealed through some expertly played Boston Brahmin threat by Tom Wilkinson. His scenes are full of promise; one waits in vain for the really sweeping moment, like the instance of Philip Ober, seemingly struck dead by the sight of a photograph in North by Northwest.

The Ghost Writer has merit as an easily read satire of Tony Blair. Like most world leaders, Blair looked like a man of greater stature across his national borders. He never receives the ignominy he deserves here—not only for rolling over like a spaniel for Dubya, but also for some tremulously goofy New Ageisms. (Reportedly, he and his wife were rebirthed in a Mayan sweat lodge. Not to unduly mock the New Agers, but a British PM ought to have a little more faith in the material world.)

Brosnan—who has an odd, slightly mincing accent here, and is rationed out in too-small doses—proves his excellence at playing privileged weaklings. Anyone who still considers him this year’s Richard Chamberlain (that is, anyone who didn’t see him in The Tailor of Panama or Matador) will learn how good Brosnan is getting.

The Ghost Writer is a typical old director’s movie: slow, morbid, never quite sexy enough and full of self-reference. Compare the word-play scene in which the secret is revealed with the Scrabble scene in Rosemary’s Baby.

It’ll look much better on TV. Trapping us in the house is a classic Polanski maneuver, but leaving us there is something like an act of forgetfulness. Both the Ghost’s serious naiveté and the way he’s dealt with leach more pleasure and juice from this paranoid tale.