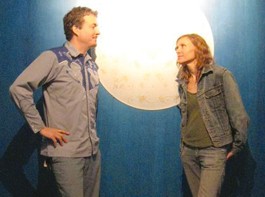 The origin of Hymn for Her sounds like something out of a fairy tale. Two musicians travel to an inn by the sea, intent on writing a book. A kindly innkeeper provides free room and board in exchange for songs played to the dinner crowd. And while the magical two weeks doesn’t end in a book, it does produce one baby and an album of sweet folk Americana.

Now, Maggi Jane and Pierce Ternay—once a member of the early ’90s hip-hop group the Goats—spend their days touring and performing tunes from their 2008 release, Year of the Golden Pig, to crowds across the country. It’s a family affair since their two-year old daughter, Diver, and dog, Pokey, are along for the ride. “We call it stompgrass music,” says Jane, on the phone from Los Angeles. “We thought that was so original until we looked it up on the internet and saw that it was a style of music already.”

But rather than being derivative, Hymn for Her might just be at the forefront of a musical movement that’s not content with playing straightforward bluegrass or folk. During live performances, the duo plays in a dynamic fashion, switching between different instruments while sharing one microphone. “We have a bass drum and a hi-hat that we play with lots of different acoustic instruments,” Jane says. Ukulele, banjo and glockenspiel are all featured during a typical set. “Once in a while we’ll pull out this thing called a Lowebow,” she adds. “Our friend John Lowe in Memphis makes them. It’s like a cigar-box guitar. We have to practice a couple songs on it. Maybe we will be using it.”

Not content with the normal drive-play-eat-drive rut of the typical touring band, Jane and Ternay are using breaks in the tour to record their second album. This creative solution is no surprise from a band that once walked an entire 218 miles from Philly to D.C., playing shows along the way. (“Screw the Van,” a 17-minute documentary, documents the band’s Whole Steps Towards Peace tour.) “We’re recording in people’s houses wherever we stay. We have three or four tracks already,” Jane says. And following the tradition of countless American families on the go, Jane says they are searching currently on the hunt for an Airstream trailer—but not solely for comfort and style. “We wanted to record in the Airstream while we travel because they have a good sound inside,” Jane says with a laugh.