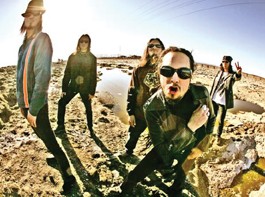 In the late ’80s, when thrash legends Death Angel were still teenagers from Concord, they reminded me to pay attention to heavy metal. Earlier that decade, college courses in jazz and classical music diverted me from the hard rock I loved in the ’70s, and outside class, I was busy following punk and hip-hop, almost missing cool post-classic, pre-thrash bands like Iron Maiden and Motorhead. Death Angel’s 1987 speed-metal debut The Ultra-Violence, along with discs by Metallica and Megadeth, slapped me with a wake-up call to a new wave of metal. “Bay Area thrash,” as the style came to be known, was the apex of metal’s dynamic new sound—hyperspeedy and brittle, manic and pummeling, balancing apocalyptic lyrics with energetic, catchy and complex music.

While on tour supporting their acclaimed third disc Act III in 1990, the band suffered a bus accident that led to an untimely breakup. I never saw Death Angel live, but a few years later I caught the Organization, the first and best of the various band members’ post-DA projects. The Organization (just DA, minus singer Mark Osegueda) packed a sweaty Railroad Square gig at the old Santa Rosa rock club Magnolia’s, blasting the club-goers with a sound mutated from DA’s pure thrash into a charged hybrid of classic and alt-rock.

Like music clubs, the heavy music scene changes. Since the heyday of thrash, metal has passed through grunge, rap-rock and all sorts of avant-rock noise. When Death Angel (who reformed in 2001 for a benefit and have since released two discs) return to Railroad Square this Saturday—their last local gig before a two-month tour of Europe—they’re veterans facing two local acts who reflect both the old and the new. Seeds of Hate maintain the brooding, seething crunch of classic thrash. Cage the Rage cover recent metal acts, bringing funk and abstract guitar sonics from the late ’90s rap-rock era. Death Angel sticks to classic thrash on their latest disc Killing Season. “Sonic Beatdown” and “Carnival Justice” sound as peppy and gruff as when thrash was new, while cuts like “Resurrection Machine” work with trickier hook writing. The scene may have changed in the past two decades, but Death Angel’s rebirth is a reminder that you can still return to what you dig.