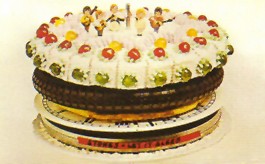 Where are all the great rock songs about food?

Every issue of Bon Appétit magazine has a list of songs or CDs to play during your fashionable little tapas party or cocktail get-together. It’s in the spirit of fun, but the suggested music always has more to do with coming across as clever or trendy than with, well, food. Or, for that matter, music.

That makes sense. You can’t play music that’s too intense or awesome when your guests are nibbling on frenched lamp chops with mint-cilantro pesto, because great music demands all of your attention. Perhaps that’s because there are precious few rock songs about eating or cooking.

Actually, the role of food in pop music is symbolic. Food stands in for lust, humor, wealth, tradition, corruption, family togetherness and good old-fashioned fun. But rarely are food-related lyrics merely about how tasty food can be.

Movies, art, love affairs, politics and great literature all inspire bands to write songs. Why not a once-in-a-lifetime perfect slice of pizza? Or a multicourse festival of top-notch gluttony at the French Laundry? What about the pancakes your dad made once a month on Saturdays when you were a kid?

There are lots of songs that mention food, sure, but they’re not about food. The B-52’s “Quiche Lorraine” is not about the iconic bacon-laced French egg tart, but a runaway poodle. “Mother Popcorn” is not about James Brown’s favorite buttery movie-theater snack.

Evidence exists that rockers like food. “Joanna Newsom ate here the other night,” my friend who works as a chef at a trendy—and expensive—Chicago cafe informed me. Kara Zuaro’s cookbook I Like Food, Food Tastes Good, which came out earlier this year, collects recipes from dozens of indie rocker types, the sort of folks who spend a great deal of time eating grease-laden bar food served at the venue they happen to be playing that night. But Zuaro’s contributors offer dishes that are hardly tour food; see current critics’ darlings Battles’ preparation of roasted marrow bones accompanied with crisped duck fat, hearth-baked bread and fleur de sel.

And yet we have no influential food-centered concept albums or Billboard smash hits about Taylor’s Automatic Refresher. Is food not arty enough, or is arty food too pretentious to fit nicely into the sweaty confines of an unbridled rock song? Think about the often contrived wankery of molecular gastronomy—sea urchin foams and gelatinized pork belly extracts—then think about how much the last Oneida album jammed. Nope, doesn’t click at all, though the nuance and mastery of great cuisine and fine musicianship come from the same overdriven, obsessed nerve center.

In all but the most stoic of restaurant kitchens, a battered boom box, caked with a sticky film of vaporized grease, is the heart and soul of the kitchen, the electric coxswain that dictates a steady rhythm in an otherwise frantic zone, where the nightly battle is chef vs. time.

Cooking and rocking out go together hand-in hand. But eating and rocking out? Not so much. Rock is the fast food of the music world: 100 percent American in origin, instantly gratifying, available anywhere. But there has to be a bona fide culinary rock song out there somewhere.

Country, being the suffering-fixated genre that it is, tends to lament the scarcity of food rather than celebrate its presence, as with Little Jimmy Dickens’ 1957 “Take an Old Cold Tater and Wait,” whose main story arc concerns getting only the neck and feet from a shared chicken. Dolly Parton, a woman who came from humble means, wrote about the hunger of her youth in her autobiographical “In the Good Old Days (When Times Were Bad),” a song in which hard labor still does not ensure adequate nourishment: “We’ve gone to bed hungry many nights in the past / In the good old days when times were bad.”

Merle Haggard later added a verse in his own version of the song: “And I’ve walked many miles to an old country school / With my lunch in the bib of my overalls.” That’s not a very big lunch.

In blues and soul, food can likewise be indicative of class. What does Annie of Tony Joe White’s “Poke Salad Annie” eat? Pokeweed, a wild plant whose toxic leaves must be boiled prior to ingesting. She was so poor that “that’s about all they had to eat, but they did all right.”

Hip-hop, a genre that rarely shies away from an opportunity to rhapsodize over decadence and physical pleasure, has been the most fertile genre for the celebration of food in song. If something tastes good, your friendly neighborhood MC is gonna say so, as with Sir Mix-a-Lot in “Buttermilk Biscuits”: “Don’t make a difference what food you make / Use buttermilk biscuits to clean your plate.”

And, of course, food is symbolic of sex. In Paul Revere & the Raiders’ 1967 hit “Hungry” (penned by Barry Mann and Cynthia Weil), it’s not a bacon double cheeseburger Mark Lindsay is singing about. Nope, he’s “Hungry for that sweet life, baby / With a real fine girl like you.”

The Pixies’ “Cactus” presents a much sloppier metaphor, in which a lovesick and homesick Black Francis requests his faraway paramour to send him her food-stained dress: “So spill your breakfast and drip your wine / Just wear that dress when you dine.” Suzanne Vega’s “Caramel,” as wistful and resigned as a sigh, smoothly longs after the unattainable, be it burnt sugar or acknowledgement from her beloved.

Food, particularly the multicultural street food of L.A., crops up not infrequently in Beck’s songs, as both a reflection on the delirious muddle of class and ethnicity in Southern California and as mechanism for painting offbeat images of postmodern American pop flotsam. The near-apocalyptic opus “Satan Gave Me a Taco” (“The chicken was all raw and the grease was mighty thick”) is at once about gluttony, starvation and indifference—after all, Beck still accepts the repulsive taco Satan offers him (“There was aphids on the lettuce, and I ate every one / And after I was done, the salsa melted off my tongue).

The Rolling Stones’ “Mother’s Little Helper” is equally horrific but more realistic, an indictment of the cardboard cuisine set out by the medicated housewife in the song: “So she buys an instant cake, and she burns her frozen steak / And goes running for the shelter of her mother’s little helper.” Props to Mick for the insight, but I doubt he’s ever had to face the crushing monotony of feeding an indifferent, finicky family day after day.

“Savoy Truffle,” written by George Harrison, is perhaps the most rollicking of food rock songs. Supposedly, Harrison wrote it as a nod to his friend Eric Clapton’s chocolate fixation, and the verses tick off a list of sticky-sweet bon-bon fillings, ending of course with “But you’ll have to have them all pulled out / After the Savoy truffle.”

“Them” is your teeth, which will rot away after too many candies; the fictional food of song still has potent drawbacks. Primary among them are that there’s not enough of it, guaranteeing that Bon Appétit play lists will remain mediocre for the indefinite future.