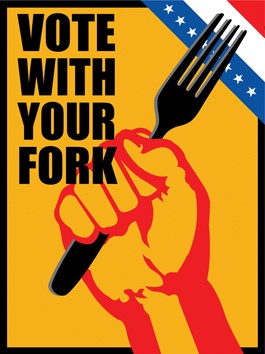 With the massive 2007 Farm Bill stalled in the Senate, the citizenry still has a chance to help put 'culture' back in 'agriculture'

The average concerned citizen would have to be out of his or her mind not to be outraged by the Farm Bill being considered this month by the Senate and its sister legislation passed in late July by the House. Our paid representatives actually spent over a year crafting their plan to guide our food and farm sectors for the next five years. The probable outcome, if and when the Senate ever gets around to finalizing a bill: another multibillion dollar agribusiness welfare package wrapped in a veneer of reform.

Originally conceived as an emergency bailout for millions of farmers and unemployed during the dark times of the Dust Bowl and Great Depression, the Farm Bill has snowballed into one of the most—if not the most—significant force affecting food, farming and land-use in the United States. In a country consecrated to private-property rights and free-market ideals, it might seem hard to fathom that a single piece of legislation could wield such far-reaching influence. But to a large extent, the Farm Bill determines what sort of foods we Americans eat (and how they taste and how much they cost), which crops are grown under what conditions and, ultimately, whether or not we’re properly nourished.

What can we citizens look forward to for the Farm Bill’s $300 billion price tag?

— Cheap corn and soybeans for feedlot operators that maintain animals in confinement factories, spreading disease, greenhouse gases and labor abuse wherever they set up shop. (Farm Bill “conservation” programs will even pay $450,000 for the construction of lined pits which feedlots can fill with toxic concentrations of manure.)

— The continuation of a wildly successful federally funded obesity campaign, which ensures that the cheapest foods in our supermarket aisles and convenience outlets are laden with processed flours, refined sugars, saturated fats, unhealthful meat and dairy products, and an excess of subsidized calories.

Sure, we’ll hear a lot about “forward-looking” new programs that will help get us on the right track. But it’s important to look behind the rhetoric and find out just how the deals are made.

We’re supposed to get excited, for example, about a USDA snack program that will help 5,000 schools and 4.5 million children “eat healthier.” Let’s do the math. According to the U.S. Department of Education, there are over 93,000 public elementary and secondary schools in this country with nearly 47.5 million students. There’s a sizable private and charter school population as well. Each child lucky enough to participate in the program will get two-thirds of an apple a day, according to school chef and nutritionist Ann Cooper.

Then there are the “energy independence” programs we’re hearing so much about. Decades of environmental-protection gains are being threatened as farmers take lands out of conservation programs to cash in on the corn-ethanol gold rush. On the one hand, using corn for agrofuels does make feed more expensive for feedlots, making family-farm-raised options a lot more reasonable. But corn farming is dependent on boatloads of toxic pesticide and fertilizer applications, and is extremely hard on the land and aquatic systems. Ethanol production also consumes enormous amounts of fresh water.

You can also follow the money. The USDA’s very own Farm Bill website, for example, posts a map of subsidy recipients who live in Manhattan. Attempts to limit the amounts of adjusted gross income (currently at $2.5 million per operation) and the number of those eligible for farm payments have consistently failed in recent decades. This year, both the House and Senate are proposing downsizing those income tests, but any millionaire with a good legal and accounting team will find a way around them.

A bipartisan amendment from senators Byron Dorgan, D-N.D., and Charles Grassley, R-Iowa, would cap total farm payments at $250,000 and require subsidy-receiving operations to be owned by actual working farmers. This would be quite an improvement over the current loophole-ridden policies, and a way to free up funds for other urgent priorities. (As of this writing, there’s still time to call your senators and ask them to support the Dorgan-Grassley amendment.)

As obscene as recent farm-payment programs have become (over $1.1 billion were paid to deceased farmers between 1999 and 2005 according to Washington Post reporter Sarah Cohen), it’s important to remember that it’s a real privilege to have a Farm Bill to debate.

The Farm Bill is our chance to set the food and farming system on the right course. It’s our chance to compensate land stewards and food providers for things the free market doesn’t value. It’s our chance to create an actual healthy food and healthy land ethic. As an old saying goes, it’s our chance to put the “culture” back into “agriculture.” The Farm Bill matters because it can actually serve as the economic engine driving small-scale entrepreneurship, on-farm research, species protection, nutritional assistance for food banks, school lunches made from scratch, habitat restoration and low-petroleum input farming systems, to name just a few. Our challenge may not be to abolish government supports altogether, but to ensure that those subsidies we do legislate actually serve as valuable investments in the country’s future and allow us to live up to our obligations in the global community.

There is still time to have a say. Every day we can vote with our forks by buying from local farmers, supporting organic producers whose practices we know and approve of, visiting farmers markets when we can. But we only get a Farm Bill every five years, and the decisions made in federal policies will affect all of us on a daily basis. It’s time to let every one of your elected officials know that you have them on notice, that you vote with your fork and you expect them to vote as if the nation’s very health, future and security is at stake.

Dan Imhoff is a Sonoma County resident, independent publisher and author of many books, including ‘Food Fight: The Citizen’s Guide to a Food and Farm Bill.’