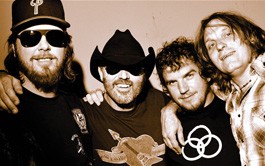 The Supersuckers, quite plainly, rock your ass

“The Greatest Rock ‘n’ Roll Band in the World”? By tradition, this honorable title still belongs to the Rolling Stones, though later bands like the Clash and U2 have held the brass ring of “greatest band” glory. Indie underdogs the Supersuckers unapologetically apply the term to themselves, asserting without irony that they are the champions of rock’s real values: hardcore roots-punk, no-bullshit country-rock and true-grit bad-ass boogie. Thing is, they’re right. The Supersuckers are a rare act, like AC/DC, that succeeds by purposefully promoting plain simplicity as a populist victory, preaching the gospel of beefy no-frills rock to fans for whom trends are useless.

Formed by high school buddies in Tucson in 1988, the Supersuckers relocated to Seattle in the early ’90s just in time to catch the buzz of the grunge scene. Their honest desert-soaked cow-punk was nothing like grunge’s acrobatic dissolution, and yet they still spent the ’90s on seminal Seattle grunge label Sub-Pop. After flirting unproductively with major labels, they finally formed their own label Mid-Fi in 2001. The band tours incessantly, with gigs almost every other night, and has released nearly a dozen live documents. Lead preacher Eddie Spaghetti is a busy blogger, and his theme is always the same: Thank you, awesome fans, for embracing our awesome rock ‘n’ roll.

The Supersuckers work up a righteous roots sweat on their latest disc Get It Together. Rousing stompers like “I’m a Fucking Genius” and “I Like It All, Man” are position statements that defend the band’s claim of greatness with Ramones-like clarity. A reflective heartfelt edge emerges on “Breaking Honey’s Heart,” while the melodic country-rocker “Sunset on a Sunday” is both peppy and sad.