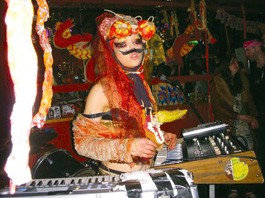 In 2007, Jim Marchbanks decided to set up shop outside My Friend Joe, a coffee shop near the Sebastopol Plaza, and play his favorite music. Most people enjoyed it, and started referring to Marchbanks as “that DJ in front of the coffee shop.” The name stuck, but so did calls to the police, and the West County character known as A DJ N Front of a Coffee Shop was forced to find an indoor venue. “So that’s when I started gradually to think,” he recalls now, “that instead of just DJ music, I need to find people who are performers.”

And find he did. Scouring MySpace for bands open to sharing a drastically varied bill, he rented Sebastopol’s Odd Fellows Hall and called his first festival of local bands JamSessions. Eight all-day shows later, exceptional in Marchbanks’ JamSessions shows have since been an open door to noise, experimental and avant-garde pioneers—as well as a refreshing mashup of wildly disparate musical styles. “Since I’ve been doing this,” he says, “some performers have declined because they say, ‘This doesn’t fit with my type of music.'”

Most, however, say yes, and this weekend’s JamSessions brings together Marchbanks’ biggest and most eclectic lineup yet. On the bill is an African drummer, a noise ensemble, a reggae group, an indie rock band, a Latin fusion group, a laptop glitch-hop artist, a metal band, a percussion-drone quartet and a teenage girl playing ukulele. And that’s literally just the half of it—there are 18 performers in a nonstop juggernaut of sounds for the open-minded going on this weekend. At 83 cents a band, how can you lose?