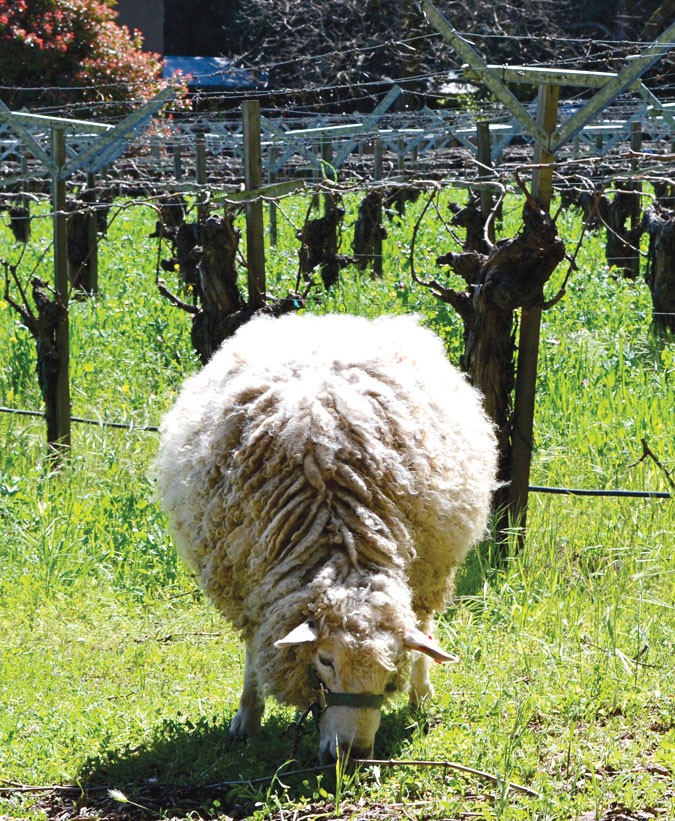 The many flavors of Tres Sabores

At the end of a less-traveled lane on the edge of Rutherford, a bluebird rests on a vineyard wire. Sheep bleat under the picholine trees. Guinea fowl peep from the poultry pen. Big, golden labs nuzzle a newborn black lamb with careful curiosity.

Manure, hay and the skeletal remains of last year’s grapes fill compost bins four feet high, and haunt the air with earthy aromas. And winery owner Julie Johnson is taking a break from prepping the faded, little red building for a fresh coat of paint—barn-red.

A former public-health nurse, Johnson and then-husband John Williams bought the property in 1987 when they were riding a wave of success as co-owners of Frog’s Leap Winery. Despite Rutherford being King Cab country, Johnson has kept eight acres of the original 1971 Zin planting. At first, she turned the grapes over to three winemakers who created three different expressions of the wine; thus, “Tres Sabores.” She began making her own wine after leaving Frog’s Leap in 2000.

Partly because she feels that wine tastes better when there are good people in the cellar, but also to help pay for the cellar, Johnson takes in a few custom crush clients. Even the guinea fowl must contribute—during a recent visit, FedEx carted off a box of them, headed for a winemaker dinner in Arizona.

The decor and vibe at the garden tasting room here is more “funky country art studio” than “Napa wine country.” When the weather’s fine, picnic table seating is the thing. As eager to talk about pomegranate trees as grapes, Johnson often pops by to encourage visitors to taste a pea shoot from the cover crop or a fresh grape off the organically grown vines. “I probably talk about everything else but the wine,” she says.

In season now, the 2013 Farina Vineyard Sonoma Mountain Sauvignon Blanc ($26), a direct and floral wine of lychee, pear and Canary melon, is aged on the lees in stainless steel, making a nicely rounded refresher. Tie-dye on the Zin bottle represents one of the many colors and patterns of duct tape Johnson uses to identify lots of wine in the cellar—leopard print is for “wild” yeast. The 2011 Estate Zinfandel ($38) is toasty, plummy, grapey, big and toothsome, spicy with peppers and Mexican chocolate. Smoky and meaty, with ginger cake spice and composty blackberry fruit, the 2010 Guarino Vineyard Calistoga Petite Sirah ($45) reveals the brooding spirit of last year’s grapes. It wouldn’t be Rutherford without a 2010 Cabernet Sauvignon ($80); it wouldn’t be Tres Sabores without pomegranate-infused golden balsamic vinegar ($22).