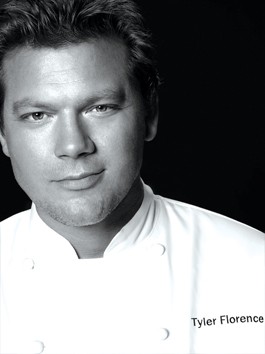 Opened in March under the ownership of rock icon Sammy Hagar and celebrity chef Tyler Florence, the long-awaited El Paseo House of Chops is a twinkling gem in the mostly dreary Mill Valley food scene. Built in 1947, the spirit of the historic restaurant’s origins has been revived with the addition of handsome leather banquets, flickering lanterns, large fireplaces and brickwork galore. Jazzy supper club music plays softly in the background (the 400-song mix was created by Hagar himself). The labyrinth of intimate rooms, passageways and garden patios is filled with romantic nooks and retro charm.

Reconceived as a modern American steakhouse, the new menu at El Paseo features a range of accessible dishes expertly executed by chef Preston Clark, who worked for Jean George Vongerichten in New York, and whose father, Patrick Clark, was one of the first “celebrity chefs” in the 1980s.

Upon arriving at El Paseo on a recent weekday evening, my date and I start off with a glass of sparkling rosé in the bar room, where we run into the owner-chefs of two successful Marin eateries snacking on appetizers, one of whom leans in and advises, “It’s not cheap, but the porterhouse might be the best steak I’ve ever had.” Moments later, we settle into our corner table aside the large stone hearth in the back dining room. A small cast-iron pan filled with Parker House rolls slathered in pesto arrives swiftly, delivered by a bow-tie-sporting waiter.

Starters range in price from $8 for a heaping plate of roasted shishoto peppers to a decadent foie gras terrine at $28. With our meaty main course in mind, we sensibly opt for a light salad of Bibb lettuce, pickled radishes, nasturtium, avocado and grapefruit ($9), an exquisite combination of textures and sweet and savory flavors. A trio of creamy devilled eggs follows, topped with bits of crunchy bacon, a smidge of salty caviar and a small piece of sweet tomato (also $9), which make for three luxurious bites.

The menu’s most spectacular offering (and priciest, at $89) is the 34-ounce California Holstein porterhouse for two. Slightly less expensive and thus more popular (“They fly out of here,” our waiter told us) is the 24-ounce Holstein ribeye for $63. Aside from these two indulgences, the entrees range from a $16 wild mushroom risotto to a $29 veal chop.

If you can spring for the porterhouse, you won’t be disappointed. Cooked to taste, the caveman-sized steak is sliced in the kitchen, topped with herb butter and served with a head of roasted garlic and a choice of four sauces: béarnaise, au poivre, creamy horseradish or El Paseo steak sauce; all are excellent. The dry-aged meat is filled with rich flavor, and there’s easily enough to feed three or four with a few sides. We polish off the accompanying creamy mac and cheese and whipped potatoes ($8 each), but leave our too-dry hash browns mostly untouched.

For dessert, warm doughnut holes filled with tart lemon curd are delicate and lovely, but a bit of a letdown after the porterhouse, the memory still lingering. Is it, in the words of the local chef, the best steak I’ve ever had?

To be honest, it’s damn close.

Next ArticleAcross the Bridge: June 29-July 6