When even life on the streets requires constant connectivity, the North Bay's homeless embrace creative uses of modern technology 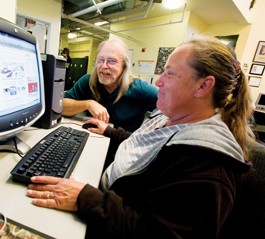 Every morning Bobby wakes up at 4 or 5am, packs up his belongings and walks a mile to stick his ankle in a wall socket.

After arriving at the Redwood Gospel Mission in Santa Rosa, he’ll usually get a good 20-minute charge before the room fills up for mass. But it’s not enough. After breakfast, he and a group of guys in similar situations—homeless people with something electronic to charge, be it an ankle monitor like Bobby or a cell phone—walk a mile to the fish sculpture by the Prince Greenway bike path. Public sockets are scattered throughout the path, but only the three by the fish are “hot,” or have power. Bobby and the others have to take shifts plugging in.

Bobby and his group of friends are just one example of how the Sonoma County homeless population is using technology in ways that either mirror the rest of society—the necessity of a cell phone—or are unique to the homeless, like finding a place to charge an ankle monitor for three hours a day to avoid getting sent back to prison.

“I have to admit, when I first saw a homeless person with a cell phone, my first reaction was ‘You can’t afford that!’,” says Jeff Gilman, executive director of the Redwood Gospel Mission. “And yet, in the grand scheme of things, if it’s done properly, if you don’t have a goofy $100 a month plan like some of us do, that is a powerful tool to help someone get off the streets.”

The rise of cell phone use among the homeless can be traced to the mobility and increasing affordability of phones. Kmart has a wall of pay-as-you-go phones, where people can plunk down 30 bucks for 160 minutes of talking, and MetroPCS boasts $40-a-month plans. There’s also the disposability factor: if the phone gets lost, or if there’s not enough money to pay the bill, users can simply buy a new one next month.

“Six years ago, it’d be rare that half the people had a cell phone. Now it’s rare that our homeless population doesn’t have a cell phone,” says Bill Hess, director of operations at the Mary Isaak Center in Petaluma. Hess estimates that 80 percent of the homeless people he sees own cell phones and believes that when smartphones become cheaper, they’ll become more popular among the homeless for the advantage of having two devices—a computer and a phone—in one.

That’s because computers, too, are becoming increasingly crucial tools of survival for those without a permanent roof over their head. Both the Redwood Gospel Mission and the Mary Isaak Center offer classes for their residents in basic computer skills—Word, Excel and database management are the basics. “We help people understand where things go when you say ‘Save,'” says Gilman.

Then, of course, there are public libraries. “We are a haven for many people,” says Debbie Hand, branch manger of Santa Rosa’s Central Library. “There are definitely people who are homeless using our equipment because there’s no charge and you just have to have ID.”

Everyone with a library card has access to a computer for an hour per day, which can be used for tasks from searching for jobs or housing on Craigslist to working on resumes. “It is used by a lot of people who are forced into using computers to look for jobs,” says Hand.

Furthermore, applying for unemployment can no longer be done in person but has to done through fax, phone or online, says Hand. She’s helped many people whose first interactions with a computer were learning to apply for unemployment.

Hess, too, points to the necessity of computers and cell phones for job hunting. Though many homeless shelters offer voice mailboxes for their residents, the outgoing message can dissuade employers once they realize a potential employee lives in a shelter. A cell phone number gives a homeless person autonomy and a leg up.

But even still, it may not be enough. A certain union in Sonoma County has recently instated a policy to call only members with landlines for work. Stymied, a Mary Isaak resident who only had a cell phone went to Hess for help. Hess set the resident up with a Google Voice number similar to the landline at the shelter and linked it to his cell phone number. The union called the Google Voice number, and the resident got a long-term job in Healdsburg and has since moved out of the shelter.

In certain situations, homeless people are using technology to conduct successful businesses remotely—without an office or even a permanent place to sleep.

Residents at the Mary Isaak Center have run internet stores, operated PC support websites and completed contract computer programming from their laptops while living at the shelters. Masaba Hood, who taught martial arts for over 20 years at San Francisco State and SRJC, and has been homeless for the last four months, uses his cell phone to keep in touch with the clients who are his only source of income.

“You gotta have a phone,” Hood says. “If you don’t have nothing, you at least have that phone, that communication.”

A military veteran named Casey, homeless after being released from the hospital and recovering from injuries sustained when a suicide bomber hit him, uses his phone to talk to his daughters and his friends still in Iraq. Casey’s phone has internet, and he uses it to check Facebook. “I think it’s real important to stay connected,” he says. “If you don’t have contact with your loved ones and a support system, then you’re out here all on your own.”

Even a phone that’s run out of money also has its uses. Many use it as a clock to help them know when each shelter is serving meals, or as a practical necessity in the often-dangerous world of living on the street—even with no money left, a cell phone can still call 911.

“I want it to call 911 to tell them to pick up my dead, crippled, ugly, stupid, gumless body,” says Edward Herron, a Santa Rosa native who’s lived on the streets for the last two years. Herron has been assaulted while living on the street, and eight years ago he had a stroke that enhanced his senses (“I can hear a mouse peeing on cotton”) but left him with limited mobility from the waist down. His most recent phone is his third; he lost the last one, and still doesn’t know the number on the new one.

Herron carries with him a Discman—he’s partial to Bonnie Raitt and Tracy Chapman—that’s powered by batteries that he buys in bulk from Big Lots. Homeless encampments are often littered with used batteries, and many shelters work with conservation groups to keep the heavy metals from leeching into the water supply.

Homeless people in shelters are more likely to have cell phones and laptops than those who sleep on the street, like Ron Young. “They’re nice to have, but with limited resources, they may not be at the top of your priority list,” Young, a 20-year veteran of the streets, says of cell phones. Young was given a phone by another homeless person and used it until it ran out of money, but he doesn’t need it for socializing. As he points out, if he just walks around long enough he’ll find whom he wants to see.

But for people like Bobby, using technology isn’t a choice. He builds his days around finding a place to charge his ankle monitor, the result of a 32-year-old rape conviction and a string of violence and drug charges. He can charge up at shelters and churches, where he competes with others for a spot in the wall or a hot public outlet, for an hour and a half in the morning and evening. His sister recently bought him a power pack from Radio Shack that stores four hours of charge so he can run a wire down his leg, stash the pack in his pocket and charge while walking, riding a bike or working. Other guys with monitors—Bobby estimates he knows about 12 guys in similar situations—have taken to carrying around power strips to add more outlets to charge.

As much as his bulky ProTech monitor is a physical annoyance, the consequences of not charging it are worse. If he fails to charge, it buzzes three times, and he has 45 minutes to charge it before his parole officer receives notice of the violation. The other day, Bobby was en route to buy sandwiches when he felt the buzz. Within 15 seconds, he had his power pack whipped out and plugged into his ankle.

“It’s instant panic, because you’re talking about your freedom,” he says soberly. “Nobody wants to go back.”Bobby’s had his ankle monitor since February, and he’s got 32 more months to go. “For three hours out of your day, you’re married to a wall socket. And it really curtails what you can do,” he says. “It kind of sucks to be me, [but] I earned a lot of this for my past behaviors. I just keep thinking about what St. Paul was talking about, about being content in any situation that God had him in.”

Next ArticleAcross the Bridge: June 29-July 6