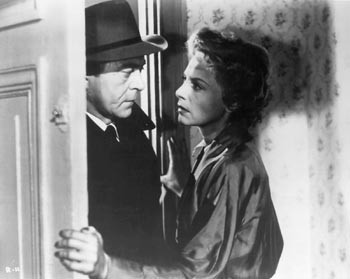 DEPENDING on whom you ask, the title means either “rumble” or “trouble” in the French argot. Indeed, the 1955 film Rififi was in trouble. The most readily available prints were haphazardly subtitled, with by-now archaic British slang translating the pungent French dialogue. Even if you could read the subtitles–no easy task against the white background–you’d be confused by curious words like “busies” for cops or “charlies” for breasts.

But in a new print and newly written subtitles, a viewer in the year 2000 can just coast along for one smooth ride.

Rififi is a film vastly cooler than the recent Croupier. It concerns a pack of old-school gangsters cracking into a jewelry store in the Rue de la Paix in Paris. The burglary is engineered by a revered but played-out career criminal named Tony Le Stephanois, played by Jean Servais. Le Stephanois is freshly out of jail, out of money, and out of time–he’s got an ominous cough that isn’t soothed by his chain-smoking.

His young friend Jo (Carl Mohner), who owes him a debt, tips Le Stephanois to the possibilities contained within Mappin et Webb’s jewelry store. The original plan is for a smash-and-grab robbery, but the elder criminal has his eyes on a bigger prize and recruits a team for the all-night burglary.

Rififi’s director, Jules Dassin, was an involuntary American expatriate, previously best known for the original version of Night and the City. Dassin was a blacklisted Communist who had come to make movies in France.

There’s social commentary in Rififi, if you’re looking. Only a man who believed in the dignity of labor could have brought such affection to watching the hard work of the thieves. The famous, much-imitated robbery in Rififi has the gang as intent as surgeons. These 25 silent minutes of precision safecracking wring tension out of the closeups on the tools and the methods. It’s like This Old House gone rogue.

Dassin, using the pseudonym Perlo Vita, plays Cesar, the well-dressed Milanese member of the gang. Since he’s a foreigner, Cesar doesn’t say much. You can see why Dassin picked the part–he’s suggested that his reason for making the safecracking scene mute was because of his imperfect French.

Rififi is a Paris-fancier’s delight. The scenes of Montmartre at night are invigoratingly sordid, as are the misty hungover-looking dawns. Dassin also brings economy to the smaller, subtler scenes, such as a child horsing around with his lounging godfather at the start of the film.

When you see this neglected film-noir classic, you understand why it was so popular; the loyal but ruthless gang with their cigs and fedoras are part of a film with style to burn. Here are the roots for everything from Reservoir Dogs to Shoot the Piano Player.

Rififi was more than just a crime film. It was a kind of genre–at least eight films were made with “rififi” in the title, none of which were sequels. Moreover, Servais’ last film was titled They Came to Rob Las Vegas; you can suppose what impact Rififi had on his career. Servais proved that there’s no one as disillusioned as a good-looking juvenile actor who grows up and gets knocked around by life.

In Rififi, Servais is a beautiful loser as battered as Bogart. Yet Servais’ only other name part was as the voice of de Maupassant in Max Ophuls’ film Le Plaisir. It’s Servais who pronounces that film’s epigram, “Happiness, it isn’t a picnic.” The arch-cynic author was natural casting for someone whose dry voice had more than once pronounced doom on a squealer.