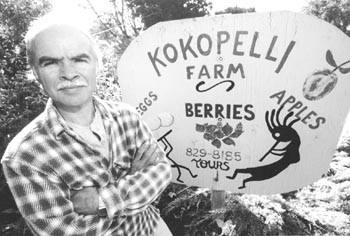 The No Spray Movement

THE GROWING No Spray movement considers the Nov. 7 approval of forced pesticide spraying to control the glassy-winged sharpshooter by the Sonoma County Board of Supervisors to be a declaration of war. Though the target is a tiny insect that can damage grapevines, blanket spraying would harm all insects, many animals, organic gardens and farms, and public health.

Activists among the 300 people attending the daytime four-hour Election Day supervisors’ meeting were outraged by the 5-0 decision and pledged resistance. “This matter will be decided in the streets and at people’s homes,” asserted Sonoma Valley homeowner Will Shonbrun. Civil disobedience, hunger strikes in jail, blocking roads to their homes, and shutting down Highway 101 were mentioned as possible tactics. “We can do far more damage to the wine industry’s public image than this tiny insect can do to the vines,” one west county organic orchardist commented.

When I first heard about the possibility of forced spraying, I did not think that anyone who believes in civil rights and private property would ever approve coming on my organic farm without my permission and spraying poison, thus destroying my livelihood and threatening my health. I have spent years working hard on my soil and attracting beneficial insects. Dozens of friends and customers have volunteered to come to my farm to help me defend it if the government attempts an assault by deadly weapons–toxic pesticides. We will make our stand here, as French villagers have against Mondavi’s corporate/industrial intrusion on their traditional ways of making wine and as French farmer Jose Bove has against McDonald’s.

Good agricultural practices, like bio-pest management, are the only solution to such problems, rather than the attempted quick fix of bombarding an area with poison. Organic grapegrower Michael Topolos of Topolos Vineyards in Forestville commented, “I welcome the sharpshooter; my beneficial insects are hungry.”

Over 60 citizens testified against forced pesticide spraying at the Nov. 7 meeting. Half a dozen grapegrowers spoke for the workplan authorizing forced entry of people’s yards and private properties against their will. Despite overwhelming opposition, the supes approved the workplan, which No Sprayers call a “battleplan,” designed to protect vineyards at any cost.

Mothers with infants in their arms, cancer and asthma survivors, physicians, organic farmers and gardeners, victims of pesticide poisoning, scientists, and elected officials testified against the vague workplan. Sonoma Mayor Larry Barnett and Sebastopol City Councilmember Larry Robinson joined representatives of the Town Hall Coalition, the Mendocino Environmental Center, and Earth First! A petition with more than 4,000 signatures against pesticides was presented by West County Californians for Alternatives to Toxics, and the No Spray Action Network presented another petition with 1,300 signatures against forced spraying.

Sierra Club leader Lucy Kenyon testified, “This ’emergency’ is not a public health crisis, but it could become one with the widespread application of toxic pesticides. Your plan does nothing to address the special needs of people with illnesses that would be aggravated by pesticides.”

The nerve toxin carbaryl has been used elsewhere against the sharpshooter and is the most likely insecticide to be employed here. It causes cancer in animals and is listed as a possible human carcinogen. Carbaryl is a pesticide that poses great risk to public health. It is particularly hazardous to infants and children, the elderly, people on chemotherapy or with a compromised immune system, and pets, birds, honeybees, and other beneficial insects. It can cause nausea, stomach cramps, diarrhea, blurred vision, muscle paralysis, and convulsions.

California Certified Organic Farmers spokesperson Diane Cooner criticized “the mandatory treatment of organic farms” and “the mandatory exposure of people to synthetic pesticides against their free will. Wholesale application of broad-spectrum pesticides to control pests is not successful.”

CCOF supports alternatives to pesticides, “A pest such as the glassy-winged sharpshooter can only be controlled with the use of a wide range of enviromentally sound practices that provide for a diversity of predatory insects, diverse cropping patterns, habitat diversity, physical controls, disease-resistant varieties, and naturally derived least-risk toxic pest control methods.”

Meanwhile, Napa County supervisors have been more responsive to public outrage. Napa citizens helped write their county’s plan and on Nov. 7 were able to further delay a decision in order to allow for more input. Whereas Sonoma County’s 30-page plan is vague and lacks adequate detail, the more comprehensive Napa plan is already 150 pages long.

The Napa Sierra Club’s Chris Malan says, “The Sierra Club opposes all spraying for the sharpshooter, both by ground and by air.” The Friends of the Napa River also notes that any plan must include “pesticide buffer zones along riparian corridors to protect our water and aquatic life from contamination.”

Though the Sonoma County counsel asserts that the workplan is not subject to the California Environmental Quality Act, Napa citizens have hired an attorney to argue that all sharpshooter workplans are subject to CEQA. Under CEQA’s environmental protection, blanket forced spraying–which would harm wildlife and water quality–would be illegal.

Many specific objections to Sonoma County’s workplan have been raised. For example, the agricultural commissioner has already taken down the sharpshooter traps for this year, since the insect will not arrive until spring, at the earliest. So why rush through a workplan from an ad hoc committee that had no public input? Letters attached to the plan came only from pro-spray, chemical-industry-funded University of California scientists, and the wine industry. Excluded from the workplan were any of the many letters against forced spraying, including those from organic grapegrowers like Michael Topolos.

Opponents of the workplan are particularly disturbed that the state can declare an agricultural emergency and suspend people’s civil rights. Ag Commisioner John Westoby can determine that an “immediate hazard” exists and spray a person’s yard without notification or the opportunity to appeal. Someone could come home from work and find his/her organic garden and pets sprayed with highly toxic nerve poisons and have no legal recourse.

On Nov. 7, several speakers expressed “no confidence” in Westoby. “We need someone who won’t sacrifice our health for the wine industry,” declared Tara Treasurefield of the Town Hall Coalition. The approved workplan describes an “infestation” as only five insects found within a 300-foot radius within five days. Rural resident Dwight Sims wants citizens to be given the option to eliminate the insects themselves, before the government rushes in with chemicals.

Ag commissioners in the neighboring counties of Mendocino, Napa, and Marin all seem more responsive to the concerns of citizens. Toxicologist Marc Lappé, former head of the state Hazards Assessment Program, has written, “Nobody’s going to die from the sharpshooter, but somebody may die, particularly the most vulnerable, if exposed to pesticides. Pierce’s disease is not an emergency health situation. It’s an emergency dollar situation.”